All right, RetroFans. Let's crack the cork on three more vintage titles for the console heard round the world during the 80s. The NES library is more like a jungle than a well, and it's easy to get bogged down. Thankfully, the breadth of titles

All right, RetroFans. Let’s crack the cork on three more vintage titles for the console heard round the world during the 80s. The NES library is more like a jungle than a well, and it’s easy to get bogged down. Thankfully, the breadth of titles has allowed me to present a variety of games to you, as well as my varied opinions on them. We love the shooters, we love the platform action, we love the sports and the puzzles. Well, some of us don’t like puzzles too much. We love the RPGs, the racers, and the games that defy category. We love the NES, we can’t help ourselves, and if loving this grey chunk of plastic is crazy, then I guess you’d better strap me in my straitjacket and give me a jolt. It won’t change anything. This is the system I cut my teeth on. Well, this and DOS… but that’ll be another three-parter. Without further flitting about, let’s come out the tail-end of this one!

Lately I’ve been taking time to really read up (and watch countless fantastic documentaries) on the world wars. The air and sea duel between US and Imperial Japanese forces in the Pacific Theater during the Second World War remains one of the most gripping, dramatic conflicts of the 20th Century. It continues to stir the human spirit and the imagination of gamers in various forms, but when I was a young’un, 1943 was what got my pulse pounding.

Let me take a moment and assure our readers of something important: I am talking about a video game by Capcom, and will offer no intentional slant either way on a conflict fought long ago by men who have now mostly passed on. All opinions expressed are pertinent to the 1988 NES port of an arcade game, not WWII itself.

With that covered, Capcom made one hell of a riveting action shooter out of this piece of history. The titanic conflict is taken from history to hyperbole, presented in a suitably intense form, and yet it still ends up an easily enjoyable breakneck plane shooter. Your brave little plane starts off as the factory-direct model, but there is some decent opportunity to enhance it along your way, as well as lovely power-ups to wield against your foes in the air and at sea. Levels are divided into high-altitude approaches and the death-defying attacks launched on carriers and other ships. The pacing and nature of the action can give you the feeling of a bona fide flying ace, but be careful… 1943 is war. As you fight through swarms of enemy fighters and outward defenses, you must take great care to keep yourself sharp for the “boss” fights against gigantic destroyers, screen-spanning super planes, and everything the Imperial Navy has to throw at you. 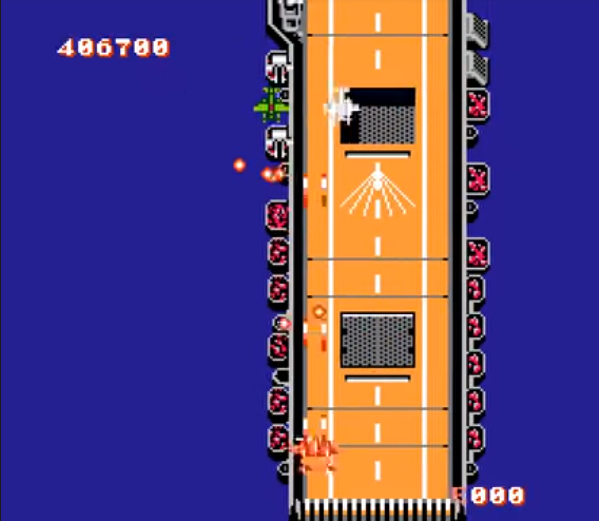 The hottest dog of the hot-doggers, you take on the Imperial Navy all on your lonesome. The grit was never grittier on the 8-bit screen.

The graphics are adequate, with some nice color and detail on the big stuff, which gives the epic feel an extra dose of flavor. The music has its good moments, but none of it sucks; this is after all a Capcom title. SFX takes no backseat either, all of it being at least on par with if not exceeding its contemporaries in the genre. All in all, it is a fine port of a very fun arcade game that I fondly keep in my rotation when I open the emulator and strap on my flight harness.

1943 gets an easy 7 out of 10 for me. It’s an easily approachable but healthy challenge for fans of the shmup genre, with plenty of its own twists and goodies to keep you interested.

Not too long after early RPG titles for the NES began enjoying notable success, the idea of combining RPG elements with real-time action game play was tossed about by various developers with varying degrees of success. Crystalis (called God Slayer: Haruka Tenkū no Sonata in Japan) is a title that sometimes gets overlooked. Modern and past reviewers have had mixed feelings about this one, but I feel that Crystalis is one of the more entertaining and effectively-framed RPG style stories that hit the NES.

It’s a game with a relatively detailed plot, so I will avoid revealing too much in case you’ve not played and decide to give it a try. The important part of the beginning story is that you awaken from cryo-sleep years after a nuclear conflict that greatly changed your world. As things progress, you find that you may in fact be the one meant to save this new and dark place you wake up to.

Both your allies in the world’s remaining civilizations and your enemies throughout the spaces between are varied and interesting; your quest will carry you far and wide as you take back the world from the evil empire that has risen in the wake of the nuke war, requiring not only brawn but combat skill as you master your sword and magic. There are also some Zelda-esque puzzles along the way, though none of them are so convoluted that a thinking player will find them insoluble. You gain levels and improve in prowess as the plot unfolds around you, but your efficiency in doing so is mostly dictated by good ol’ fashioned thumb-dancing. 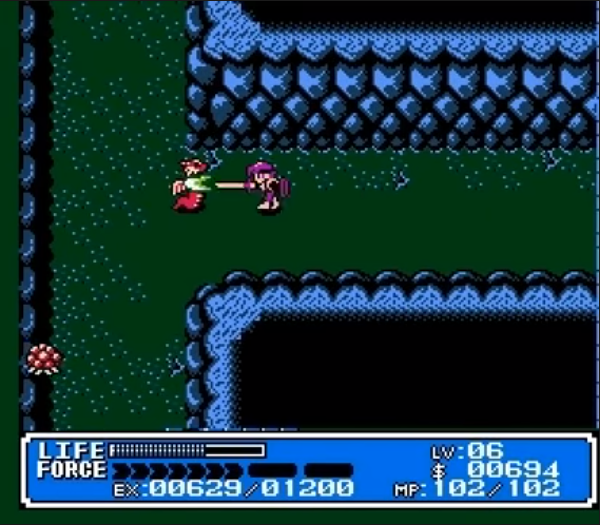 Sure, you do a shit-ton of stabbing during your adventure. But Hell, that’s an action RPG staple!

The graphical presentation is more than appropriate, with familiar tropes and new surprises alike. It’s nothing to rant and rave about, but it’s a satisfying spread. Other reviewers have faulted the game for certain challenges being just “button-mashers,” but I disagree; careful and clever play will not only bear you out of trouble, but prove more efficient in slaying your foes. The music is pretty good, but it suffers in places like underground “dungeon areas” from a bit of repetitiveness. Sound effects come out on a similar plane, being decent but nothing to write home about. In my view, the play itself saves Crystalis from being mediocre or plain. The story (again, trying to avoid too much exposition here) is also an engaging and suitably “RPG-like” tale laced with mysticism and heroism, not to mention some great villains.

Crystalis pulls down a 6 out of 10 from me. I like to play it as an action-adventure game, its depth is reasonable without being too elaborate, and its overall presentation is satisfying if not truly stellar. It’s worth a look for anyone who enjoys the hybrid of action and role-playing.

Here’s the one I shit on, folks. Not even because it’s that terrible… it’s just kind of a letdown. To address the elephant in the room, it’s essentially just more of what we saw in the NES version of the TMNT arcade port. It’s more than playable, but it’s just a reuse of something they did only a couple of years before, Very little effort to add much new dynamism or excitement… I mean, they didn’t release the actual Super Mario part 2 here until All-Stars, for this exact marketing reason. “Will they swallow the same pill twice?”

The answer is yes. We did.

WAIT, THOUGH. Maybe I’m not being entirely fair. In the vein of some other beat ’em ups, this third TMNT NES game allows you to choose whether or not “friendly fire” is a factor in 2-player action. It also allows you to change your chosen turtle in between horrible deaths, and for a second player to join in the game in medias res during a 1-player session. Essentially, it’s an opportunity to make the game more similar to the arcade experience in certain ways. 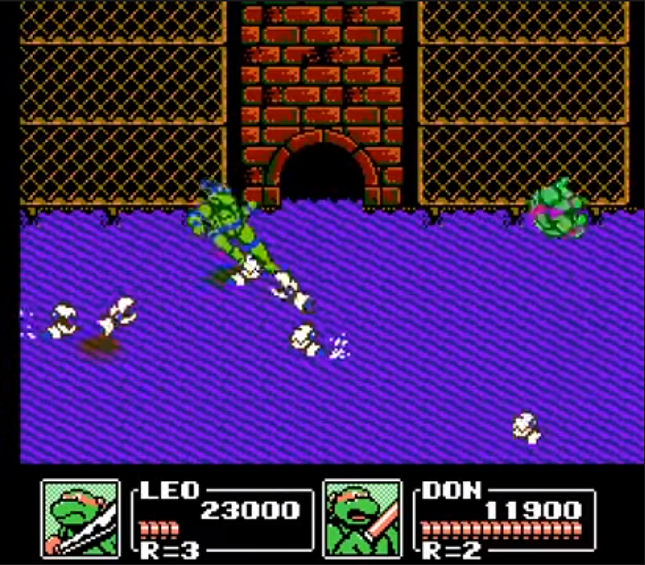 You tell me, folks. After all, you’re as opinionated as I am. Aren’t you?

I maintain that the formula changed very little and that you’re mostly just getting more levels to play in the style of TMNT II, but is that necessarily a horrible thing? At least the premise is exciting: Shredder has turned all of Manhattan into a floating fortress under his control, and the Fab Four must end their vacation early to return home and put a stop to their arch-villain’s plans once more.

The graphics really seem to have taken a hit, as far as I’m concerned. Things look just a little more goofy, but it’s still enough to get the job done. Just barely. The music… well, it’s Konami. Their taste in (and impressive variety of) BGM composition almost never fails, and this is no exception. It’s good, rollicking, authentic shell-kicking music. Otherwise the presentation isn’t too far from the previous installment in the series, and they even made a pass at a decent intro sequence for TMNT 3.

I’ll soften up and drop TMNT 3 a 6 out of 10. It’s comparable to its predecessor, with some neat little options added in, and if you’re after more of the same, you won’t be disappointed. Besides, even though I’m the final authority (sarcasm) on video games excellence, this ain’t all about me.

Keep your eyes peeled in March for another three-parter. Stay Retro!