Earlier in the month of May I paid some due respect to the platformer, that ubiquitous and well-loved game format that has seen countless iterations since its inception in the early 80s. Platformers are possibly the most well-recognized type of video game worldwide, even by

Earlier in the month of May I paid some due respect to the platformer, that ubiquitous and well-loved game format that has seen countless iterations since its inception in the early 80s. Platformers are possibly the most well-recognized type of video game worldwide, even by those few lunkheads or fossils who inexplicably have no interest in the hobby whatsoever. Unless you live under a rock, you know who Mario and Sonic are. That’s exactly why I’m not going to talk about them at length in this article. We’re gonna look at five more platform-jumpers today, and we’re not gonna limit ourselves to the NES this time.

So let me start off with one for the NES, since I just said that.

Data East made a game about a werewolf with swords for hands and released it in North America several months before releasing it at home in Japan. I like to imagine that the conversation leading up to this decision involved the statement, “the Americans will eat this shit up.” That’s what I’d say. And I’m American. We love our nacho hot dogs and our spicy-ranch burger nuggets, and we love our idea mashups too. We’re basically a nation of five-year-olds. I’m lumping myself in too, don’t worry. I am thirty-seven years old and still struggle with the idea that I’m not supposed to eat cake as a meal. I’m not looking down my nose at anyone here. Especially since the idea of a werewolf with swords for hands is pretty fucking cool. 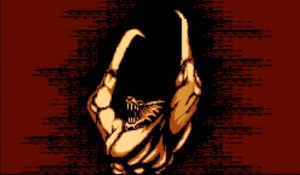 I, a proud American, am in fact eating this shit up.

There is a plot, but you can throw it in the trash along with the cellophane the box came wrapped in. Something about an evil doctor who takes over the world with mutants and how the world’s last hope is some werewolf with swords for hands. You have an ANGER METER that you fill with bubbles to get stronger/jump higher, and you pick up W’s to transition from man to beast and back. Being a man sucks. Be the beast. The beast that can still totally handle ladders with his sword hands and whose hourglass figure is the envy of all the ladies about town. 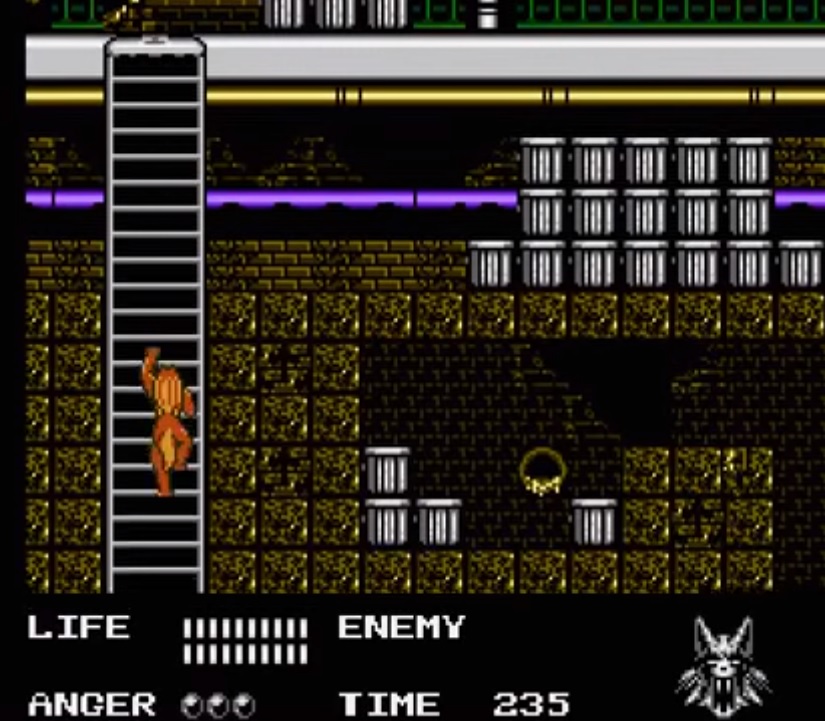 Pictured: them hips and them knife-hands totally working it… into a sewer.

I have no real complaints about Werewolf: The Last Warrior, nor does it really distinguish itself too strongly in terms of presentation. It has some pretty cool cinematic bumps in between levels, but after a little while it gets irritating to start a level and have a cut scene immediately interrupt it after you take like three fucking steps. I enjoy the separate mechanics of being a werewolf and being really fucking mad. Our hero can be absolutely furious AND/OR be a ravenous wolf-man, and I think it’s important to teach young people that being as pissed off as possible gives you superhuman power independent of any separate moon-shifting curse you may have. It’s part of the human condition. The music and sound are adequate, and most importantly, the fun factor is there. I got tired of WTLW less quickly than I expected. 7 out of 10 for a novel (if silly) concept done decently.

I’m sticking with “kind of sucked” because this game is playable. It’s just not as awesome as Contra and made me want to play Contra again instead. It makes me imagine an executive showing Contra to some desperate and underpaid developers and suggesting they also make Contra. Compared to the werewolf with sword hands idea, this is fucking shameful. So, to risk sounding repetitive here: it’s Contra with a life bar, and instead of defeating an alien menace intent on ruling the world, you’re just some soldier asshole who “fights evil” (looks for trouble) worldwide. But be ready to basically play a slower Contra with shittier everything. 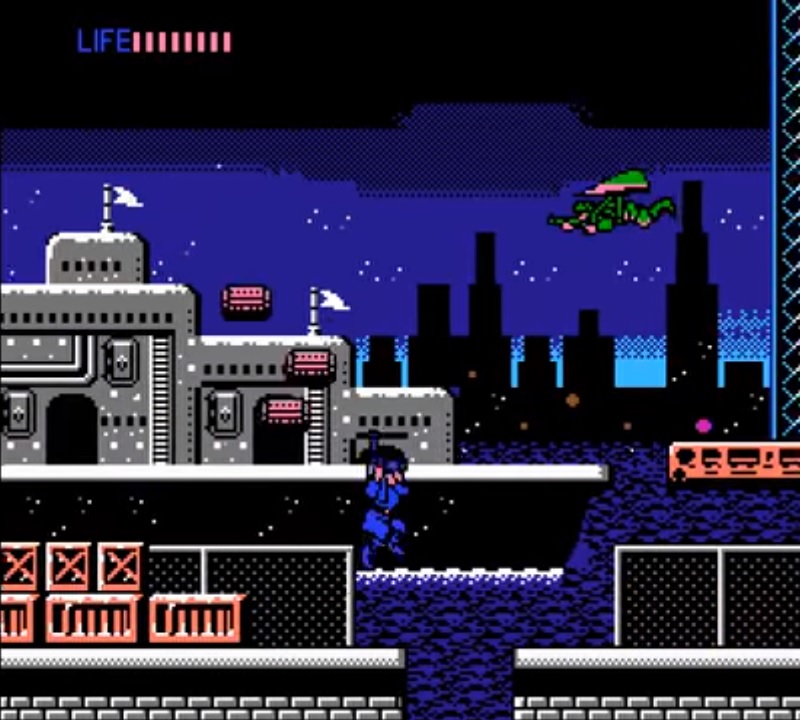 This is to art what a hammer is to a delicate porcelain plate.

I won’t call the graphics terrible, but I could. What I will call them, out loud and with a sneer on my face, is lazy. This is low-effort shit for 1990, and I’m including placement in that assessment, not just quality. Your audio experience will not be much better. Fuck it, it won’t be any better at all. I won’t lie or sugarcoat anything. I will give Cross Fire one positive appraisal: it isn’t totally unplayable if you can deal with:

3) feeling vaguely insulted by it

It doesn’t totally suck. It just mostly sucks, and only because it was allowed to. 4 out of 10 out of sheer contempt for Cross Fire.

In real life, the only powers that radiation will give you are the superhuman power to always be sick and the special ability to eventually die of radiation. Chelnov is another classic example of the trope we’ve never truly let die: a man who became a superhero instead of a charred corpse or a short-term hospice patient due to nuclear radiation. He’s an Atomic Runner now, and he’s running for his goddamned life from the KGB or some other “secret organization” that wants his powers for evil. Slings and arrows, man. Every fucking time. 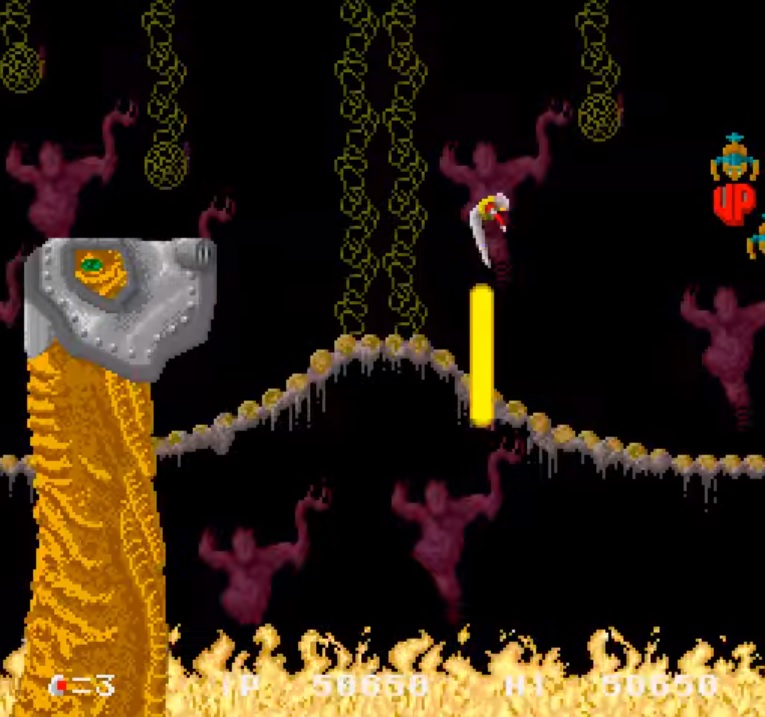 I don’t feel like it’s entirely outlandish that this makes me uncomfortable on some small level.

I know this is a forced-scrolling game, but it’s still very much a platformer; it’s like playing those “athletic” self-scrolling Mario levels in sequence while Data East throws some giant zombie arms and metal-helmeted fire dinosaurs in there for good measure. The scrolling only stops when it’s boss time. There are a variety of weapons and power ups (six counts as variety, shut up) to find, and you’ll want them. Part of what’s so fun about this game is just looking at it; both the arcade and Mega Drive versions are gorgeous for their time, especially some of the background art like the weird person-tree jungle and the Aztec-esque temple area. Chelnov also offers fantastic gameplay, combining a little bit of constant pressure (the nonstop movement) with a ton of action (everything is intent on murdering you, as usual).

My only complaint about it is possible burnout; I’m glad I took a shot at it on emulator so I could save my game state, just so I had a few minutes to look away now and again. I cannot imagine playing this shit in the arcade. Not only do I hate being watched by strangers, I also sweat at the most inopportune times and I’m sure I’d look like a Butterball turkey in a convection oven while playing this. 8 out of 10.

“At least it’s not any Spider-Man game.”

I am so tired of superhero-themed shit, especially the Marvel Cinematic Universe we’ve had force-marketed to us as a combo of sociopolitical “message” and barely-written entertainment. Feel free to email me if you would like to defend milady Marvel Comics at court. I have always liked the Hulk, though. The Hulk gets shit done in perhaps the most honest and cathartic way of any of Marvel’s woke-soap-opera characters: by absolutely losing his shit and stomping the bad guys a new asshole. 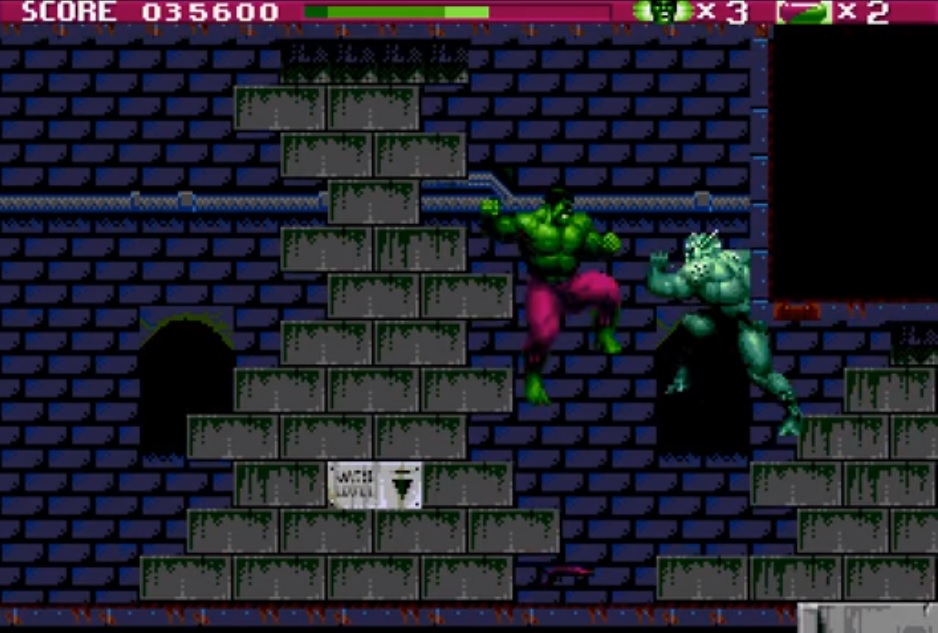 This is one of the few playable early-console-era games licensed by Marvel. I’ve talked about LJN and their sins against us ever since I started writing for NRW, and I will let God smash the gavel on that shit. This game is decent, despite being published by the eternal shit-puddle U.S. Gold. Probe kept this game simple without making it too vanilla. When you give me a controller and the Hulk is on the other end of it, I expect to be tearing shit up worse than Mike Mulligan’s Steam Shovel on a bender.

You don’t really get that here, but what you do get is a game where the Hulk isn’t a hapless clumsy asshole like every digital version of Spider-Man you saw during this era (except Maximum Carnage, that was fairly good). They can’t have you tearing down buildings all over the place or taking antitank rounds to the chest while laughing, but the Hulk still feels pretty Hulky. You get a decent set of special moves to beat up the Leader’s robots with, including bear hugs, head butts, and a very MK-esque uppercut. It is also decently difficult to harm the Hulk, despite his invulnerability being watered down for a video game. Things don’t get too challenging until they get weird later on in places like space. That’s where shit should start getting challenging for anyone.

Everything looks great, very much arcade-quality without diverging too far from the comics feel of the source material. The Hulk’s walk is kind of goofy, this weird arrogant stomp-march, but I guess he can walk however he wants. He’s the Hulk. Non-shitty digitized sounds are accompanied by an OST that sounds vaguely like the one for Sonic Spinball here and there (which is far from a negative thing). 8 out of 10.

This game is totally my kind of shit. Deep-ass fantasy lore intro (here is a link), elemental magic, a demon lord… shit, what else do you want?

You punch fireballs out of your hands and collect elemental rings to combine for use in your mystical ass-kicking of evil. If you ever played Castlevania: Circle of the Moon, it’s a bit like the DSS Card System, but way less frustrating and slow to build. Another neat angle is how certain types of monsters may be more or less vulnerable to certain elemental attacks; it’s a small but welcome element of basic strategy that adds a bit of additional satisfaction to giving the demon king’s minions an ass whooping. 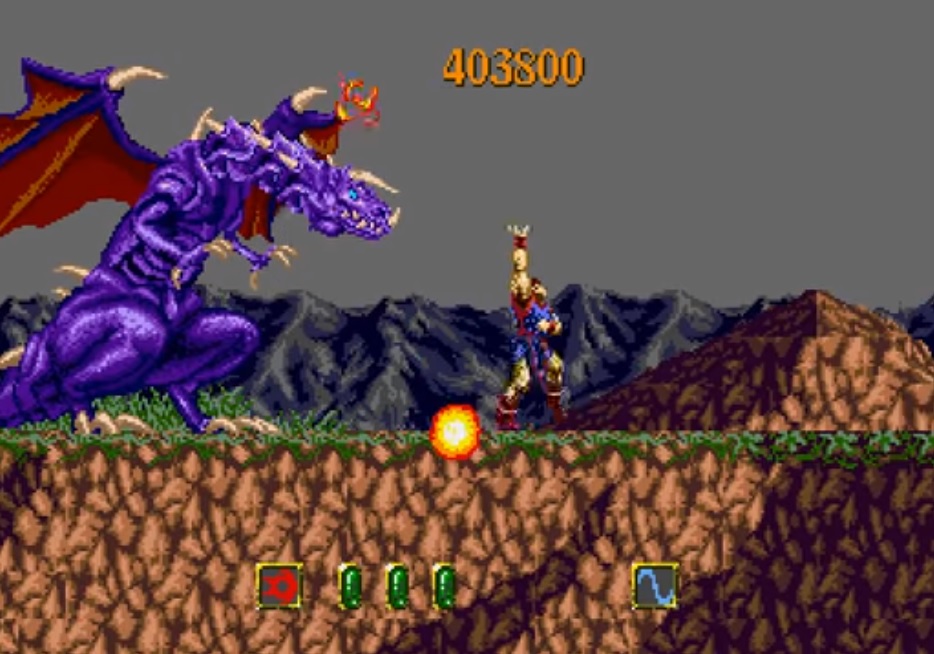 This dragon doesn’t stand a chance against me in the dance-off.

Like too few of its run-and-shoot platformer buddies, Jewel Master allows the player to aim and shoot upward, instead of just having things come at you from overhead and fuck you up while you sort of waggle your arms forward like John McCain and look foolish. I will never stop dunking on two things in this world: politicians and Mega Man.

It’s a Genesis game developed by Sega, so Jewel Master is pretty damn good all across the board. Its audiovisual artisanship is on par with arcade games of the era, as one would expect from the console itself, let alone games made by the console’s developer. The composer was apparently really into prog-rock, and it sort of shows in the soundtrack, which is probably my favorite part of Jewel Master by a nose. 8 out of 10.

That finishes out May, RetroFans. See you in June! Stay Retro!