While action has always been the point of video games (unless you really, really like Battle Chess or Anticipation), the means of representing the action have often changed to suit the technology. Before the pixels got all smoothed-out and the whole world shifted to 3rd-person

While action has always been the point of video games (unless you really, really like Battle Chess or Anticipation), the means of representing the action have often changed to suit the technology. Before the pixels got all smoothed-out and the whole world shifted to 3rd-person chase view, things were simpler. One could even say the video game world lacked depth, but we were okay with it… after all, you could still go all over the place in a platformer.

Donkey Kong is credited as the first true “platformer,” and you bet your ass I double-checked in Google because you’d think some obscure forerunner of that game would hold the title, but no, it’s just plain old fuckin’ Donkey Kong. Running around like a ninny and performing very unsafe long jumps at great heights would go on to become the basis of countless titles, because it really was the best game in town.

Platform titles were so popular during the 80s and 90s, in fact, that almost every developer tried making one just to see if it would sell. Sometimes these games were predictably shitty, but once in a while there would be a diamond in the sand, waiting for us to discover it and rent it three consecutive times and then forget to return it for six months so that the video store just charges us for it and it’s ours now… despite that gold sticker the rental store put on it. Today I’ve picked out five from the NES game library for us to dissect. Let’s make the first incision…

Now, this is not called Dragon Fighter because you go out of your way to fight dragons, but neither is the title only a vague reference to the mythical beasts. When you’re not prancing around as a warrior with a fondness for ornate hats and what look like spandex onesies, you can dead ass transform into a fucking dragon and tear shit up just about as severely as you’d expect a dragon to tear shit up. All this awesome shit is limited (of course) by a gauge that fills up in human form and then ticks down while in epic-murder-monster-myth-mode. 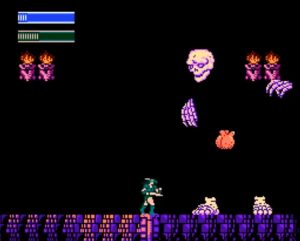 The jump-and-slash formula is pretty well-represented here, at least when you’re not in dragon form; when you change shape the game takes on an R-Type/Gradius vibe as you begin to gently “rail” to the right and shoot down oncoming threats with your color-coded dragon breath. The compulsion exists to just hammer through the game haphazardly in dragon mode, but I found myself saving up my dragon-time for whatever waited at the end of each stage. Gameplay feels good either way.

Unashamed use of color and a ton of variety really help the graphics stand out; we’re not looking at anything groundbreaking for a 1990/91 release for the NES, but it’s a decent looking game. Dragon Fighter’s audio experience is acceptable, but nothing to write home about. Composer Kouichi Yamanishi keeps things basic with the music, but it’s far from boring or repetitive. My only hairs to split are that 1) the dragon form looks a bit gaudy all solid-color with such bright hues 2) is he dead serious with his unitard or whatever? Unitard + knee-high “fuck me” boots + long-billed feathered cap?

What does that equal? It equals 6 out of 10, because while it’s not necessarily a classic, Dragon Fighter has a neat gimmick and plays like more than minimal effort went into it.

Just the intro animation sells this one. Shatterhand is the heartwarming story of a man who lost both his arms, only to rise above adversity… by pummeling adversity into rubble with his new robot arms. You can even punch bullets! There are also different kinds of little helper-robots you can get, presumably when the automatons get a look at your chromed-out “guns” and recognize you as a fellow Skynet agent. No, wrong story. This one is mostly about you and your little hovering robot helpers beating the shit out of some cyber-soldiers to save the world and get revenge on them for taking your normal human meat-arms… but maybe you should be thanking them! After all, could you punch bullets before? 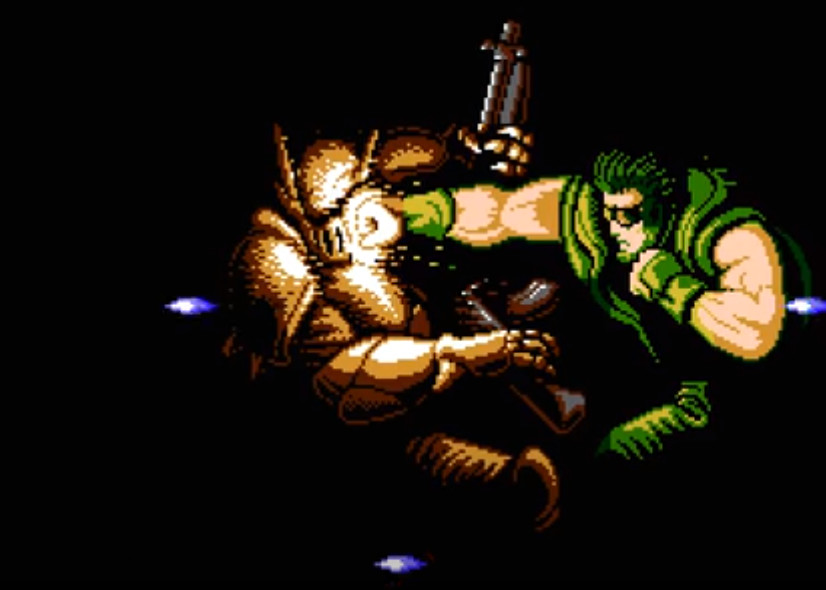 Let me answer that for you, nerd: no, you fucking couldn’t.

Shatterhand is a blast to play, but I could do without the elaborate pickup system. And don’t tell me I’m simple. I know I am. And that’s how you should keep your pickups in games like this. Don’t have me playing punch-Tetris on the fly trying to pick a Greek letter. It’s a cool way to have all the types of helper robots, but come on. You could have just had them, without all the fiddlin’ and diddlin’. Otherwise the game plays well and has a respectable challenge to it. The graphical style sits somewhere between the rich detail of a Sunsoft game and the effective simplicity of something like Contra. Composers Iku Mizutani and Hiroyuki Iwatsuki deliver a soundtrack every bit as hard-hitting as the game’s protagonist. 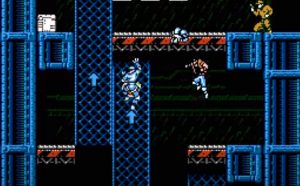 Shatterhand would be an 8 if not for the weird powerup system and the eventual repetitive nature of the gameplay. Instead it’s a solid 7 out of 10. I know a bunch of you think this game’s a total classic, and you’re not wrong, but maybe I give things lower ratings than they deserve because I suck at video games, okay? 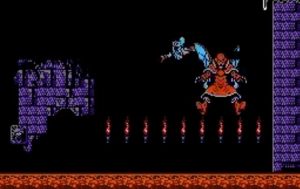 And so we go from arms to legs with Kick Master, one of the better-loved platformers of the late NES era, and for very good reason. Along with its fantasy theme, we see yet another decent melding of the action game essentials with some basic RPG elements (leveling up, etc.) as a continuation of a trend established in Legend of Zelda, Crystalis, etc. In Kick Master, your life has been royally fucked up by a powerful witch named Belzed, who has killed the king and queen and kidnapped the princess (natch). Your dumbass brother somehow gets killed by a skeleton (a circus-peanut-tier monster) even though your brother is wearing armor and wielding a sword when this happens. His dying words are so patently absurd that you are agape in shock: 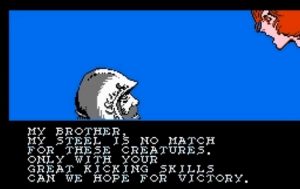 The thing is, you do kind of have “great kicking skills.” You’ve got magic, too… but the kicking. The kicking is what’s great. Stay focused on that.

The graphics for Kick Master are superb for their time, with early examples of parallax scrolling visible and some dynamic (if laughably poorly written) cut scenes. You fly around the screen in a well-animated fury, raining hell (and feet) down upon your foes across eight stages filled with lush backgrounds. For all your kickmastery and wizarding bullshit, the controls aren’t cumbersome, either. I wish I could praise the sound, but it’s not great. In fact, the boss at the end of the swamps makes a horrible noise that sounds like a high-gain modem dial-up sound being recorded through too mics that are way too close together. Yo, why did you choose to put that sound in any game? It made me think my ROM was fucking up… no, it’s just Kick Master.

7 out of 10 for Kick Master. Terrible sound, mitigated by a fun and innovative RPG hybrid play style.

This intellectual property, which followed among others in the wake of the Teenage Mutant Ninja Turtles, is actually criminally undervalued. I remember the cartoon (and its theme song) to be well-written as if someone still loved what they had created… or at least had money to spend on it for a while. 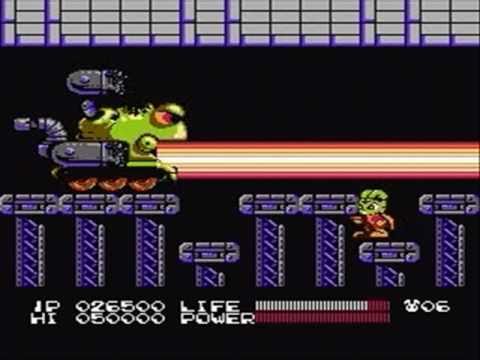 The NES game is no exception, positively gleaming with Konami quality throughout. With a splash of color true to the source material, the game spans four worlds rendered in vivid, exaggerated terms. Not only does Bucky O’Hare look like a Konami Game, it sounds like one too; Tomoko Sumiyama’s soundtrack milks every bit of that distinctive Konami soundset we all know and love, producing laudable results worthy of any flagship title. Gameplay is a masterpiece, though many find Bucky O’Hare to be a bit difficult (including little old me). Characters can be played as they are rescued, and there are reasons to play each one, not unlike how certain parts of the Mega Man games are best done in sequence…

A firm 8 out of 10 despite it being so fucking hard I can barely finish the first level.

Do you like Mega Man? Good, because you’re playing a reskinned Mega Man. Robots are still trying to take over the world, but these robots are from space and they’re vulnerable to magic, motherfucker. Krion Conquest is another one of those games that had a plot when it got on the airport in Japan but must have left it under the seat of the plane. The long and short of it: you’re a witch “from a place full of demons” and you’re the only one who can hurt all the robots. 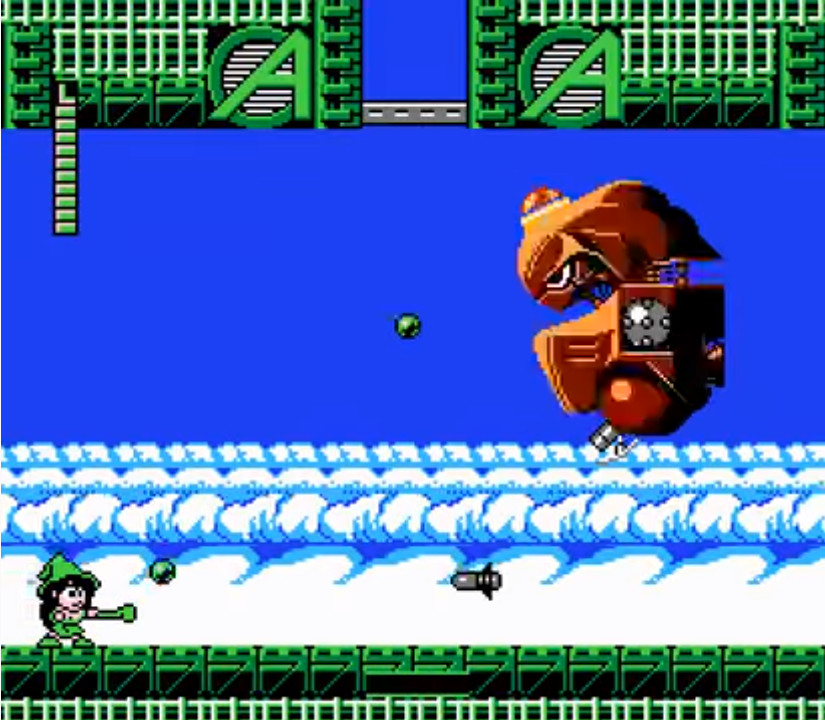 Leave it to a knockoff to improve on the formula of what it rips off. You can aim upward and crouch in this game, two things that Mega Man, a futuristic android hero, simply cannot manage to do. So as strange as this may sound, I find Krion Conquest slightly more playable than any of the first three Mega Man games, just due to the added versatility of being able to look upward and point my wand-thingy up there too. Seriously, of all the things a state-of-the-art futuristic cyber-champion CAN’T do, it’s crane his neck and lift an arm above his head? There are men in their nineties who have Mega Man outclassed. 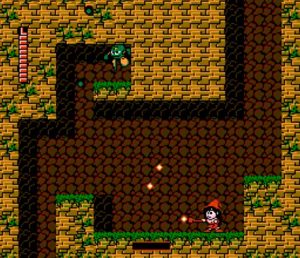 The graphics and sound are all over the place. Some of it is, well, just Mega Man sprites used as a tracing stencil. I won’t even itemize all of what’s ripped directly off; even the “GET READY” at each stage’s beginning and the life bar/weapons menu are barely given a new coat of paint. Most of the enemies look like if you paid the folks at LJN to redraw Mega Man baddies, but after buying those LJN folks a few shots of liquid hillbilly brain damage juice. The Krion Conquest has two composers, and two heads are… about the same as one in this case. Most of the music, regardless of its other points of quality, comes off as repetitive.

Krion Conquest can have 5 points out of 10 for at least cheating well. It’s a bag of blatant borrowing, but it’s at least playable. 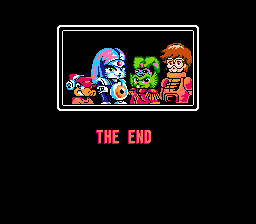 We’ll be seeing more of each other later in the merry month of May, RetroFans! Best Believe!