I told you people I'd do this again. I even begged you to keep me away from keyboards, word processors, and Google Images. I simply cannot be contained. I cannot be stopped. It's a compulsion beyond all reason, and I refuse to even entertain the

I told you people I’d do this again. I even begged you to keep me away from keyboards, word processors, and Google Images. I simply cannot be contained. I cannot be stopped. It’s a compulsion beyond all reason, and I refuse to even entertain the notion of restraining myself.

In other words, this is the eleventh article wherein I will examine and interpret the bizarre illustrations used to sell video games in the 80s and 90s. Both Metallica and Harry Nilsson have screamed for you to jump in the fire, and now I’m screaming too. 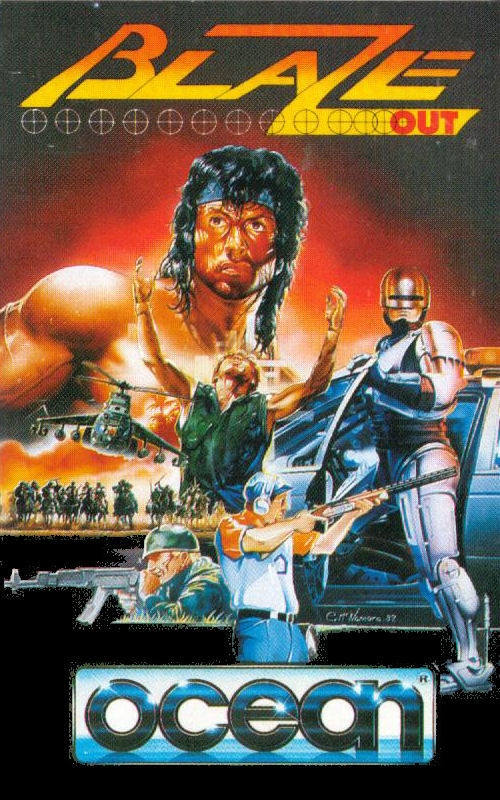 This is just egregious.

“You guys see that?” Rambo muttered bemusedly, staring into the distance. “Someone’s really about to buy this for their C64.”

Sgt. Elias was able to make eye contact for only a moment, clearly occupied with death throes that would never be explained beyond the narrative they’d been torn from in order to deposit his corpse here. The life faded from his eyes.

“THIS COURSE OF ACTION IS INADVISABLE,” said RoboCop, his voice’s metallic tone cutting clearly through the din of approaching horses. “THEY MUST BE UNDER THE MISTAKEN IMPRESSION THAT THIS IS SOMETHING OTHER THAN FRAGMENTED BULLSHIT THAT WILL TOTALLY DISAPPOINT THEM.”

Rambo sneered in numb disgust. “Get used to disappointment, RoboCop. Look where we are. Relegated to the bargain bin. Uncle Sam’s toy soldiers, forgotten and thrown away… at discount prices.”

Elias gurgled as he finally gave up the ghost. Strains of Barber’s “Adagio for Strings” mingled with notes of Goldsmith and Poledouris. The posse on horseback continued to clamor forward, never truly gaining ground. John Rambo was right. This would never resolve itself. It did not exist.

Solstice: Quest for the Staff of Demnos 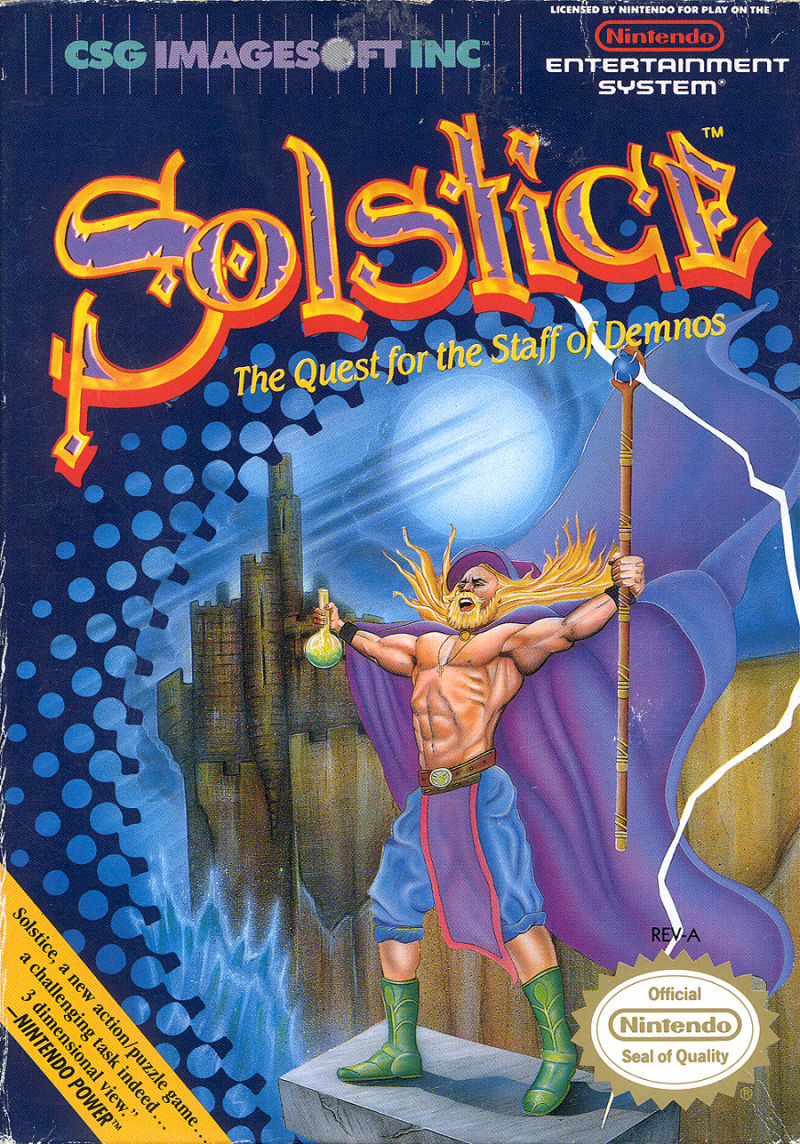 Here we have game art that ticks off two check boxes: First, unforgivable false hype (Solstice is a goddamn puzzle game). Second, art that is so representative of what its year of origin was about that it could be used as an example for academic purposes. This is so 1990 that I can smell the PVC and hairspray.

“BODY GLOVE SPONSORED ME! I EVEN BROUGHT MY BONG, SEE? COME ON, THE REST OF THIS SHIT IS DRY CLEAN ONLY! HOW DARE YOU CLAIM THAT I AM NOT TUBULAR ENOUGH TO ENTER THE FORTRESS OF GNARLINESS?” Neon Gandalf needs to chill out. All that Deca-Durabolin has really started to give him some un-radical roid rage, despite how ripped he is for a wizard. Imagine wearing a full purple cloak but not a shirt. He doesn’t have to imagine it. He’s living it, pal.

Neon Gandalf would actually be a pretty badass name for a stoner metal/80s New Wave revival mashup act that would doubtless fail to live up to my expectations. 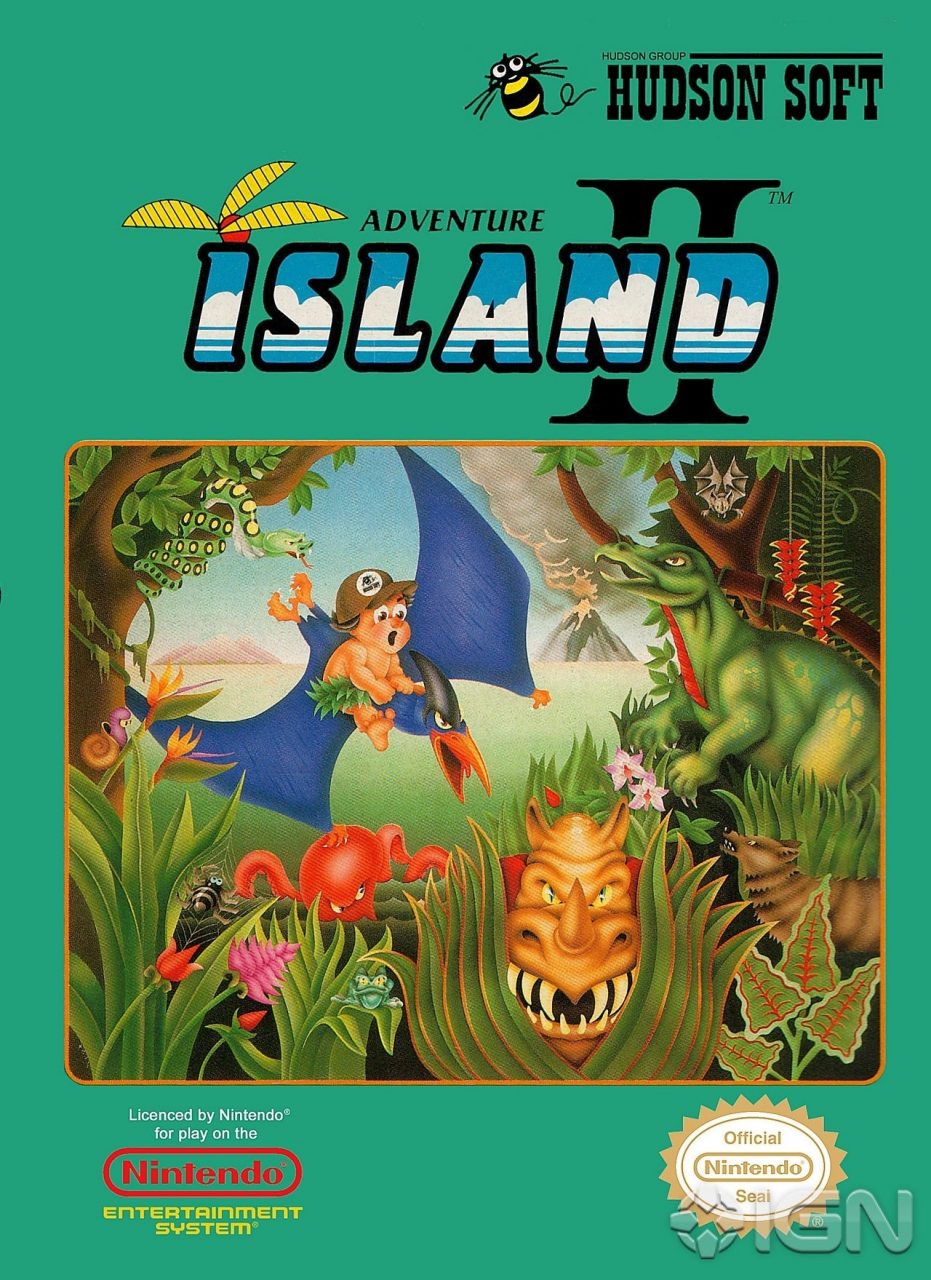 I picked this one based entirely on the premise that a rhinoceros has T-Rex teeth on it. Master Higgins looks so scared! He’s so fucked up over it that he can’t even stay in one lane on his pterodactyl. Which by the way, seems to be the only creature not busy leering hatefully at either Higgins or the person viewing the image. At least this is fairly accurate to the content; this series of games is pretty unforgiving (but fun).

There’s all that photoshopped art on the internet with horses that have carnivore teeth. Why not a rhino? And yeah, give him Satan eyes, too. I not only can live with that, I endorse it. 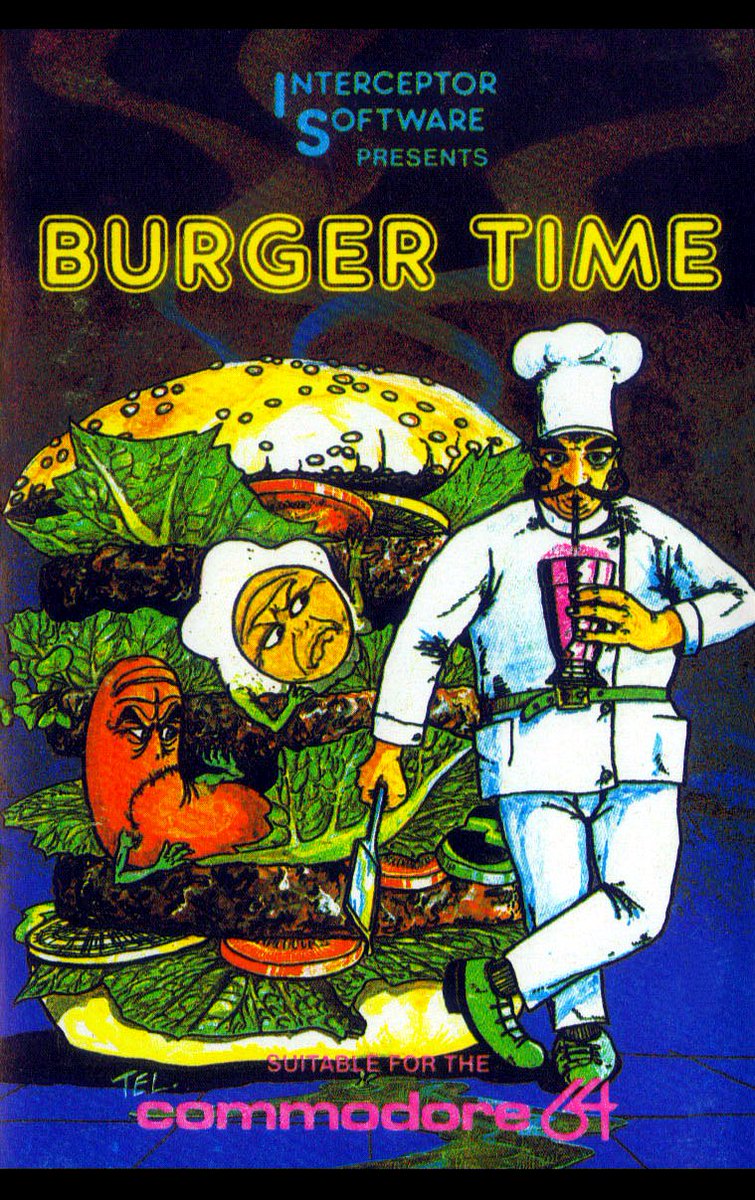 Peter Pepper doesn’t give a fuck anymore. He’s been doing this for so long now that he’s just on auto pilot. The milkshake is a new thing; he knows it pisses them off, and he’s glad. This isn’t what he wanted his life to be like. He imagined his life as a restaurateur would be a very different thing by now, and he’s deeply resentful of this situation – no, this nightmare, but he’s just so jaded now that he’s consuming his own inventory and daring fate to consume him in turn.

Maybe it already has. From the look in his eyes, BurgerTime has eaten him, and he knows it. He just doesn’t feel the teeth yet. Perhaps the worst part is that he never will.

Monster in my Pocket 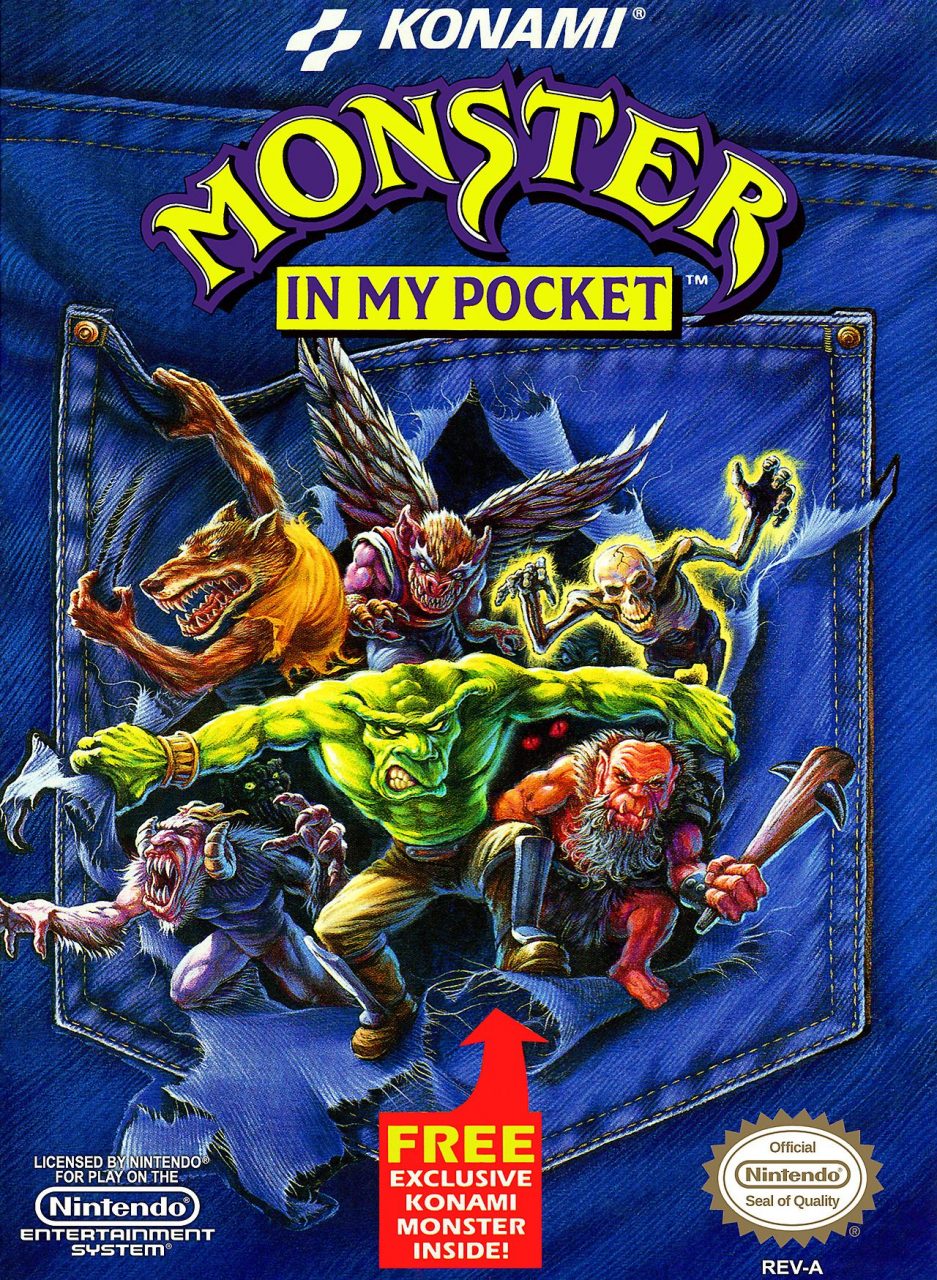 If you needed one more reason not to wear blue jeans, here it is. Not only is it a questionable fashion choice for most men and very prone to fading, denim comes with the inherent risk that tiny skeletons, goblins, and werewolves could erupt from your ass violently and without warning. They don’t even look happy to be free. Look at that goblin’s face. You think he likes being trapped in your ass? You think he’s into that?

I hope this latest misadventure into the box art vaults has left you more amused than injured… though I claim no liability for the latter, dear readers. Stay Retro!