I'm very sorry for the delay in new articles this month, folks. I found myself at a loss as to what I should crack into. I like to keep things as fresh as possible (when I'm not spending six articles mocking video game box art),

I’m very sorry for the delay in new articles this month, folks. I found myself at a loss as to what I should crack into. I like to keep things as fresh as possible (when I’m not spending six articles mocking video game box art), but sometimes after nearly 5 years of writing about the wonderful video games of the past, one has to dip back, at least partially.

I haven’t been talking as much about the 8-bit era lately, specifically the NES. How can we not keep coming back to the NES? To many (maybe even most) retro gamers, the NES is the iconic console of the 1980s, and it was certainly the beginning of a golden era for the hobby. It had a remarkably long run when measured in the span of time during which games were released for it; over 700 titles were produced, not counting unlicensed games, from ’85 to ’95. That’s a full-bodied decade-long reign.

Long Story short, we’re gonna go on a three-article grab-stravaganza. I’m going to talk about three games per article, all randomly picked from the NES library, and we’re gonna show the little grey box some love, like we should.

I played a couple of these Flintstones joints for the NES (yes, there are multiple), but this was probably the most decent one. In This one you play as Fred and Barney, between whom you can switch a la Castlevania 3, as they set out to find their dumbass caveman kids who wandered off. 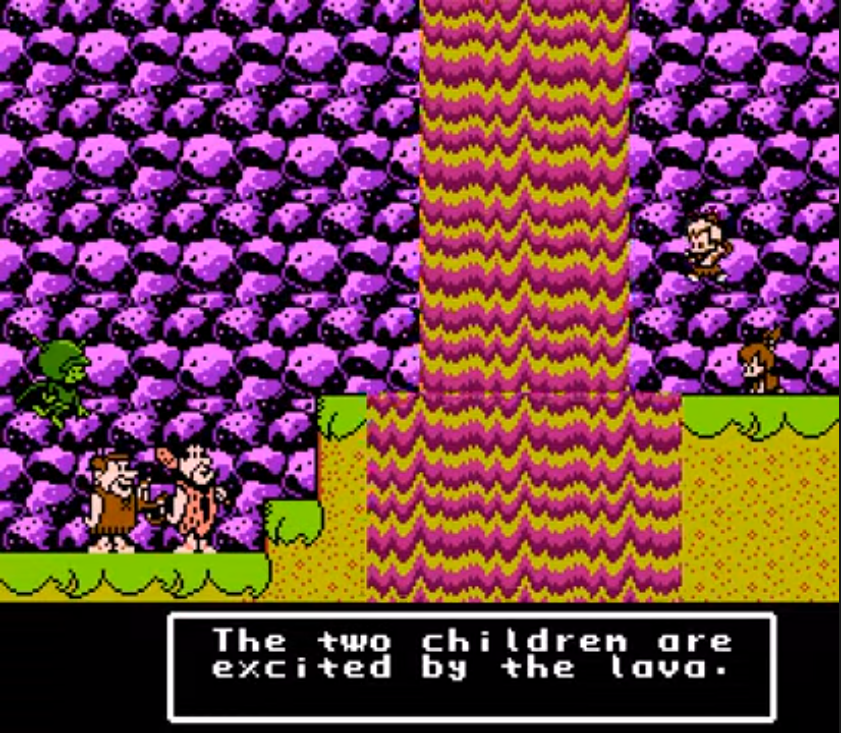 The severe drawback this game has is that it was made in ’93, yet its audiovisual presentation seems more like 1986 NES fare. Not that this is a huge problem, but come on, Taito, you’ve had time by now to figure shit out and you’ve also made some games that don’t look like shit. The color palette is criminally underutilized, even for a game based on a cartoon, and the sound is almost 2600 quality. What saves Dinosaur Peak is that it’s a great platformer from a play and design standpoint. The ledge-grabbing thing is something a lot of otherwise cool games could have benefit from, and there are actual pros and cons to both playable characters. Fred’s a basic bitch who just swings around a club, but he can hit really hard with it, and Barney’s got a weak little slingshot, but he can use it from a safer distance than Fred can swing. The cutscenes… well, I can see that they put effort into telling an actual story, but the cutscenes are kind of weird and boring. I can forgive this easily, because like I said, at least they’re playing at a storyline. They just could have not bothered, really. It’s the goddamn Flintstones.

I’ll drop Flintstones: Surprise at Dinosaur Peak a 6 out of 10, because it’s fun to play despite looking like a grade schooler drew it.

Y’all know how I feel about shmups. They are very much my shit. I sometimes load up an emulator to play a few when I can’t sleep, and the pure dopamine release lets me sleep after. Section-Z is a great example of an earlier member of the genre really going the extra mile. It also stands as a fantastic example of an arcade port losing none of its playability in translation, at least as far as I’m concerned. 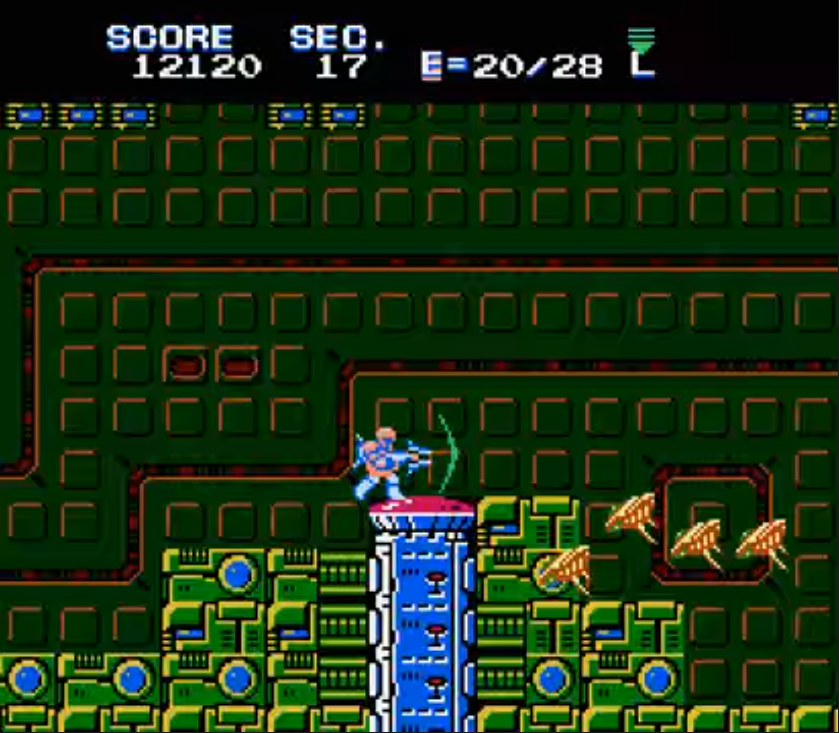 You play as an astronaut who’s out to destroy an alien base led by a creature called the Bangalool. Don’t look at me, I didn’t name the fucker. Beautifully, that’s really all the plot we need, because this game kicks ass for its time and the genre it most fits in. The best part of it for me is the way you move through the game. You do a lot of linear movement and standard dodge-and-shoot, sure, but you’ don’t just fly offscreen at the end of a section. You’ve got to move through a series of teleporters to get to the section boss. There’s also that great front-and-back action, combined with variably-paced speeds for different areas. The game also looks great, because Capcom knows what the hell they’re doing. We’re not looking at much more complex palette use than the Flintstones since it’s 1987, but there’s an appropriate amount of implied detail to the backgrounds and a great variety of baddies and bosses represented. The music’s pretty kickin’ too.

Section Z gets an 8 out of 10. I’d forgotten about this bad boy and was glad to rediscover it.

I’m not gonna beat around the bush: this game fucking rocks. I watched the opening cut scene and was blown away. Prime example of a game really milking everything it can out of the NES’s capabilities. You play as a warrior who’s on that stereotypical save-the-princess routine, except this time you really are a hardcore nonstop bam-bam baddie destroyer. 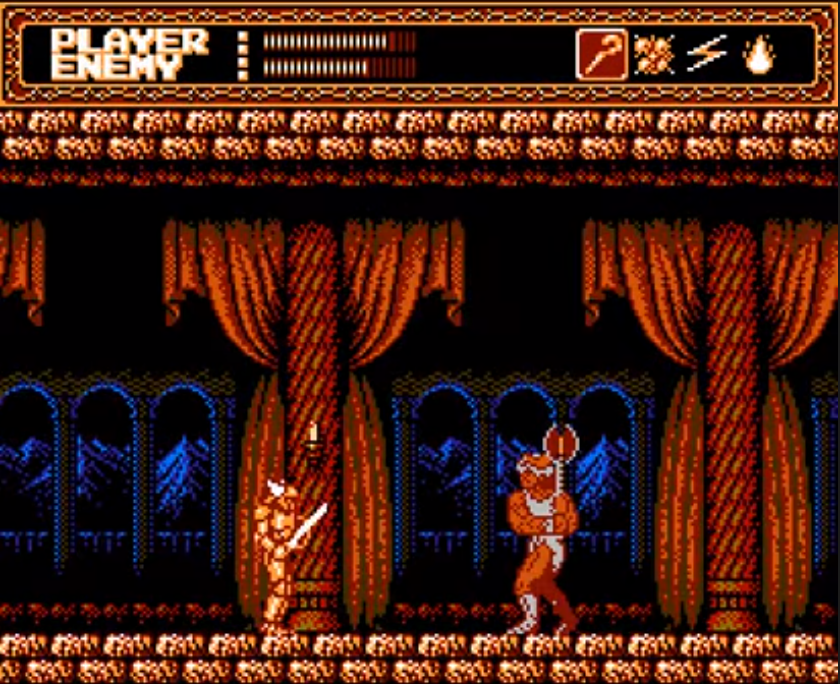 In true old-school fantasy fashion, you’re a skilled swordsman – one might even call you a master – pitted against all kinds of gargoyles and skeletons and shit, and some of the enemies even require you to stop your progress and carefully out-duel them to the death. Once you get used to how fucking sly some of these monsters can be, it’s a lot of fun to play. Sword Master has solid graphics, especially in the cut scenes, but also featuring parallaxing and fairly crisp, well-defined characters. This game’s music is even gnarlier than Section Z’s. It’s almost headbanging good.

Sword Master also gets 8 out of 10. It is old school heavy-metal fantasy goodness in distilled form.

I will see you in a few days for part 2 of this NEStravaganza (I actively cringed while typing that) when we knock out three more games! Stay Retro!