There’s a new sovereign in Thra and a new creative team at the helm of BOOM! Studio’s latest arc of Dark Crystal: Age of Resistance. The comic, in general, maintains the dizzying sense of wonder that fans of the Jim Henson film and some of 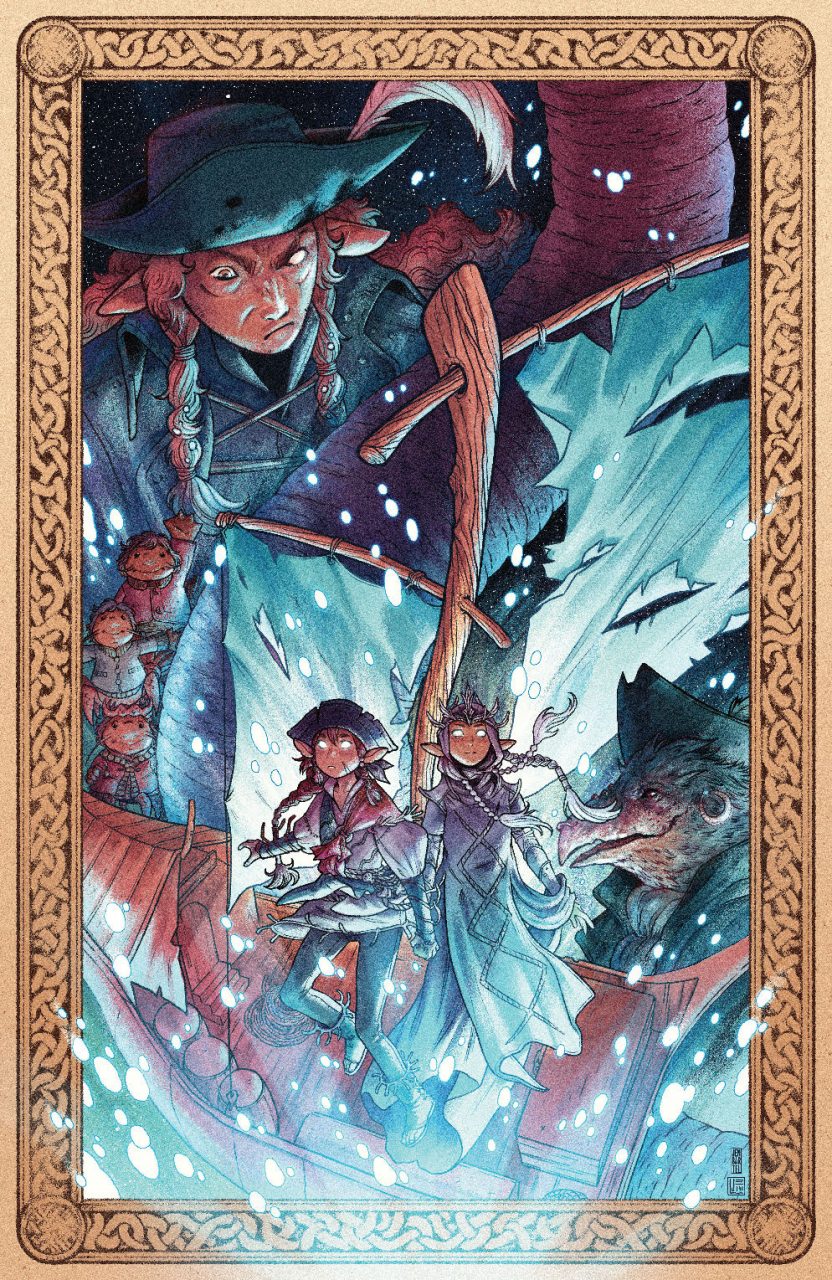 There’s a new sovereign in Thra and a new creative team at the helm of BOOM! Studio’s latest arc of Dark Crystal: Age of Resistance. The comic, in general, maintains the dizzying sense of wonder that fans of the Jim Henson film and some of the more exemplary licensed comics would come to expect, but pairs it with a wholly unique tone and fantastic artistic depiction. There’s a lot to like here, and while it holds on to some vestigial issues that I would argue have plagued all Dark Crystal media, including the original movie, it still cruises along at a brisk pace and never feels decompressed. In short, this is a comic that feels as though it has intention. With a story by Jeffrey Addiss and Will Matthews, a script from Matthew Erman, art by Jo Migyeong, colors from Fabiana Mascolo, and letters by Jim Campbell, Dark Crystal: Age of Resistance is a fun and engaging fantasy adventure comic.

For as much as I bemoan Big Two comics for their wiki-over-purpose storytelling, it would be perhaps too generous to say that the Dark Crystal as a franchise is the most welcoming to new readers. Sure, you might remember broad strokes from the source material, but how much of that sweet, sweet lore do you have at the front of your mind? Henson’s worlds are so enormously inventive and lived-in that this lore is a bit of an albatross around the neck of comic continuations like this or the Labyrinth comics. There are exceptions: the Smith / Huntington run on Beneath the Dark Crystal laid out everything you needed to follow along early and was propelled with such an emotional depth to the character work that I’d recommend that book to any fantasy fans. But more often than not, they end up like the enjoyable but sometimes difficult to immediately pick-up prior two Dark Crystal: Age of Resistance arcs, even though the teams of Andelfinger / Balsa and Cesare / Carlomagno made very enjoyable books in the process.

It’s refreshing, then, that Dark Crystal: Age of Resistance #9 feels more first-time-reader friendly, and more akin to the Smith / Huntington book than either of the latter. There’s certainly a substantial bit of lore at play, but this feels less like an anchor and more like traditional fantasy story worldbuilding. The book focuses on Mayrin, the recently ascended All-Maudra (think Queen / Empress). The prior sovereign, her mother, seems to have been respected even if we are given hints that she may not have been the kindest ruler. Mayrin finds herself overwhelmed by both the expectations she still feels beating down on her from her late mother and by the competing interests she must now juggle as a Muppet-adjacent head of state. One of the more pressing issues is that a seafaring gefling Sifan clan has been openly antagonistic to the new leadership. To win favor with this clan, Mayrin embarks on a voyage with Sifan Captain Kam’Lu. The leader of the Sifan’s, Fenth, in the meantime is making a potentially nefarious deal with the Skeksis. A large ocean monster attacks the ship and Mayrin saves Kam’Lu as the latter’s ship sinks below the depths. 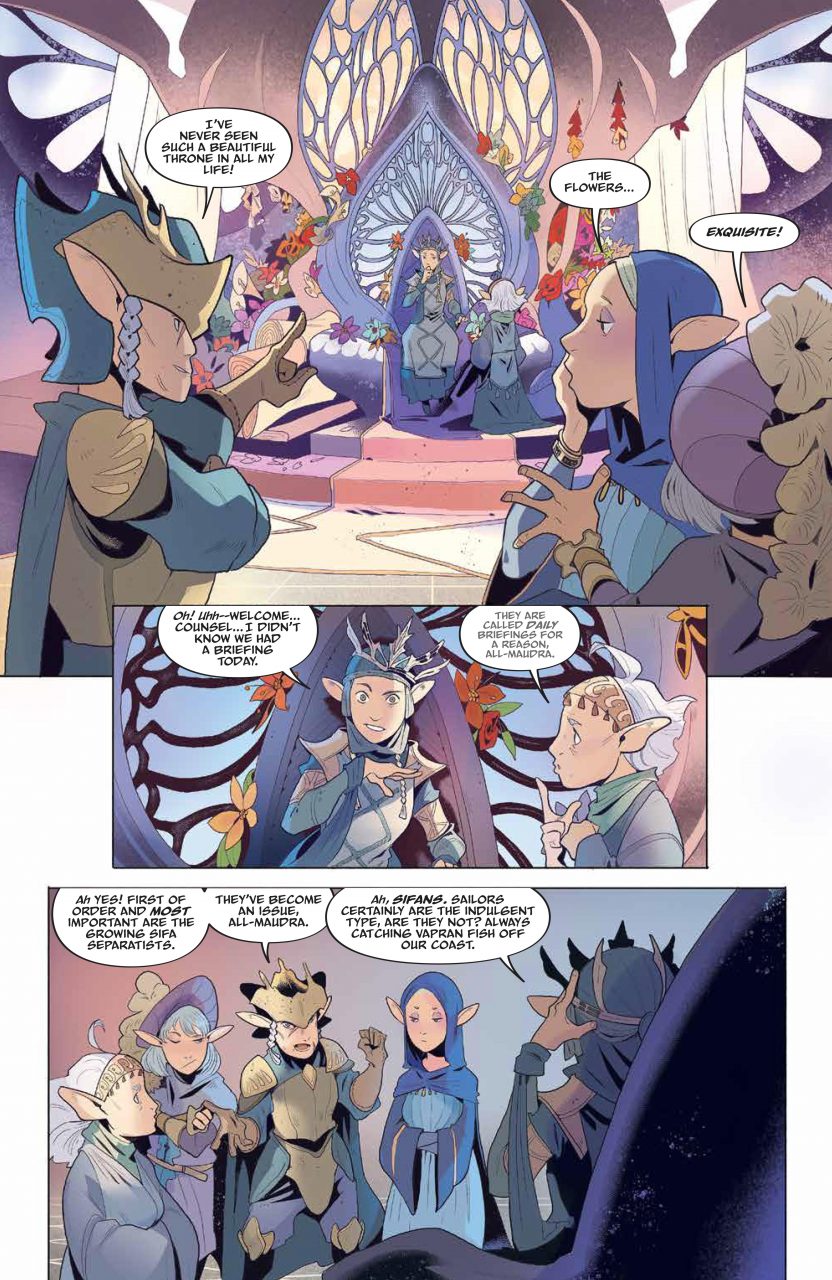 What’s particularly unique is that all of that plot summary really obfuscates just how whimsical the book feels at times. A lot of that is due to Erman’s grasp on character-centric writing, a consistent strength in his work. It’s tough to write characters so clearly earmarked to arc in terms of maturity and not make them insufferable. Mayrin’s character is a make-it-or-break-it element of Dark Crystal: Age of Resistance #9. In a lot of ways, she is bratty at the comic’s onset, but the book makes it clear that while her outbursts might be self-centered, she isn’t selfish. While this story doesn’t at this point seem too concerned with interrogating the monarchy of Thra on a conceptual level in any noticeable extent, the amount of sympathy it generates for its protagonist, and interest it builds in learning more about what will likely be its secondary protagonist, is impressive. It will be interesting after the remaining three issues of this arc come out just how much of a connection you can draw between Erman and Migyeong’s creative input on a long running much-beloved franchise and Mayrin’s own feelings towards her inherited throne.

On the subject of Jo Migyeong, I would be remiss if I didn’t mention how good this comic looks. While Migyeong’s scenes of crowds often feel spacious to a fault, the facial work on the closeups and the action shots give this comic a sense of emotion and urgency. A large amount of the sense of wonder in this book comes with Fabiana Mascolo’s work. There’s a use of blues and purples that, while aiding in the mysterious quality of the night time scenes, makes the daylight scenes seem alien, which is fitting given just how weird the Dark Crystal world really is. Readers are only offered a brief glimpse of a skeksis, but it’s enough to be excited to see them interact with this story.

It’s hard to recommend this to someone with zero familiarity with the source material, but if you enjoyed the movie, Dark Crystal: Age of Resistance #9 is worth your time. Without relying too heavily on prior arcs or even the Netflix series, the issue is way more new-reader friendly than it has any right to be. It’s a visual treat with a non-stop focus on characterization in its storytelling.