Ain’t Love Grand? Or at least it could be for Jesse Moore, the architect engaged to heiress Emily Anderson, the main protagonist of Going to the Chapel. The comic, written by Spencer & Locke writer David Pepose, drawn by Gavin Guidry, and colored by Liz Kramer

Or at least it could be for Jesse Moore, the architect engaged to heiress Emily Anderson, the main protagonist of Going to the Chapel. The comic, written by Spencer & Locke writer David Pepose, drawn by Gavin Guidry, and colored by Liz Kramer blends heist tropes with a cold-footed wedding to create something that feels fresh from the first couple pages.

Going to the Chapel is more grounded than Pepose’s prior work Spencer & Locke 1 & 2, of which the second collection is now available for purchase. It would be easy to call this lighter than that book, but that isn’t entirely fair. Sure, there’s no explicit history child abuse or police violence (yet), but the threat and fear for both the wedding guests from the robbers is palpable. That isn’t even mentioning the fear the robbers have from authorities. This is a comic that wastes no time in establishing its characters and its stakes. While Pepose’s writing is characteristically strong at immediately grounding Emily and her fiance Jesse as relatable and distinct characters, Gavin Guidry’s art marries story to visuals.

Emily is introduced completely alone,and while that framing emphasizes her feelings of not wanting to get married, the facial depiction shows her as earnest and sincere in her emotions. Jesse, by contrast, is also introduced alone,  but his panel is filled with other characters. He isn’t as lonely, and this is reflected in the character work by him being less apprehensive about his upcoming wedding. His face is telling as well. Unlike the more upfront reading of Emily’s anxiety, Jesse has a smile that looks more like an affect. While the full extent of his dynamic with Emily isn’t revealed in Going to the Chapel #1, it wouldn’t surprise me if things are not always copacetic.

After all, who goes to a bar an hour before their wedding? 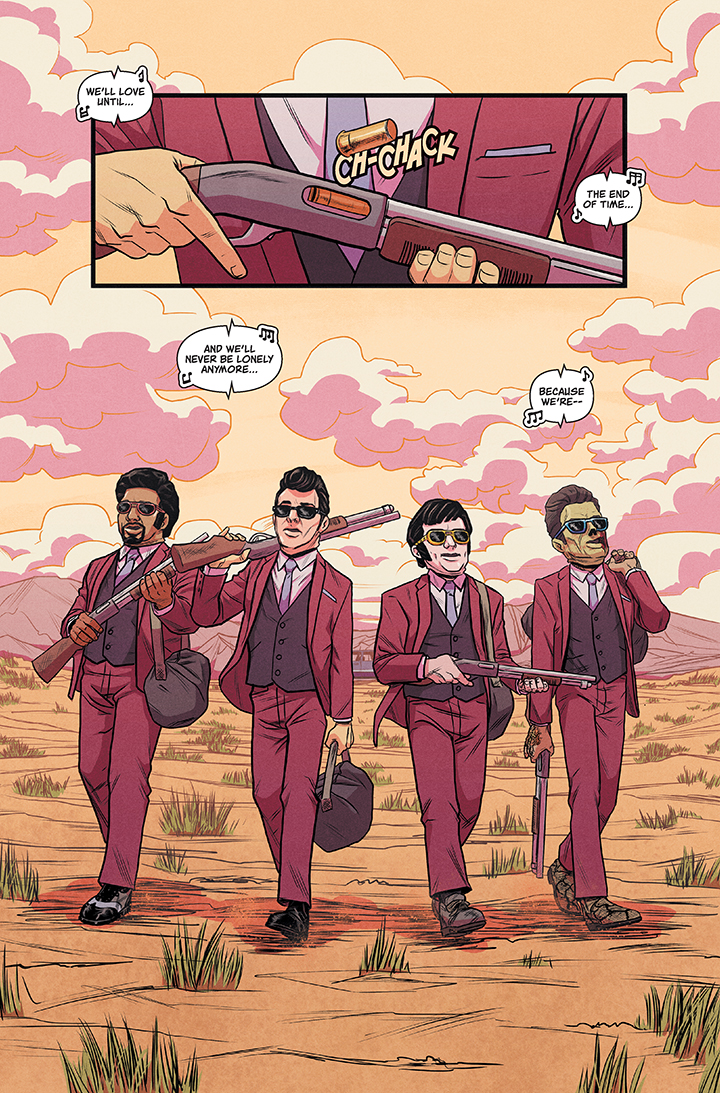 Readers jump from Emily and her dysfunctional family at the chapel and Jesse drinking with his groom party at a local bar. Jesse meets a friendly stranger named Tom and the two share drinks. When the comic catches up with its in medias res opening, the Bad Elvis Gang, some robbers in Elvis masks, interrupts the pending nuptials. The leader of the gang takes Emily to a secluded room to steal her priceless necklace. There it is revealed that he is Tom, the stranger that Jesse met at the bar. And not just that, but that he and Emily used to be together.

It would have been too easy to make this black and white. A lesser comic would make Jesse a jerk and Tom a completely charming rogue. Pepose does such a good job in endearing readers to his characters, that we don’t see anything particularly wrong with Jesse, and Tom hitting him with the butt of his gun further engages the reader’s sympathy while clueing us to the idea that, despite the generally lighthearted tone of the comic, Tom is a dangerous individual. If wedding nerves are often the result of reality in conflict with an ideal, it’s interesting to see this mirrored in a microcosm when Tom hijacks the wedding.

As mentioned, the art is terrific throughout. While Guidry is clearly skilled at conveying emotion through character facials and body language, there’s also an incredible flow throughout the panels. Readers are never stuck with a particular angle or perspective for too long, but never whipped around to the extent that anything feels jarring. The panel compositions are solid. Colorist Liz Kramer likewise strikes a balance between variations for interest and consistency for identity. The entire comic has a real preference towards purples, browns, and blues, and those colors look fantastic whenever they appear on-panel.

Going to the Chapel #1 is strong debut issue of a series that will immediately endear readers to it. This comic is full of characters that live and breathe in a way that most comics wish they would, and its balance of characters you want to follow and a plot that zips around at an exciting pace makes it a hard one to pass up.