“We’re all wounded here.” Spencer & Locke established itself as a series that has a definite understanding of emotional storytelling early on, with the characterization being front and heartbreaking center in the middle of the comic’s first run. That first arc showed how trauma informed Locke. 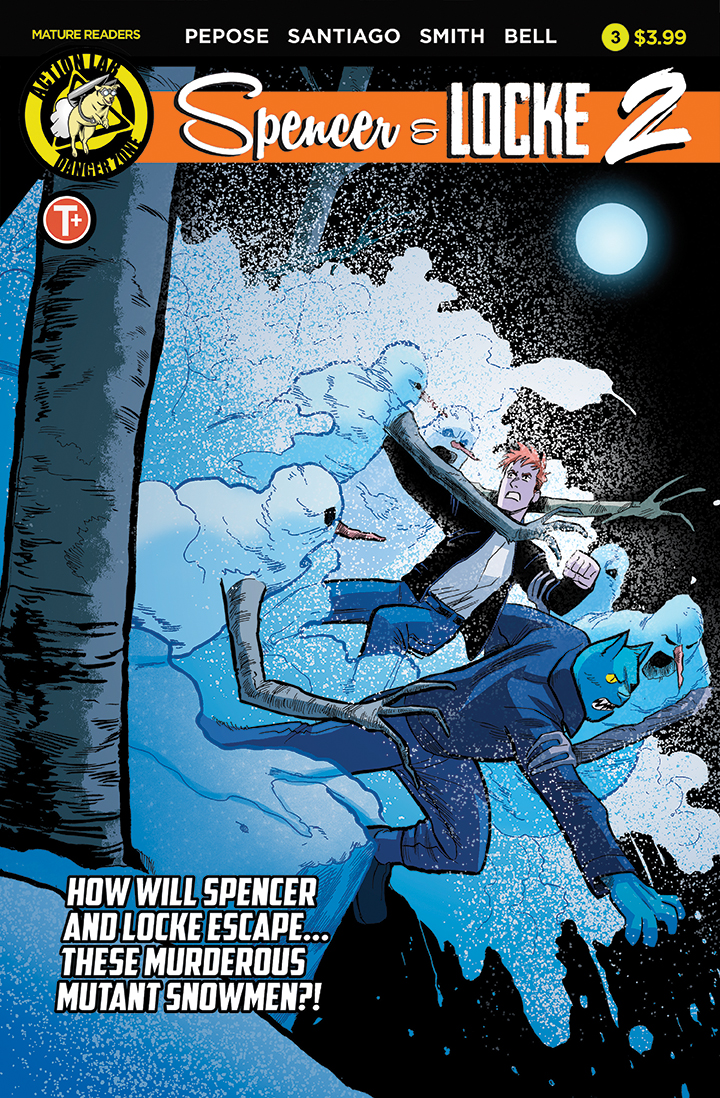 Spencer & Locke established itself as a series that has a definite understanding of emotional storytelling early on, with the characterization being front and heartbreaking center in the middle of the comic’s first run. That first arc showed how trauma informed Locke. The second arc seems more interested in how trauma informs this world, and all of this against the kernel of an idea planted in the first arc that is blossoming in the past 3 issues: how we use narrative to navigate trauma. But all of this is concerned with writer David Pepose’s storytelling flexing. Spencer & Locke #3 is also a showcase for artist Jorge Santiago Jr., colorist Jasen Smith, and letterer Colin Bell.

The titular characters spend the majority of the issue in a fantasy where he’s fighting hordes of his painful past in the form of Mutant Nazi Snowmen — as one does. The menacing and unique art style of Santiago Jr. makes the imaginary threat feel both scary in a visceral sense, but also appropriately heavy given that they represent the very real childhood abuse Locke suffered. The combination of this with the stylized and unstable panel layouts and use of unfilled space makes these imagined sequences have the weight of the real world.

Smith’s colors here are at their peak, staying largely in a blue-tinted palette that plays expertly with shadows to give the comic a palpable sense of mood. When this coloring gets disrupted, such as the hard red backgrounds of the snowmen getting shot, it adds to the effect of the original colors. Throughout the comic, Bell’s lettering juggles between so many styles effortlessly, always adding to the scene (and character) it is part of. 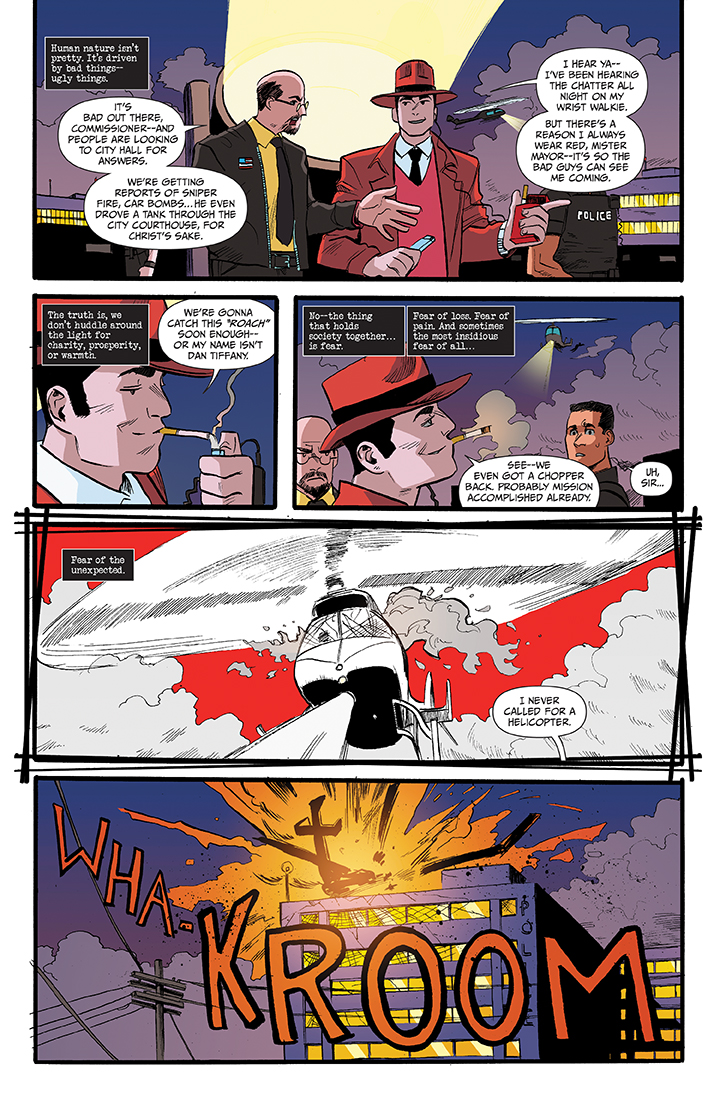 The real world stories of Spencer & Locke 2 follow two pursuers. First, Melinda Mercury is pursuing the lead of Roach Riley’s true identity, a quest that leads her to Fairfield Military Cemetery. It all comes to a head when it is revealed that Lana Forrester is Roach’s brother, and that her husband Hal is actually the mastermind giving Roach his “missions”. It’s a good thread with a solid payoff, with Mercury’s investigation and the reveal that a member of high society is pulling all the strings being a straightforward and strongly executed noir.

The other pursuit is Locke’s daughter Hero pursuing Roach Riley as he plants bombs beneath the city. She makes a cape and mask out of a hoodie and calls herself Captain Astounding. She manages to disable one of Roach’s bombs by triggering the child lock on it — its a cute merging of the high stakes of the plot with the childlike worldview of the character involved. Another bomb goes off, however, and Roach gives Captain Astounding his respect before telling her to avoid hospitals in the near future. 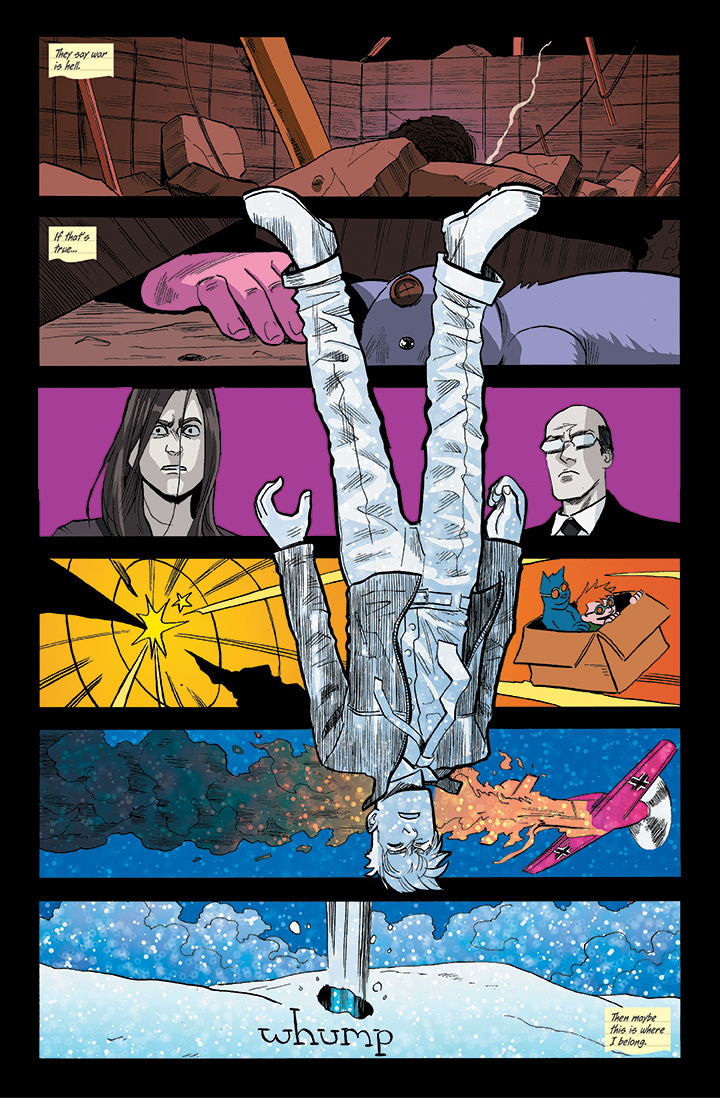 Locke, Hero, and Roach are all propelled by their pasts. It isn’t clear where the series will end, but with Hero echoing her father’s sentiment that she be better than him. Locke has done good in the world, but has been consistently portrayed as fundamentally broken in a way that’s mirrored by Roach Riley. It isn’t just the references to Sunday Comicstrips that connect the two. Their past suffering defines them so much that it’s hard to imagine something hopeful in their futures.

Hero is different. There is trauma in Hero’s past, but the comic posits her as hopeful, even in her harnessing of hardship. It would be easy to say that this is just a result of her being a child, but we glimpse a childhood Locke wielding a pistol in a couple of genuinely unsettling panels. This series will end with Hero having an optimistic future. It just needs to.

Just like the first arc, Spencer & Locke 2 is hitting that sweet spot where all of its disparate pieces are coming together in such a way that the depth of storytelling and the consistently impressive visuals that this is a comic you need on your pull list. It will easily reign as one of the most memorable when the year ends.