You really can't go wrong with some Super Mario action. It's been clear-as-a-bell true since the poor bastard first dug in his heels and made a giant ape his hammer-bitch. The plucky plumber and his perpetually overshadowed brother Luigi have since stood as the mascots 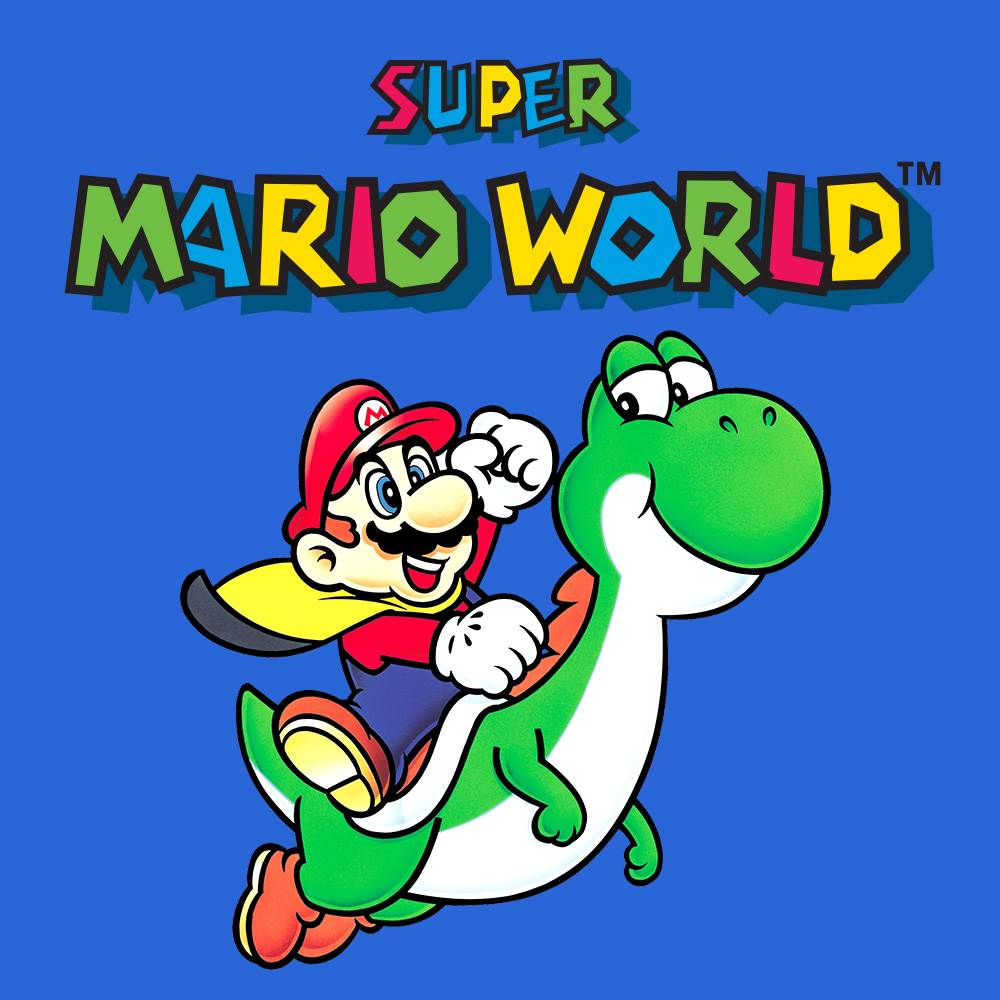 You really can’t go wrong with some Super Mario action. It’s been clear-as-a-bell true since the poor bastard first dug in his heels and made a giant ape his hammer-bitch. The plucky plumber and his perpetually overshadowed brother Luigi have since stood as the mascots – no, the AMBASSADORS – for Nintendo across the world. When the NES hit our shores in ’85 and we first took a crack at the original Super Mario Brothers, it’s been simpatico.

I can still remember getting my grey box for Christmas in 1990. My supplemental was a starter set of three games: Castlevania III, Contra, and that glorious smiling flying asshole on the cover of Super Mario Brothers 3. I was quickly convinced that SMB3 was the hard-wire shit, and it was.

But I had no idea what was coming. The NES had a big brother, and it had one barn-burner of a Mario game. To quote the late, great Captain Lou Albano: Often imitated, but never duplicated.

Super Mario World hit Western shores (no doubt blasting “Immigrant Song” on a boombox) in the late summer of ’91. I don’t need to sit here and run my trap about this being one of the best games of all time; 20,000,000+ copies sold can’t be wrong. When viewed within its place in time, SMW understandably changed everything, because it was Mario squared. In typical Nintendo R&D fashion, work began as soon as a previous project ended. Shigeru Miyamoto (the man we have to thank for all of this) had come up with the idea of setting a Mario game in a “dinosaur land” back during SMB3’s run, and had even conceptualized Yoshi by then. Though some difficulty was anticipated when it came to tackling a new platform, the team’s trepidation was balanced by the promise of far greater capability – the limits of the NES were a thing of the past, and it was time to make some art. 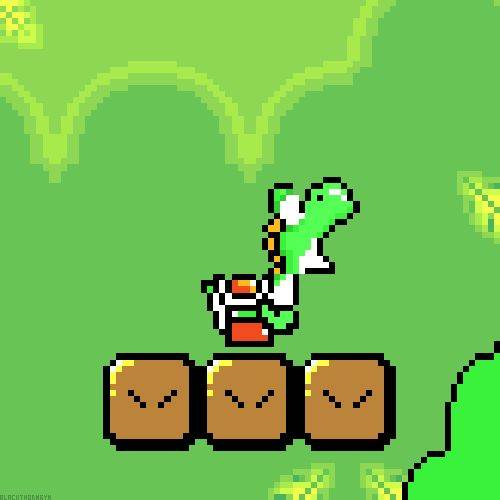 The story of SMW picks up right where the 3rd NES game left off… or I suppose a little bit afterward. The brothers decide to treat Princess Toadstool to a nice vacation in… you guessed it… fucking Dinosaur Land. Why no, Mario, I don’t expect anything horrible or tragic to happen. Not here on this landmass full of monsters. Needless to say, Her Highness vanishes, and it turns out that 12 pack will have to wait. The boys have a princess to rescue… again. After looking around a little bit, Mario and Luigi find a huge fuckoff dinosaur egg, but thankfully its tenant is friendly. Out pops a goofy, soft-serve little dinosaur named Yoshi, and the first thing he does is complain that some of his kin have also been taken. AND GUESS WHO DID IT? 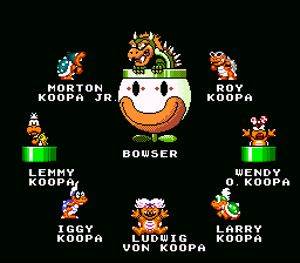 Turns out, not a single goddamn one of them learned their lesson.

While the basic concept of SMW is a snug fit with its predecessor,s there’s so much more going on that the comparison must end there. Koopas and Goombas make up a thin sliver of the pie chart when it comes to enemies; you’ll be harangued by dinosaurs, the coolest moles ever, Bullet Bills the size of a goddamn house, lava monsters (my favorite), and huge terrible assholes in ill-fitting football pads. THOSE GUYS. In a shining early example of clever AI and design, Chargin’ Chuck is… well, he’s inventive when it comes to assaulting you at every turn. Mario can spin jump in addition to his normal move set, which is helpful when you need to, oh say, bounce off giant saw blades or body-drill your way through some blocks. Sometimes Yoshi (or one of his color-themed cousins) will show up to give you a hand. Yoshi is pretty useful for two things: eating shit that’s about two hand spans in front of him and taking the fall like a dope when you need some extra air time on a jump. A lot of the same power ups are around, but this time instead of a raccoon suit or any of that shit you just get the sickest cape this side of James Brown’s id. Not only can you get it to behave similarly to the raccoon leaf in SMB3, you can even parachute-glide insane distances with it. Mario and Luigi Die Hard their way through forests, seas, caves, ghost houses (yes, entire houses full of ghosts) and castles to put the hot stop on all of King Koopa’s brats… all the time knowing that Big K is waiting. 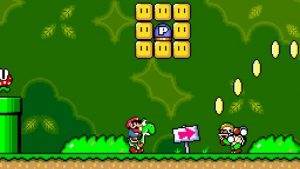 He never gives up! There’s two kinds of people who live that way: born winners, and the profoundly learning-impaired. Chuck, you ain’t winnin’ shit. 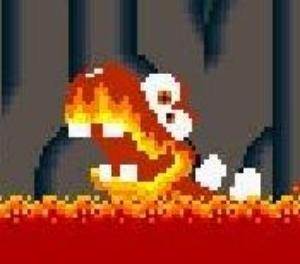 Just seeing this guy makes my soul light up. Blargh loves his job.

SMW has a save function, which is entirely necessary because this game isn’t just some mindless platform jumper. There are some steep challenges, including but not limited to:

Obviously the graphics kick the shit out of anything on the NES, with a comparatively rich color depth and other luscious details like parallaxing skies and pleasingly detailed animation. The sound stays neck in neck with the visuals; SMW’s soundtrack is one of those OSTs that I can listen to the “extended” versions of on YouTube and never get tired of. There’s a ton of character in the music, most notably (to me) the underground BGM and the “athletic” music.

Two other aspects of SMW that it should be praised for are its replay value and its overall charm. 8-bit graphics only showed us in so much detail; it turns out that those Italian boys have a lot of character, and so do their friends and foes. The appeal was (and is) universal.

I rate Super Mario World an 8/10. It’s one of the cornerstones of retro gaming, a pivotal point of acceleration for one of the world’s most recognizable and well-loved cultural icons. 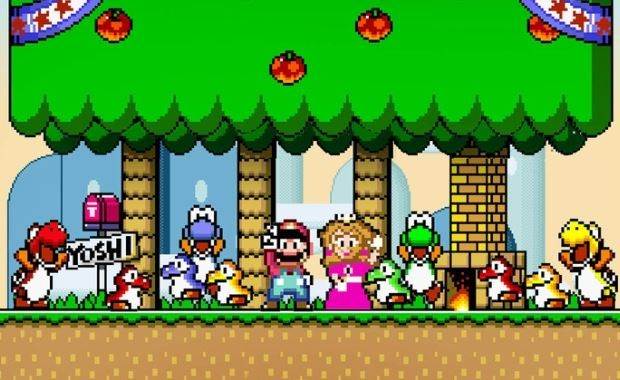 Thanks for reading! Stay Retro!