I have returned to you swiftly with three more arbitrarily chosen titles for the Sega Mega Drive, also known as The Genesis. Having already extolled the virtues of the console itself in part one of this series, I will spare you the repetition. The Genesis 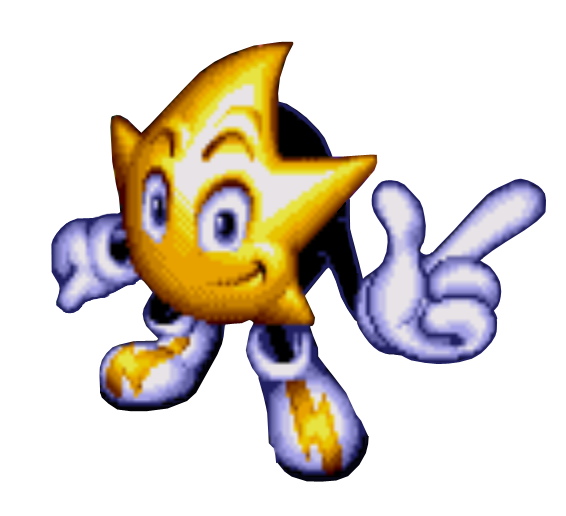 I have returned to you swiftly with three more arbitrarily chosen titles for the Sega Mega Drive, also known as The Genesis. Having already extolled the virtues of the console itself in part one of this series, I will spare you the repetition. The Genesis was my formative console experience, and I could rant about it for hours. I probably already have, if you add up all my references to it in my body of work for NRW. Like any video game console (or any video game topic, really), there are people who would wait in line to take a dump on it, but the Sega Mega Drive was a formidable powerhouse that still has loyal fans to this day. I’m one of them. Without further ado, let’s take a look at three more games.

This is one of the finest run-and-gun games I have ever played. The smug part of me (a big part) would like to just leave it at that, but I don’t get paid to write one-sentence paragraphs, nor would that really do Gunstar Heroes any justice. Gunstar Heroes is like Contra cubed. Contra multiplied by an exponent of itself. Your mission is, in summary, to break a spell used by a tyrant to take hold of the entire world by collecting some gems. Sega seems to like gems for some reason. We won’t get into it. There’s no need. If you are even passingly familiar with their other franchises, you know what I mean. To achieve your goal, you (and optionally, a second player) must tackle the tyrant’s massive army, which includes some really heavy hitters and weird stuff. 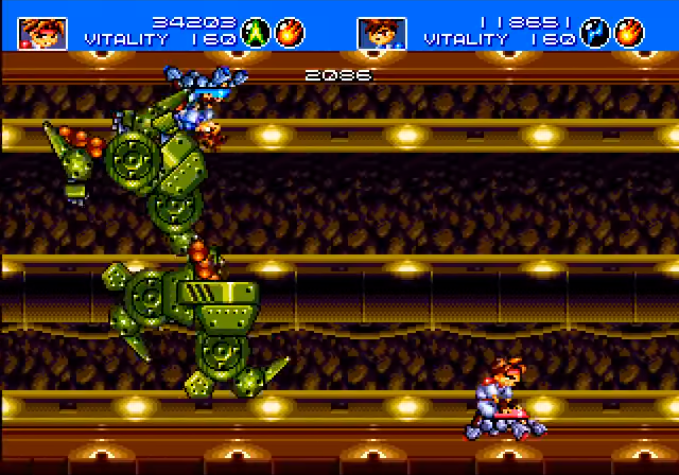 Sega cooked this game up, and from top to bottom, it shows. You not only shoot and run, but you’ve got jump kicks and other tricks, not to mention two-person moves and a variety of gun power-ups. You’re sliding down inclines, riding hover bikes, all kinds of great action-oriented shit is going on. It’s legitimately engaging and exciting. Over-the-top boss fights and a great cartoonish theme make this a ton of fun, and 2-player mode is bonkers. It’s always good to see decent co-op two player games from this era, because so many were “take turns” or just boring in general.

The graphics are pretty sick, with plenty of color and character. The bosses really stand out; many of them are made of separate sprites moving as one (or so it seems, I don’t know exactly how they did that, I’m just a fan, not a programmer). The music and sound are what you’d expect from Sega during this period, rich and well-written to fit the bombastic action theme. I’d like to stress again: this game is hella fun with two players.

Gunstar Heroes gets an 8 out of 10 from me. Solid game, and another one I liked even more when re-encountering it as an adult fan.

Some people love this game, and a few people hate it. I’m in the first camp, for sure. I’m a sucker for pinball in any form, be it real or virtual, and despite… well, everything about Sonic in the current era, I’m also a big fan of the franchise. This game holds a special spot in my heart much like Mr. Driller or the original DOOM; I have fond memories of playing Spinball during lousy parts of my life and it really allowing me to detach myself and relax.

There’s not much to discuss in the way of a plot. Robotnik’s being a dick again, Sonic has to step up and teach his ass a lesson, but this time it’s framed as a pinball experience. There are little parts where you’re not behaving like a blue spinning version of the silver ball, but for the most part, what you see is what you get.

The tables are challenging and contain some novel Sonic-flavored elements to them, including the theme-appropriate collection of rings and the end goal of collecting those damn Chaos Emeralds. (More gems. See?) Even cooler is the fact that each table is actually multiple tables, and you’ve got to navigate a very broad space to get things done and progress. Sometimes you’re even running and jumping around like Sonic normally does. There are even boss fights, since Robotnik seemingly loves to get his shit pushed in repeatedly by a little blue hedgehog. Sonic Spinball is a great time-killer without being boring or overly repetitive. The game also keeps score like a normal pinball game would, and is otherwise focused on that format. I could play most pinball tables for hours if life permitted me to fuck around that much, and this one’s no exception. 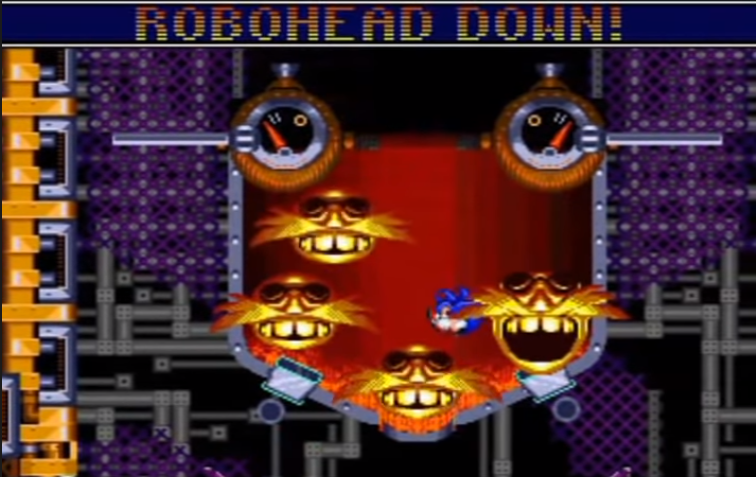 Jesus, Robotnik. One of your face is enough.

The music, again, is solid and on par with what Sega was capable of during the Genesis era. The Toxic Caves theme really stands out, not only as the first level music but as a good upbeat funk-type piece that seems right at home in a 1990s Sonic game. Spinball ups the ante graphics-wise, as well. There’s a lot of animation and activity, and Robotnik’s boss appearances are particularly well-detailed.

“This is one of those cutesy games,” I muttered to myself while loading the rom up in Fusion. I was absolutely right, and further expected to be let down by it, but it’s actually not terrible. Sure, it’s another platformer, and a lot of it is nauseatingly adorable, but it’s a ton of fun to play and it’s well-produced. (It just occurred to me that all three of today’s games are produced by Sega.) You assume the role of a little star dude in a distant galaxy, who (in a recurring theme not only in Genesis games but video games as a whole) is fighting against tyranny, this time in the form of a big nasty named Kaiser Greedy. Greedy is a “space Pirate” intent on ruling the planet Flora (Neer in the JP version) and the surrounding star system by force. This is another one of those games where they did way too much fiddling with the story from JP to NA release, so I’m not going to write a Cutting Room Floor style essay about it. Suffice it to say, it’s up to Ristar, with his gigantic stupid face and childlike digitized voice, to save the Valdi System from the beefy baddies.

It’s a platform game, and a late entry into the category during the era in question, but Ristar can do some cool stuff with his stretchy arms, like propel himself like a catapult or deliver vicious grabbing headbutts to enemies. A lot of play is based around the use of Ristar’s stretchy arms, but there’s plenty of conventional platform elements too: the run and jump stuff, underwater levels, bonus stages, and some pretty cool boss fights (including wizards and shit, which I’m always down for). 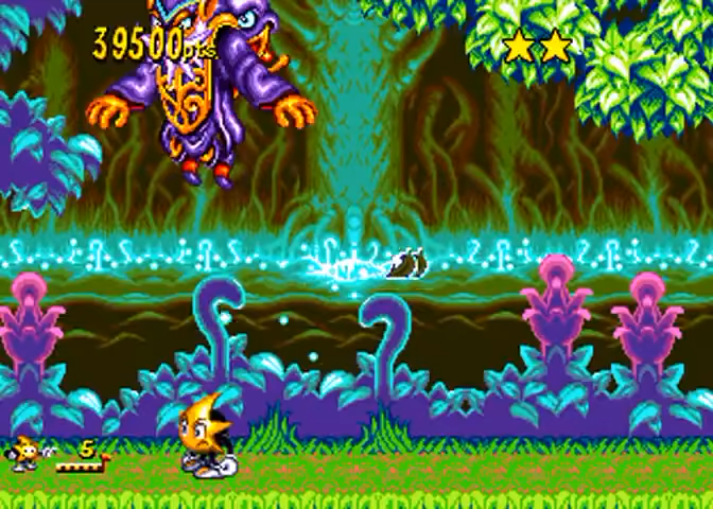 Get down here so I can rope-arm headbutt your ass, you dizzy bastard.

The digitized sound isn’t very good, and Ristar’s voice is creepily childish. The other sound, as well as the BGM, is pretty good. Not necessarily top form Sega stuff, but adequate. The visual experience is on par for a higher-quality Sega-produced Genesis game, with a lot of color and variety befitting the cute bubblegum flavor of the game as a whole.

I give Ristar 7 out of 10. It’s not what I’d call a classic, or even exceptional, but it brings enough of its own juice to the table and offers a fun experience to anyone who loves platformers.

Expect The third and final chunk of Sega-meat on Saturday, RetroFiends! Thanks for reading!