In some of the older D&D books from the golden days of TSR (namely “1st edition” Advanced D&D), The few incredible images rendered by masters like Erol Otus are surrounded on all sides by what can best be described as “almost art.” It's either strange 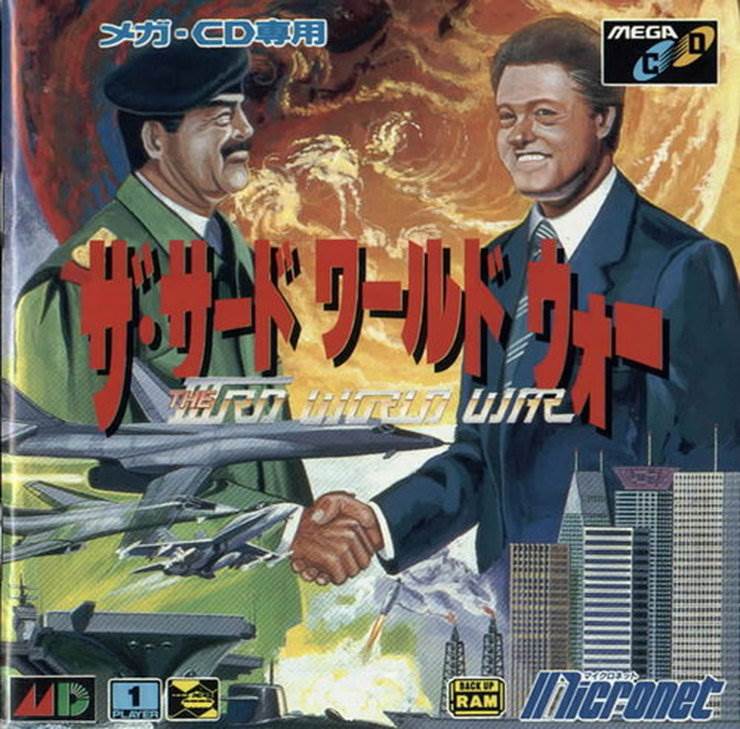 In some of the older D&D books from the golden days of TSR (namely “1st edition” Advanced D&D), The few incredible images rendered by masters like Erol Otus are surrounded on all sides by what can best be described as “almost art.” It’s either strange in tone, off-putting in its composition, or just somehow unwholesome in a way I find difficult to articulate.

Anyway, I won’t put any of it in here, because I’m getting to my actual point: the video game industry has its own share of this lowest-common-denominator ramrod surrealism. Images clearly rendered under deadline while suffering from sleep deprivation, questionable pieces of illustration drawn by people who were likely being paid in subway tokens, and even some visual corruptions that will haunt the industry until its death some 5 billion years hence when we are cooked off of this rock by our sun’s death throes.

I will warn you – nay, I admonish thee, brave wanderer. To step forth may cost you your sanity, or worse. I Offer you a garden of unearthly artistic display… some truly ill shit in illustration form. 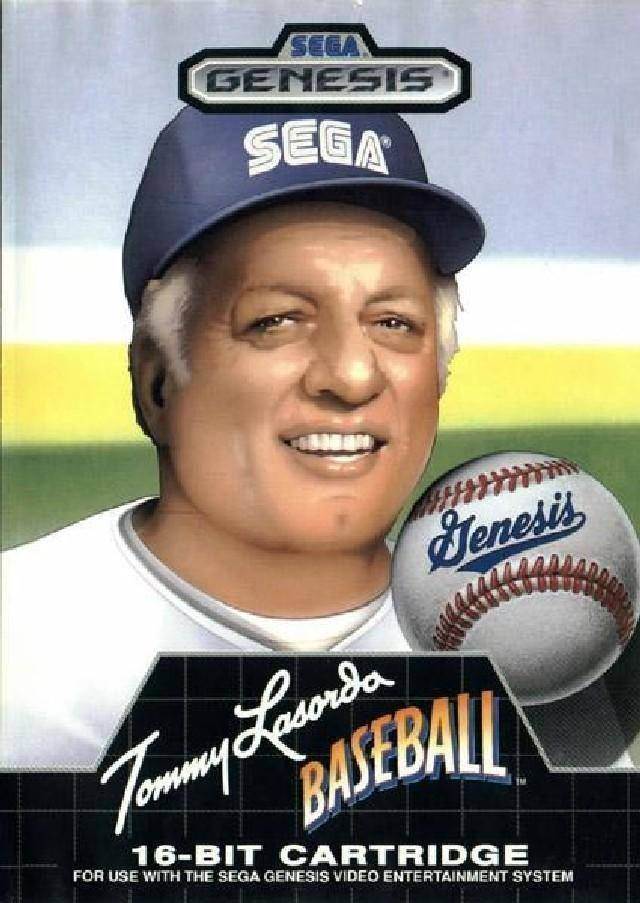 You know that it is daytime – the sun is high and bright, throwing all into stark contrast – but you do not know the day. The blurred lines of a baseball stadium form a primordial, half-shaped, Archean terrain in the background… and yet you cannot look at the background. You cannot look at anything but Tommy fucking LaSorda. OR IS IT?

His eyes, lazy and half-closed, fix on you and do not look away. His teeth, jutting from his mouth in an expression halfway between a smile and a predatory sneer, are perfect. Fuck, they are IMMACULATE, like something unused and unspoiled. Something there just for looks. Tommy’s skin bears a striking resemblance to silicon; like the “flesh” of the god-awful robots our postmodern pervert tinkers craft in the human image, Tommy’s flesh is new. You see now that he is not sweating… but you are sweating.

“Play a little catch?” he tips his head ever so slightly as his mouth releases the tinny sound of words. You cannot run. You feel pressure and then blackness engulfs you.

Why not just use a photo? It’s not like there’s any shortage of photographs wherein LaSorda is at least prominently featured, if not the subject of said photograph. I am chalking this one up as an act of psychological warfare, Sega. 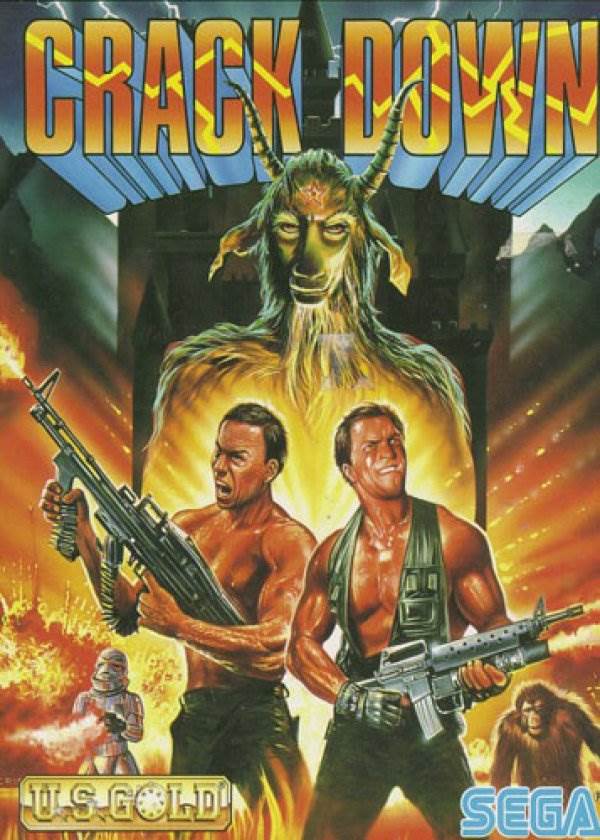 Two very greasy and ruddy men stand proudly before the Prince of Evil himself, Satan. They can barely keep it together… in fact, they’ve decided to just push it to the max. The Guy on the right is pooping; don’t say that he’s doing anything else, I won’t believe you. That man is filling his pants with hot sod while he empties his magazine and his under-slung grenade launcher at the same time. Dude on the left has better self-control when it comes to bathroom action, and has settled for filling the air with rounds from his M60. Satan has seen this shit before, and so has his buddy the mouth-breathing orangutan. Besides, just five minutes ago they polished off a fat bowl in the explosion-castle and it’s kicking in T-minus right fucking now.

What the fuck is even supposed to be in the ripoff Stormtrooper’s hands? What is he brandishing? A road flare? My point is that no one knows what they’re doing and clearly no one’s “cracking down” on jack shit. 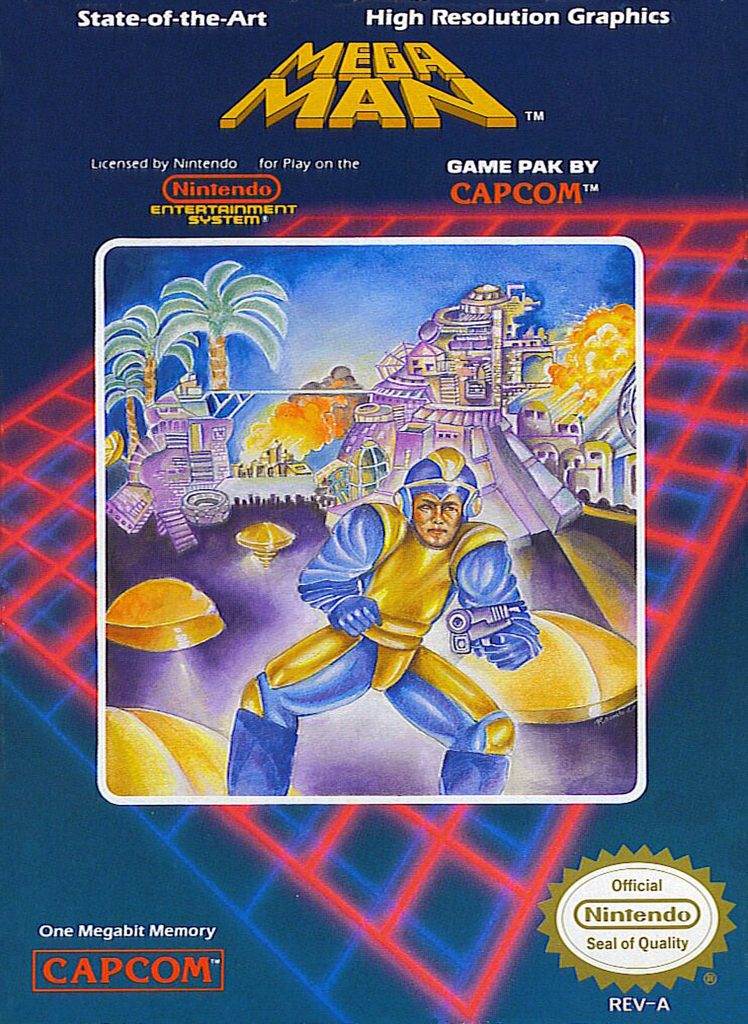 I wanted to take another look at this. I mean, how can’t we? Eyes red from crying all night, riding high on the power only a man with a gun can know (and also more cocaine than is reasonable), Rock searches the uptown terraces of Purple City for the bomber whose reign of terror has claimed so many lives.

“I’ll find you!” he howls, cranking his little-kid arms back in teeth-grinding rage. “Goddamn it, why can’t I PULL MY RIGHT LEG OVER BY MY LEFT!” No one hears Rock but the colossal palm trees and the God that made him a boy-sized android.

I fucking WISH Mega Man was like this. Like Blade Runner mixed with 10 to Midnight. Scare my shit right out. Show me what real life is like, for great justice.

This one’s bizarre and completely detached from its parent concept, but I love it and I will probably print it out into a 24×36 to put on the wall.

There are so many details about this that are haunting. I’m not even sure where to begin. Wait, yes I am. The first thing I reflexively hate about this is the unbridled look of smug elation on both mens’ unthinkable faces. I’m not trying to make a partisan political statement by declaring my hate for Bill Clinton; this image did the mental legwork for me and even if he spent 24 hours a day every day pouring trash bags full of money into orphanages it wouldn’t un-burn this into me. At least you can’t see the raw menace in Saddam’s eyes. Bill is rendered in such a way that, while this is unmistakably him, it is also clearly not him. It is a spirit from the netherworld given flesh, and it thinks this whole thing is funny.

They are both impossibly huge, looming over the cities of Earth as a… what looks like also Earth somehow keeps a tight orbit. Hussein and Wendigo-Bill are the means of Change, the Makers of the Way, everywhere and everywhen. They have made this moment as they want it to be, and you will envy the dead. 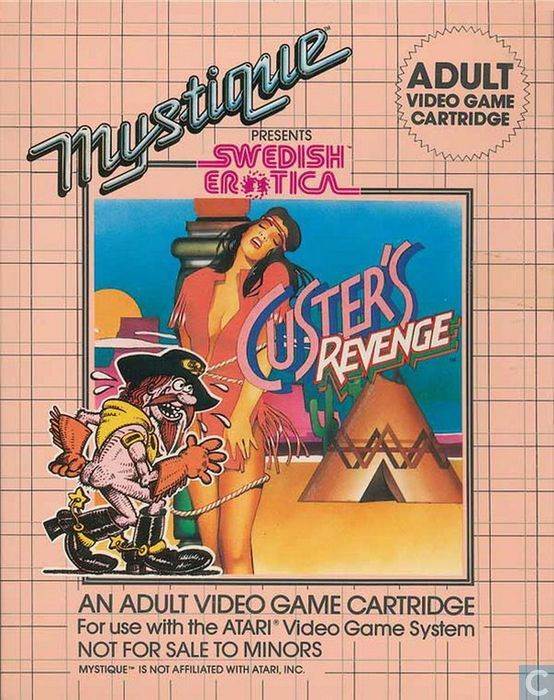 It says “Swedish Erotica” on it but I refuse to accept that this could happen anywhere but America.

George Armstrong Custer (1839-1876), despite his justifiably controversial legacy, was a well-respected cavalry officer who played a pivotal role for the Union in the Civil War. He died at age 36 at the Battle of Little Bighorn – a violent death fit for a man who lived by the sword.

I’d like to be able to show him this shit right now.

Somewhere in the flats of the Vaporwave Desert, a vector-shaded Native American woman struggles against her bonds. It seems that someone has tied her to a gigantic can of spraypaint. Was it Custer?

It probably was. He clunks up in his oversized boots, like a son wearing his father’s shoes to be cute. Looking like some kind of plucked-chicken goblin, Custer makes sure to strike a pose that shows off how his butt is just two large potatoes flecked with beard stubble. DOES HE SHAVE HIS ASS? WHY?

Better wear your gloves, man. Wouldn’t want to touch anything with your hands. Just your… everything else.

Obviously we can get all social justice on this, and we’d be absolutely right to. Unfortunately, the harm’s already done, and I dragged this back out to re-live it. I can apologize, but will that mend what is riven? God no, and it’s compounded by the fact that Custer is TERRIFYING. Naked dress-up Chucky with a boner.

Okay, we’re done. I will review a nice cutesy Japanese game next month. We will recover. I’m sorry and I love you.