It has been making the rounds recently that Wizards of the Coast will be reviving “the classic campaign settings.” Best guesses have been: Spelljammer; Planescape; Dark Sun. Let's talk about Dark Sun for a minute. I've been waiting for an excuse. Why not now? Athas, the world

It has been making the rounds recently that Wizards of the Coast will be reviving “the classic campaign settings.” Best guesses have been: Spelljammer; Planescape; Dark Sun.

Let’s talk about Dark Sun for a minute. I’ve been waiting for an excuse. Why not now?

Athas, the world of the Dark Sun D&D setting, is neck-in-neck with Spelljammer (D&D in SPACE, motherfuckers!) for the title of “Best Thing TSR Did Mostly Right.” X-Men meets Spartacus meets Mad Max meets Prince of Persia on bad acid. That’s the best way I can summarize the world of Athas in one colorful sentence. 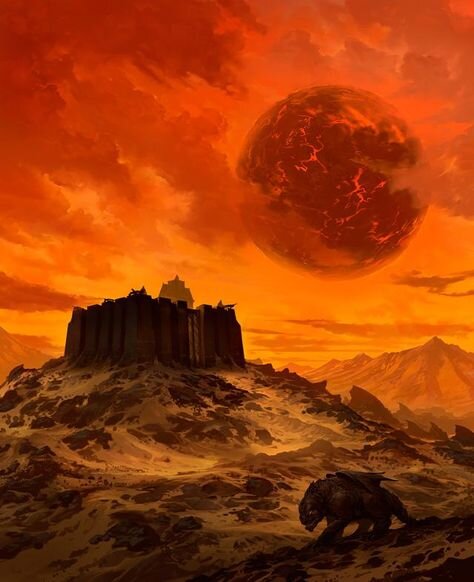 The sun is dark red because the halflings had to use some of its energy to stop something called the Brown Tide a long time ago. Make a poop joke if you want, I’m not going to. Whatever went down, it fucked the halflings up bad, because they’re all basically cliff-dwelling cannibal murder hippies now. Not that most Athasian humanoids are any better in terms of cultural character.

A Land Scorched by Arcane Magic

The land is barren and dry, drained of vitality to fuel the potent magics of the Sorcerer Kings and others; arcane magic draws up on the life of the planet itself and must be rigorously metered if no fallout is desired. Those good-faith wizards are Preservers. They have a secret organization, the Veiled Alliance, that acts as a support network. This is mighty handy, considering most of the Sorcerer Kings order any unsanctioned wizard dead on sight. The city-states are ruled by the Sorcerer Kings, potent wielders of the other “type” of arcane power: defiling magic. Defilers draw upon the life of the planet with abandon, more concerned with power than with ethics. Everyone BUT the Sorcerer Kings kill defilers on sight… if they can.

“Doesn’t this shit hole have any gods?”

People worship the elements, though, and that seems to work pretty well. There are priesthoods of water, air, earth, and fire, as well as composite elements like rain (rare on Athas), magma, silt, and sun. The elements have no real feelings about good or evil, law or chaos; even they, as proxy deities, value survival over all other concerns. All they desire is to be paid tribute and protected.

Templars are weird pseudo-priest administrators who carry out the Sorcerer Kings’ will; these soldier-bureaucrats are granted spells by their patron as if that Sorcerer King were a god.

Oh, there are druids, too. 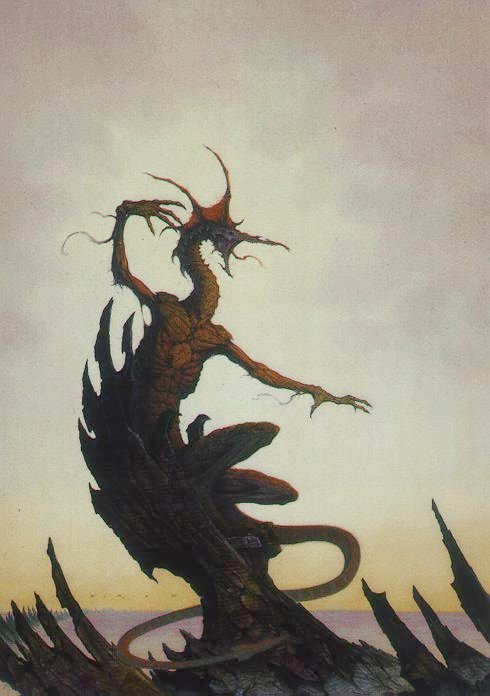 Pictured: The end result of a career as a sorcerer-king. Not as sweet as you think. Every bit of magic you use requires a ton of living things to fuel it, and you have to eat spheres of pure obsidian that are very difficult to swallow. Daddy’s medicine isn’t always fun. You just think it is because your children’s Motrin doesn’t do shit.

So What’s This I Hear About Psionics?

Almost every living thing on Athas has some psionic (think psychic) capability. This includes (usually) every humanoid creature, including the players’ characters. It also tends to include giant lizards, marauding monsters, and even cacti.

Yes, on the world of Athas, even a cactus can fuck with your mind.

Some creatures – namely sapient, humanoid creatures – can further refine this raw ability by studying The Way. In game terms, this is represented by the psionicist character class. Psionics, while similar in effect to magic at first glance, works on a totally different level; while magic calls upon some exterior source for its power, psionic manifestation draws upon the inner will of its user and the inherent power of the mind. Does a cactus have a mind? Shut up, this is fantasy. This is Professor Xavier shit.

One of the most viciously hardcore aspects of life in the world of Dark Sun is the scarcity of metals, especially the really useful ones you find in a standard fantasy setting, like iron/steel, copper, etc. Coins are ceramic, and even these can be split into “bits” for change. A silver coin represents a hefty sum to most people, and gold is nearly mythical to those below the status of nobility.

So what happens when two Athasians love each other very much and decide to murder one another? They use bone, stone, obsidian, or just wood. Metal equipment does exist, but if you’re carrying it around, odds are that you either 1) have power 2) stole that shit from someone who does (good luck staying alive). There are even a few setting-specific weapons, many of which originated from the arenas, that are specifically designed to be made of organic materials.

So if you’ve ever wanted to slay a man with the leg bone of a fictional herd animal, Athas is the place for you. Opportunities abound. 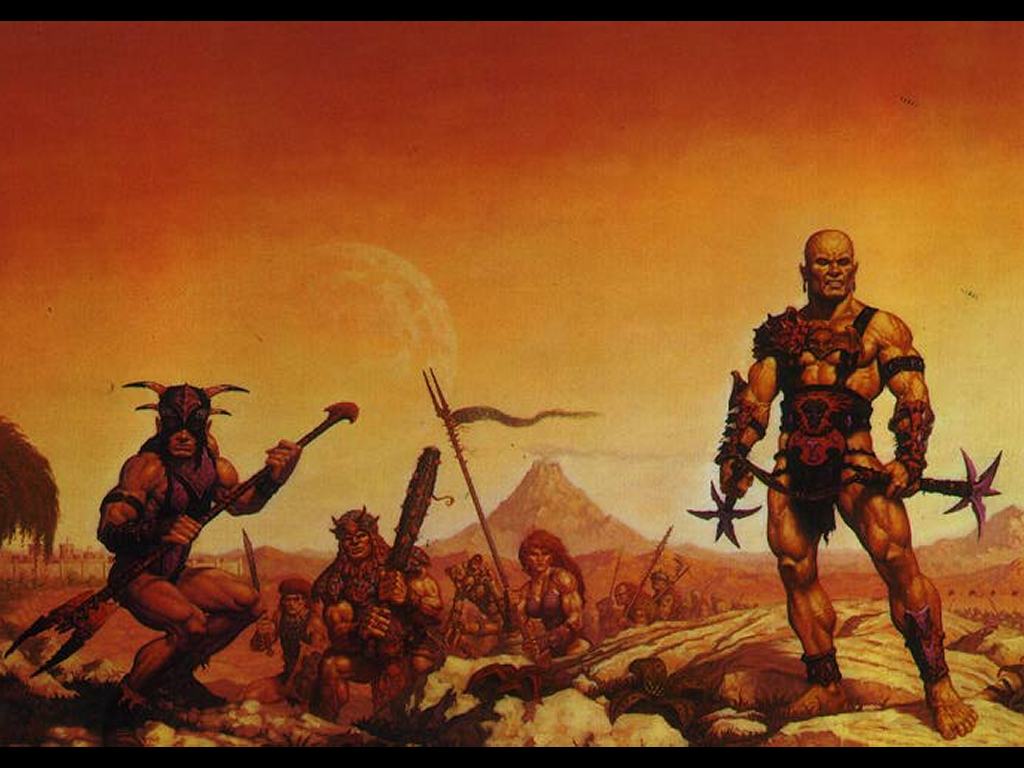 Forget Paul Stanley’s strutting ass. These guys are the kings of the night-time world.

In the city-states run by the sorcerer-kings, as well as plenty of places beyond, human life is pretty cheap. A human being (or elf or dwarf or half-giant or whatever) is worth less than his weight in water or iron. Far less. Not only can this mean wholesale death, it also manifests by way of an unfortunately bustling slavery racket that is as ubiquitous to Athas as the sand of the desert. In some of the original adventure modules for the setting, the players even begin as slaves building the mysterious ziggurat of King Kalak of Tyr. This may seem like the least rewarding scenario ever, but obviously players can fight to free themselves (and even kill King Kalak). Slaves are used for all the mundane and even unsavory things they have been in real world history, including as gladiators. No lines mark anyone exempt from slavery, and even a noble who fails to pay a debt or breaks a law may find him or herself in chains.

While this may at first seem like a dire and depressing backdrop for any D&D campaign, it is actually meant to give the players something they can meaningfully strike blows against. The sorcerer kings themselves are monoliths of untouchable power. The world is blasted, and even with powerful magic, un-blasting it is kind of a pipe dream. But you can set people free from their bonds, thus inching the world of the Dark Sun a bit closer to what it should be.

This summary doesn’t do anywhere near full justice to the setting of Athas. If you’re interested in learning more, I recommend the Prism Pentad novels, as well as a copy of the Wanderer’s Journal booklet from the old box set (if you’re even minimally resourceful you can find this digitally, but it’s illegal for me to just share it). I just wanted to take advantage of the small bit of buzz and write about one of TSR’s greatest marks on the RPG industry. Athas is a unique world, a blend of inspirations and themes that captured the imagination of many roleplayers in the 1990s. If it is resurrected, it will likely be in a watered-down form not unlike they did for 4th Edition (god damn you, WotC!) and I accept that. I will always have the original, undiluted smack to cherish. 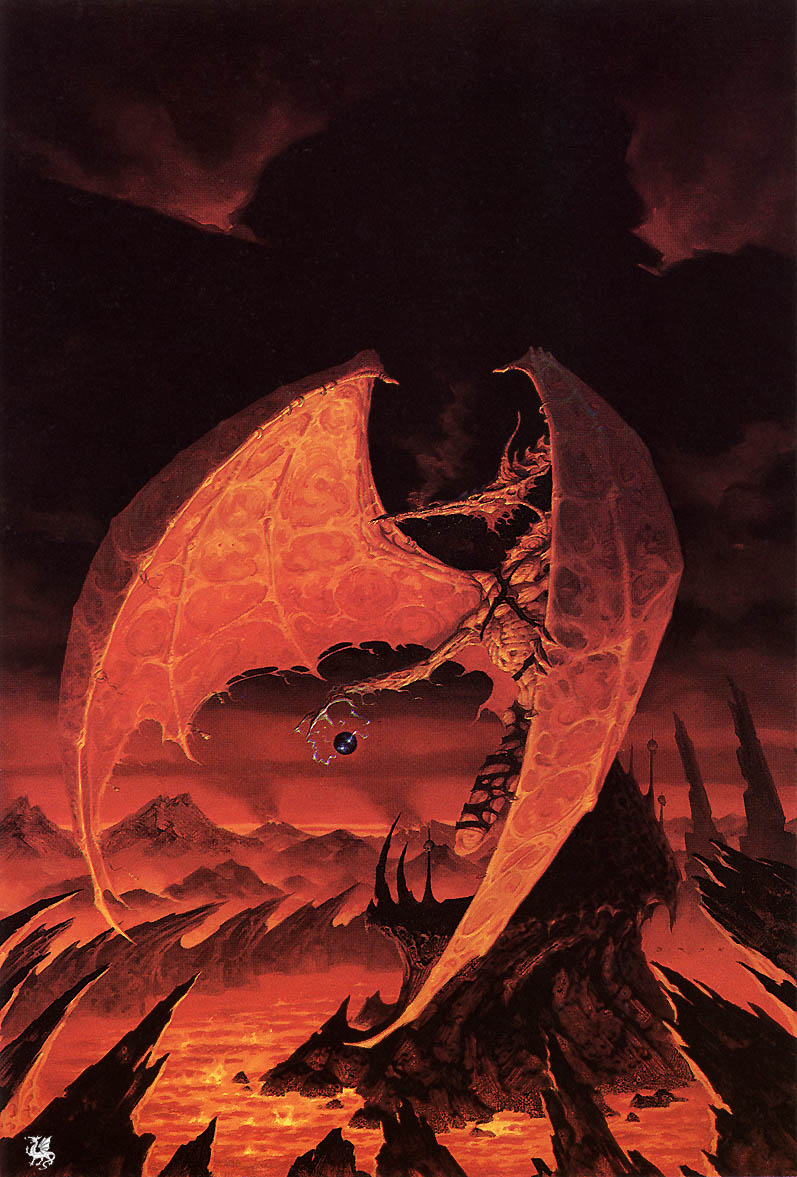 Be careful out there in the wastes, and stay retro.