“Hey, do you still play D&D?” I've heard this more often lately. A lot of my friends and acquaintances suddenly have a much more open-minded opinion about my hobby now that everyone's been forced into bored desperation. But one thing I've never been is a gatekeeper.

I’ve heard this more often lately. A lot of my friends and acquaintances suddenly have a much more open-minded opinion about my hobby now that everyone’s been forced into bored desperation. But one thing I’ve never been is a gatekeeper. I’m always eager to discuss tabletop RPGs with anyone who displays curiosity about them.

“Which system should I play?”

Now, there’s the important question, and it deserves a well-thought-out answer. There isn’t just Dungeons & Dragons. There are tons of popular systems on the market; some are genre-specific or cater to a preferred play style, and some are so amazingly simple or versatile that they can adapt to any story you and your friends want to play out. With tools like Roll20, Fantasy Grounds, etc., it is still totally feasible to play tabletop RPGs even if you and your crew don’t feel safe gathering in person yet. So, for those who have been thinking about it but haven’t gotten their feet wet yet, I’ve decided to run down the pros and cons of a few game systems worth your attention while you consider your options. This will be a multi-part series, and in this first part, I’m gonna bite into three of the rules sets I’ve been using in my two online gaming groups. Two of them are well-known, the third not so much. All three are a lot of fun and I encourage you to look into them beyond the scope of this article if you have interest in tabletop role playing.

Note: I have not provided hyperlinks to anywhere you can buy books, for two reasons. Firstly, reviewers shouldn’t do that without compensation from whoever they do that for, Secondly, if you’re actually interested in any of this, you’ll open a tab and do some Google searches. You’re grown. I may include hyperlinks to sites hosting Open Gaming License content (the parts of some game systems considered “fair use” or “public domain”) but, if and when you decide to buy the books, you do your own shopping and find a deal because this shit can be expensive.

Wizards of the Coast 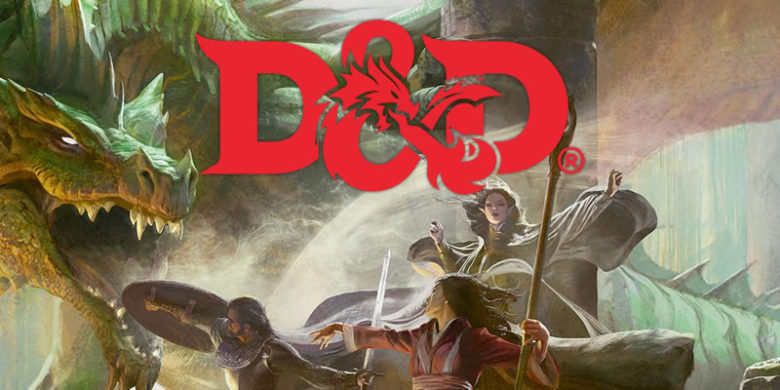 5th edition (5e) D&D is the culmination of decades’ worth of development. This is the game that started a hobby. Luckily for you beginners, 5e is also both easy to learn and extremely popular among tabletop gamers of all experience levels.

The rules have been written with simplicity and inclusiveness in mind, and the rules set hasn’t been subject to quite as much uncontrolled growth as previous editions. Most of what WotC has been publishing for 5e has been campaign material and adventure modules – stuff meant to save Dungeon Masters work instead of more rules and expansions to keep track of (and worry about game balance because of). You still get to play with all the colorful different-shaped dice and the game still “feels” like D&D to everyone, but the math is kept simple and the rules are just clear enough to allow for easy play. The vagueness can also be a drawback, but in a game like this, the DM will want a little leeway to make rulings on the fly. The action can be as deadly (or non-deadly) as the group’s taste dictates. What’s more, there is a bustling organized-play community (both online and at gaming shops, put on your mask and go, it’s worth it) that can help introduce new players to the game and aid in finding peer groups for more casual play. You don’t even need to invest in the books first. Try it before you spend anything. That’s one major roadblock for potential new players; the game can seem prohibitive when the MSRP for a book is about $50 USD (its one major drawback, and one that it shares with certain other systems).

5e is what I’d recommend as the “first taste” for people curious about the hobby. You’ll at least understand what’s going on after observing gameplay for a few minutes. It’s also easy to try out being Dungeon Master; 5e’s Dungeon Master Guide is actually a guide instead of just a collection of data, something that sadly cannot be said of that book in earlier editions of the game. “Approachable” is the keyword here. If you find yourself craving “crunchier” rules that allow for more customization, or just want a ton more to choose from on either side of the DM screen… cut your teeth on this first and then try something like Pathfinder. However, if you like the idea of a rule set whose fully intended purpose is to stay as far out of the story’s way as possible, 5e is a fantastic choice. 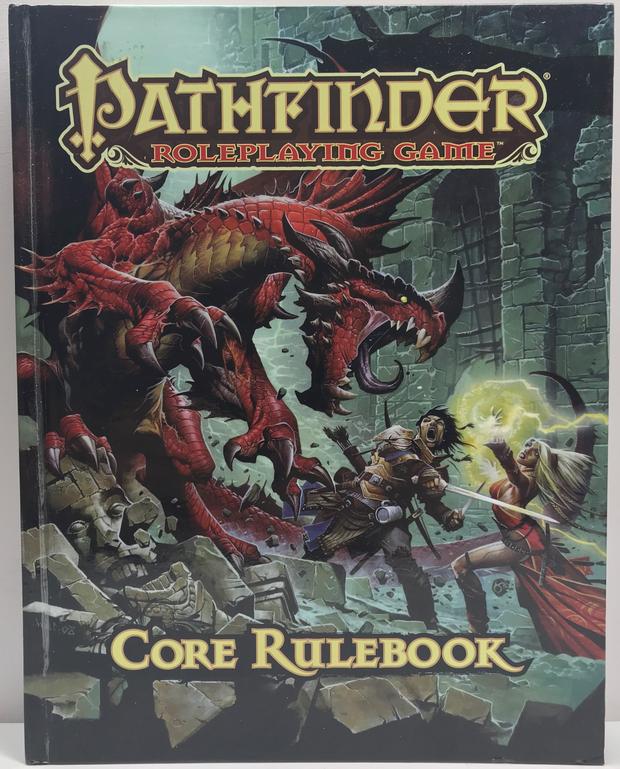 Pathfinder, easily the most option-rich (while still playable) tabletop system in the fantasy genre, is so customizable and adaptable that it’s not even that firmly glued to that genre if you don’t want it to be. Among what I’d call intermediate tabletop gamers – those who want more substance than 5e D&D offers but who don’t want to get out their calculators to play fucking Battletech – Pathfinder 1e is the go-to system.

As a player, you can build just about anything with these rules if all of the splatbooks (books containing expanded or new rules) are allowed; witches, psychics, fist-fighting lizard people, half-elemental martial artists, even gunslingers or magical androids… and that’s just some of what I’ve seen and done. Pathfinder is based on the 3.5 edition of D&D’s core rules, which were also very customization-friendly but needed a streamlining overhaul. That’s exactly what Paizo did.

For those new to Pathfinder, I offer this advice: if you have more experienced Pathfinder players in your play group, ask them for advice about building characters. While 5e D&D makes it hard to come up with an unplayable character, making haphazard character-building choices in PF can lead to you not really enjoying yourself if the rest of the group has successfully put together “optimized” builds. This is a more involved and intricate system, but the math and mechanics are still easy to pick up and will still seem reasonable when you witness them in real time play.

PF 1e’s only other major drawback, which mostly affects those who are still getting used to it, was best described by one of my fellow players as “analysis paralysis.” This is also referred to as “embarrassment of wealth.” There are so many choices, options, races/classes, etc. that it can hang you up if you aren’t used to swimming through it on your own. Do not be overwhelmed; ask for advice. While PF takes a little time to warm up to, it is a lot of fun and lets players really open it up and take it out on the highway in terms of creativity once they’re familiar with it. 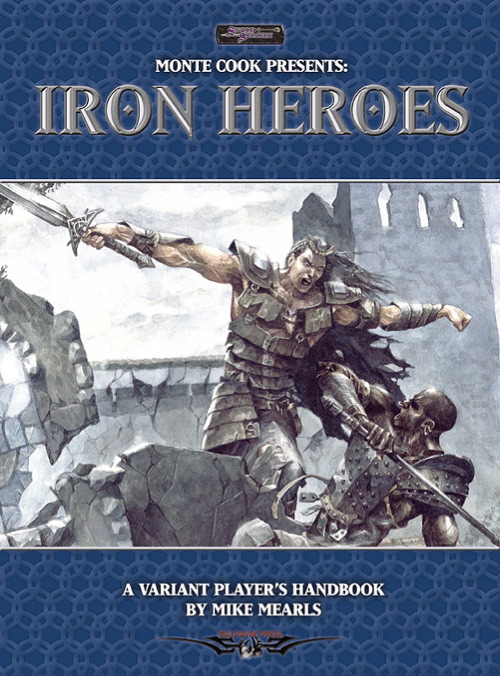 Another cleaned-up iteration of D&D’s 3.5e rules, Iron Heroes is designed for low-magic play with an emphasis on action-packed combat and a “sword and sorcery” feel reminiscent of pulp fantasy like the works of Fritz Lieber and Robert E Howard. In fact, I currently run a campaign using this rule set that is based heavily on Howard’s Conan stories, and this system is beautiful for that type of thing.

Combat is the focus of Iron Heroes, and every character class reflects its own general approach to murdering your foes. You can be clever, brutal, sneaky, versatile, you name it. The exception is the Thief class, which places far more emphasis on indirect problem solving (social manipulation, scheming, etc.) but still manages to hold its own in a fight. Magic-using characters are typically used as villains in campaigns using these rules, and almost never permitted as player characters.

Unlike many fantasy systems out there,armor doesn’t serve to negate a hit in combat. It instead helps mitigate damage taken. In exchange, characters’ defensive capabilities are directly tied to a class-based bonus. I mean, take Conan for an example: the dude is rarely depicted wearing armor, and tends to stay alive and relatively unhurt due to his sheer rippling badass battle prowess. You are all warriors in Iron Heroes; it’s just that “warrior” is more broadly defined and allows for a a lot of different play styles. A token-based system allows for great deeds of martial heroism without magic, and a multi-tiered system of “feats” (custom ability trees meant to reflect different sets of tactics) enable characters to specialize or generalize while playing around with the elaborate-but-sensible combat rules. There is a lot that goes into Iron Heroes, but it is easy for players to unpack as they go and mostly fits in the one book (though a Player’s Companion is available with a few expanded options). Game Masters will find the last chapters of the book very enlightening, especially the guidelines for adapting material from other d20 System sources (3.5, etc.). My favorite thing about Iron Heroes is that you really only need the Core Rulebook and a touch of creativity to make a really fun world for your swordsmen, amazons, archers and ruffians to explore (and paint red with the blood of their foes).

If your group wants to capture that gritty, raw feel of things like the Conan Saga or even Game of Thrones, this system is worth looking into. It’s a great system if you try other fantasy stuff and you discover that you enjoy the feel of a trusty sword-arm over the sometimes overwhelming flash of spells and sorcery. In the next installment, we’ll examine a few systems that branch out from standard fantasy into other genres. You’ll likely get a video game-related article in the meantime. Everyone keep your heads up, stay sane and safe, and most importantly, stay retro.

Special thanks to Jonah Skrove (whose own works deserves a look), Zach Copic, Ben Pearce, and Quentin Walker.