I have ranted and raved about Dungeons & Dragons constantly, here and elsewhere, since 1996 when a classmate sold me on the concept during a middle school science class when we should have been paying attention to a lecture on the Periodic Table. While I

I have ranted and raved about Dungeons & Dragons constantly, here and elsewhere, since 1996 when a classmate sold me on the concept during a middle school science class when we should have been paying attention to a lecture on the Periodic Table. While I never ended up memorizing any of the data on that table, there is an abundance of information from D&D that is indelibly tattooed upon the wrinkles of my brain.

Part of what makes the game and its history so awesome to me is the artwork from its books and publications. The newer versions have very crisp, heavily stylized art that speaks more to an MMO flavor; I have always valued the old school art more, both for its “purity” of style and for its plain beauty. When the intellectual property was in the hands of TSR, creativity was unbound and wild. This not only applied to the worlds presented in the various products, but the images used to represent those worlds. This article is a small love letter to that purity of expression. I’ve found five pieces of artwork by five iconic D&D artists, each of whom are synonymous with the game itself in the minds of old school fans everywhere.

Note: Many pieces of official art were re-used by TSR to fill out multiple RPG products they published over the years; this was done most frequently in their later years as the company waned in fortunes and sought to get mileage out of old assets while pushing the limits of the game itself. I will provide all the information I can about each image, but at the very least I have made sure to correctly name the artist and at least one known product the image was used in. 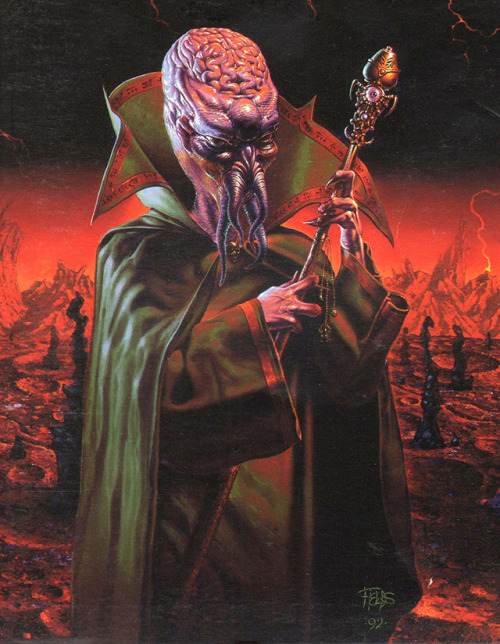 The Illithids, or mind flayers, are iconic monsters that came directly from the lore of D&D and were not drawn from external myth, legend, or literature. Terrifyingly intelligent creatures, these fiends both consume and control the minds of other sapient beings in order to further their own existence. Armies of brainwashed slaves furnish both cannon fodder and food. With their “mental blast” attack and various other psychic abilities, illithids present a daunting challenge to mid-level adventuring parties and can annihilate the very hopes and dreams of unprepared rookie groups. Any veteran of the hobby knows that a battle against mind flayers will require both courage and caution. They’re not to be casually fucked with, unless being a brain-dead portable meal or servant appeals to you as a career path.

Fred Fields has rendered one of these horrible beings in nearly photographic detail, while preserving the fantastic nature of the subject for us to marvel at. And be afraid of. Very afraid of. 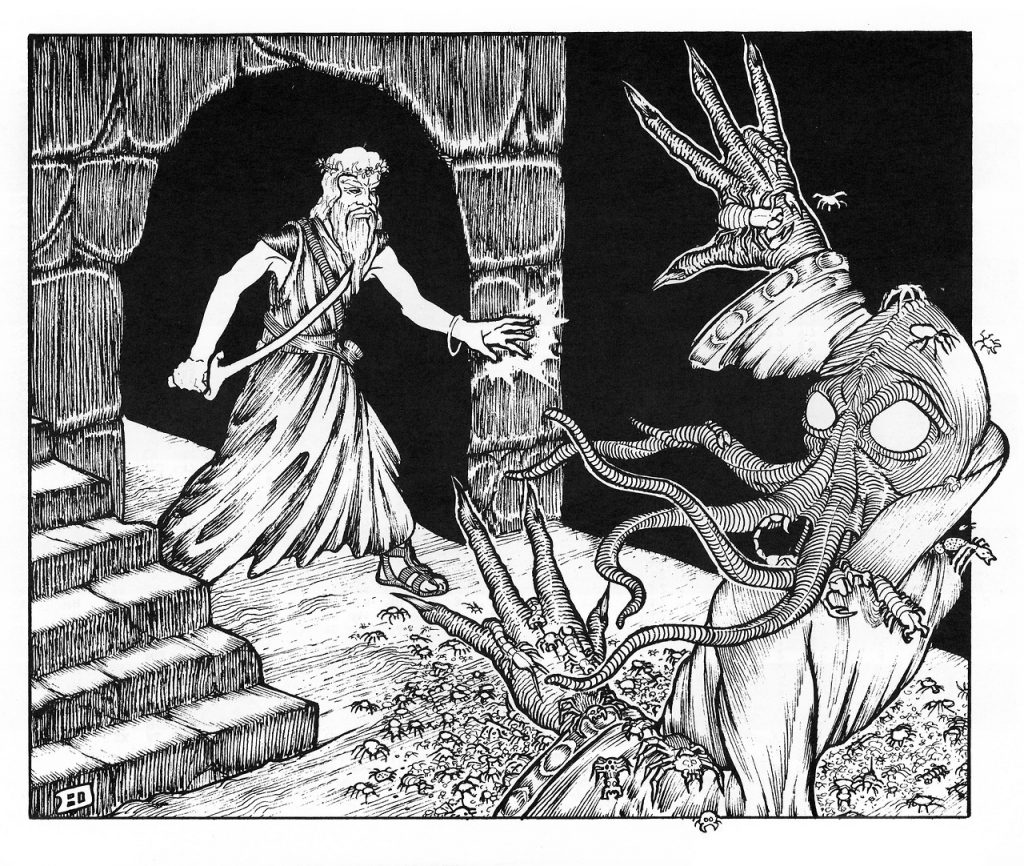 “Ooh, finally some fresh brai- OH SHIT WHERE DID ALL THESE BUGS COME FROM SORRY SORRY DO OVER OUCH OW FUCK”

“Creeping Doom” is a powerful spell available to druids and other priest-type characters in D&D that calls forth massive swarms of bugs to devour anything remotely edible in their path. In this example by the legendary Erol Otus, the spell is being turned upon one of the aforementioned mind flayers. The monster does not look too pleased to be snuggling one of the Old Testament plagues, and may be reconsidering its options.

Erol Otus’s style is phantasmagorical and cartoonish at the same time. I love the exaggerated expressions and the weirdness of every detail… and there is always so much detail. Otus is a master of illustrating strange things in a memorable way. His work for D&D was mostly limited to 1st edition, which was a bit before my time, but I have developed a love for his style nonetheless. This illustration is my favorite of his; it has immediate impact and conveys the action so well you can almost envision it moving.

The wild sense of panic on the face of the normally inscrutable and soulless mind flayer is what anchored this drawing in my mind for years after seeing it.

“Dragon Slayers and Proud of It” 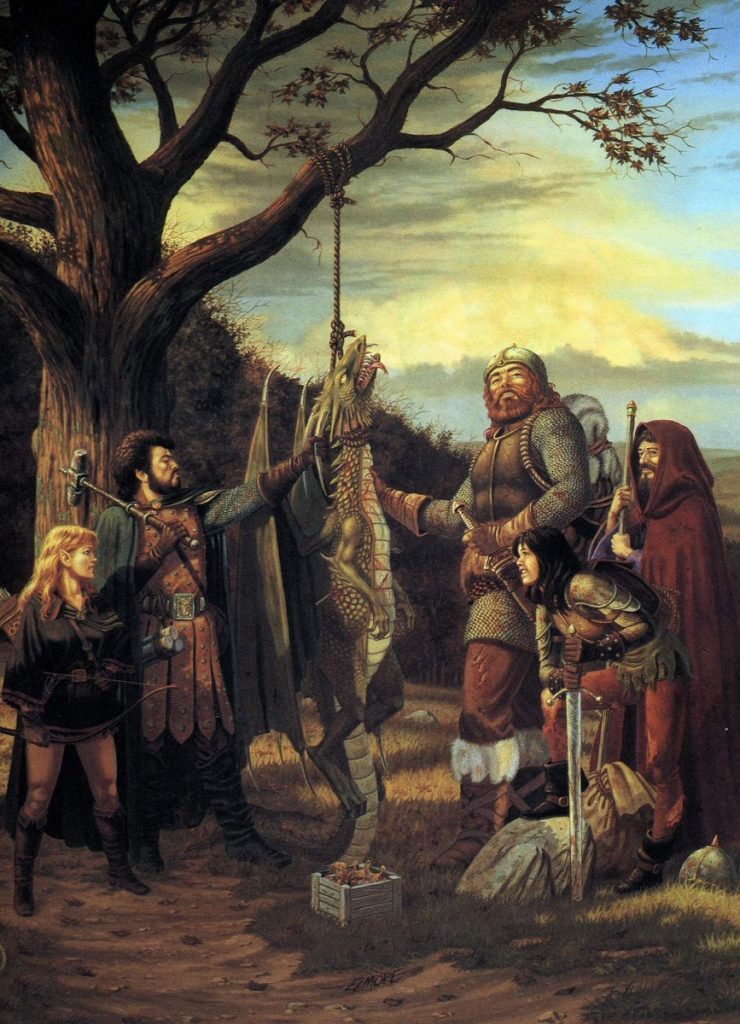 I remember the first dragon I helped bring down as a player. It wasn’t even evil; it was a sapphire dragon (lawful neutral) that simply gave us no other choice after we accidentally intruded upon its territory, refusing to listen to what we had to say. Unfortunate, but it made for a memorable encounter during my formative years as a player. Most of us who play D&D can tell you about our first dragon kill if we’ve ever had one. Even young dragons of “weaker” types make for challenging foes. They are intelligent, powerful, versatile, and have centuries to plan for visits from foolhardy heroes who would claim their hoards of treasure.

Look how tired but proud they are, having bagged a young green dragon after what we can only imagine was a pitched and tense battle. I especially love the female warrior, leaning on her sword, dirty and scuffed but absolutely thrilled to have conquered he beast. There aren’t (normally) any cameras in D&D worlds, but they look like they’re posing for a photo, like fisherman with a huge catch. Lots of pathos and identity in this image. Larry Elmore captures well here what it really means to be an adventurer. And don’t feel bad for the dragon; greens can ruin an otherwise idyllic forest and are very much evil creatures. Think of this dragon-slaying as an act of ecological conservation. 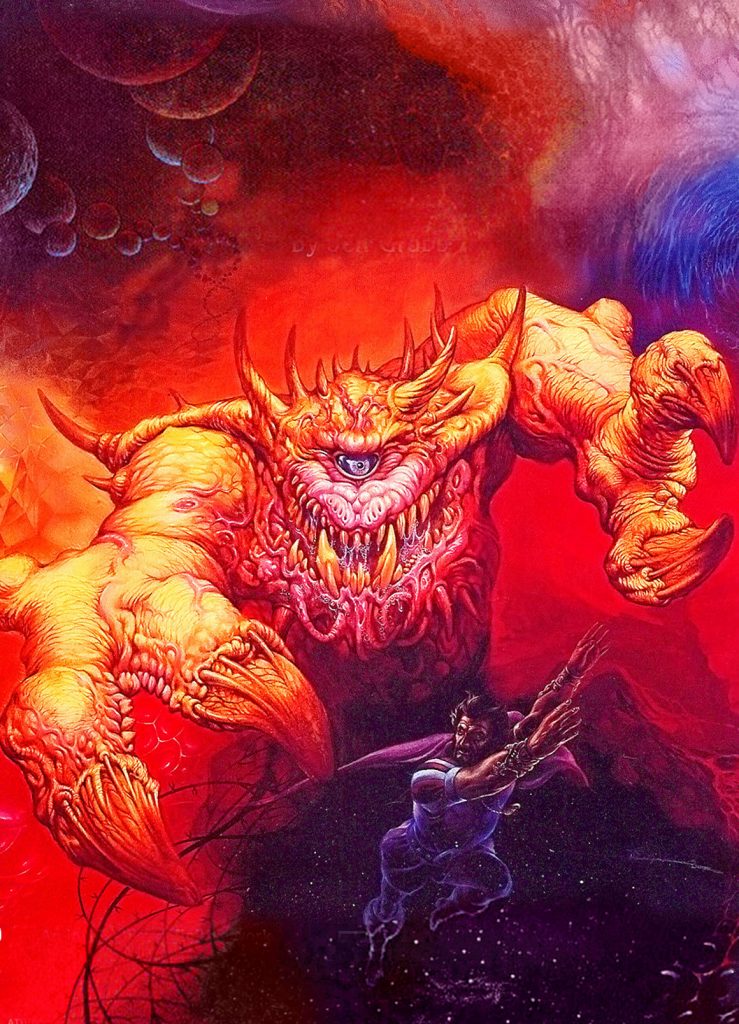 You may immediately recognize that monster’s face. Yes, it served as the basis for the design of DOOM’s cacodemon. That’s how far-reaching the influence of Jeff Easley’s fantastic art really is. Easley is one of the most talented and prolific contributors to D&D’s art library, and easily in my personal top three fantasy artists, period. Here we see the actual creature, an astral dreadnought, chasing a very unfortunate mage through the silver void of the Astral Plane that connects the Prime Material (D&D’s “real world” dimension) to other dimensions known as the Outer Planes (Limbo, the Nine Hells, the Abyss, Elysium, etc.). Dreadnoughts are horrifically powerful creatures that prowl the Astral Plane looking for food. This wizard needs to hope he can escape before he becomes a chicken nugget to this gigantic terror. That won’t be easy, since it’s one of the most potent creatures to be found on any of the planes and it cannot be reasoned with.

Easley produces classical-quality art, bringing fantastic things to life in a realistic yet cinematic style. Light, shadow and texture are represented expertly, lending depth and terrifying tangibility to his scenes. One can open almost any major TSR publication from the 80s-90s and see at least one piece of work by Easley. Whether it’s a painting like this one or a black and white ink drawing, it fucking pops. Just like this busted-ass wizard’s gonna pop like a cherry tomato in the dreadnought’s unspeakable mouth. 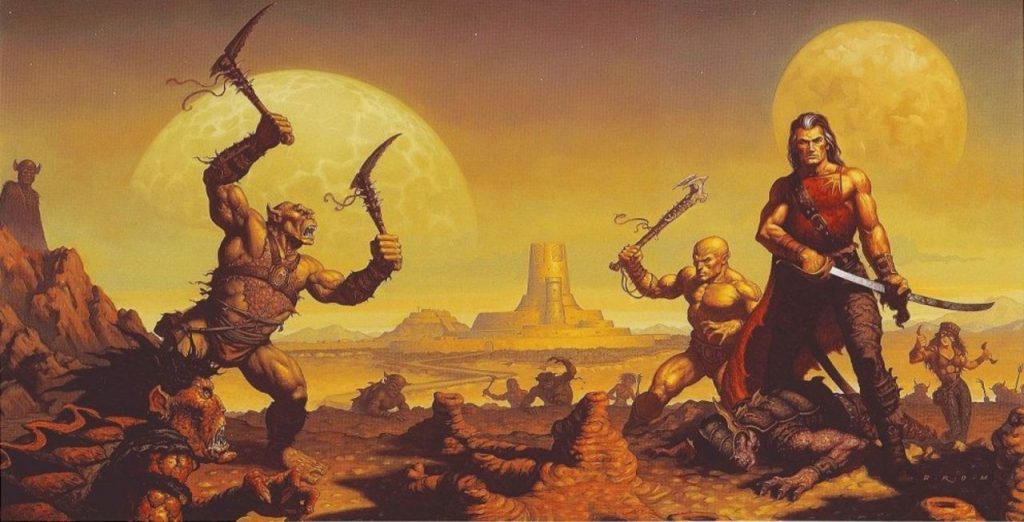 Athas, the dry and barren world of the Dark Sun campaign setting for AD&D, is a stark departure from standard fantasy. It’s like Mad Max and Ralph Bakshi’s Wizards animated film cross-bred with Star Wars’s Tattooine and mixed in a bevy of real-life Earth’s cultures from Antiquity. The world is dying, every living thing has psychic potential, life is brutal, and survival itself is a dire struggle. The magic of wizards is fueled by the dwindling energies of the barren earth, and the closest thing to gods are the four elements themselves. Water and metal are scarce and valuable, and even the more “civilized” areas such as city-states are chaotic places where death is only a heartbeat away. Dark Sun is hardcore as fuck. Be ready.

Two of the protagonists from the novels (which I heartily recommend to any fantasy reader with a taste for the unusual) are represented on the right hand side of this panorama; Agis of Asticles, Tyrian nobleman and master mind-bender, wipes clean his precious steel sword as the human-dwarf hybrid Rikus steps up behind him, ready to deal death with the honed expertise he has learned in the slave arenas of Tyr. The twin moons, Ral and Guthay, shine down on a scene of battle in the wastes outside the city, showcasing the unique flavor of the setting and illustrating the desperate struggle that is life on Athas.

Brom’s art is well-loved even outside of D&D. He is another artist in my top three of all time, with a gritty sense of texture and a knack for creating unique-looking figures within stark landscapes. Brom can make anything look badass or creepy, and his art became the lens through which D&D fans would come to see the world of Dark Sun. Nearly every DS product until the second/revised box set features cover art by Gerald Brom, and this allowed him to shape Athas for us at a glance. No one could have done it better.

I hope you’ve enjoyed this look at classic RPG art, and I will continue to revisit tabletop gaming from time to time in order to add variety to the normal video-gaming fare I write for NRW. Keep your eyes peeled for more gaming-related content, and Stay Retro!