Recently, John Romero released a fifth episode for the original, legendary 1993 DOOM. I hope you're ready to face hell again, because it's packed into this one tighter than rancid sardines. You will be hurt

Recently, John Romero released a fifth episode for the original, legendary 1993 DOOM. I hope you’re ready to face hell again, because it’s packed into this one tighter than rancid sardines. You will be hurt… plenty. John Romero is notorious among veteran DOOMers as the architect of some the most devious and downright cruel environments in the series. He has come back after more than 25 years to hit us with an uncompromisingly brutal series of maps that will test the living HELL out of you. You may think you’re bad. But Sigil’s packing infernal heat. You’re in for a faceful, Marine. Gear up.

Here is the story, according to John himself:

“After killing the Spiderdemon at the end of E4M8 (Unto the Cruel), your next stop is Earth — you must save it from hellspawn that is causing unimaginable carnage. But Baphomet glitched the final teleporter with his hidden sigil whose eldritch power brings you to even darker shores of Hell. You fight through this stygian pocket of evil to confront the ultimate harbingers of Satan, then finally return to become Earth’s savior.” 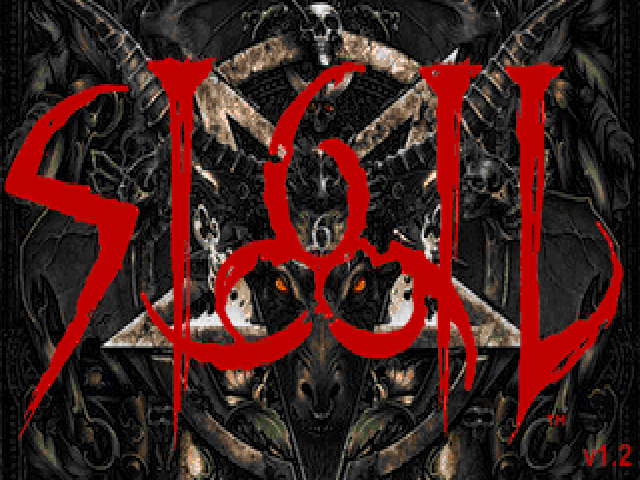 I am a pretty well-seasoned DOOM player, and can usually handle the original 3 episodes on Nightmare or at least UV. This shit is turning my guts inside out on Hurt Me Plenty. You will not see health much at all. You will need to be extremely careful. Yes, there are horrible monster traps everywhere. Inescapable pits too. You will die. You will know death again, Marine. You can never truly rest. But Space Marines are made for this shit. Let’s hit it.

E5M1 is a true gauntlet-run involving the elevation of platforms in order to find your way through a winding path of hitscanners and imps. The maps are very dimly lit, and instead of switches, Romero has us shooting the demonic eye symbols to activate/open things. I’ll save you the five or so seconds it’d take to puzzle it out. Sheol (E5M2) continues to incline the difficulty in a steady fashion. Breaking a sweat yet? You often find yourself with little room to move one way or another, measuring moments and shots, clinging to cover while whittling away at potentially deadly ambushes. I hope you like seeing barons and cacodemons up close, because you fucking will be. E5M3 is called Cages of the Damned, and it looks slightly more “conventional” as a map when you first start blasting through. Vaguely castle-like, with great run-and-gun action and a few open spaces (finally!) to use in combat. I’d even call E5M3 “classical” because of how true parts of it are to the original feel of the trilogy. You’re still, however, finding very little health. And yes, you’re still in horrible peril on a constant basis. Paths of Wretchedness (E5M4) is another hectic rim-grabber over pools of magma as you battle your way through a shooting gallery with you as the turkey. Movement is again limited, and you find yourself getting pummeled in bottlenecks – sometimes caught with your fucking pants down – and perishing if you’re not on your LeBron “Leatherface on Mars” James A-game. This level has a splash of that old alien-mechanical feel to it reminiscent of Knee-Deep in the Dead. Probably another of my overall favorites of the episode. While health is scarce throughout this episode, you will find enough ammunition if you are thorough, frugal, and keep your eyes open. 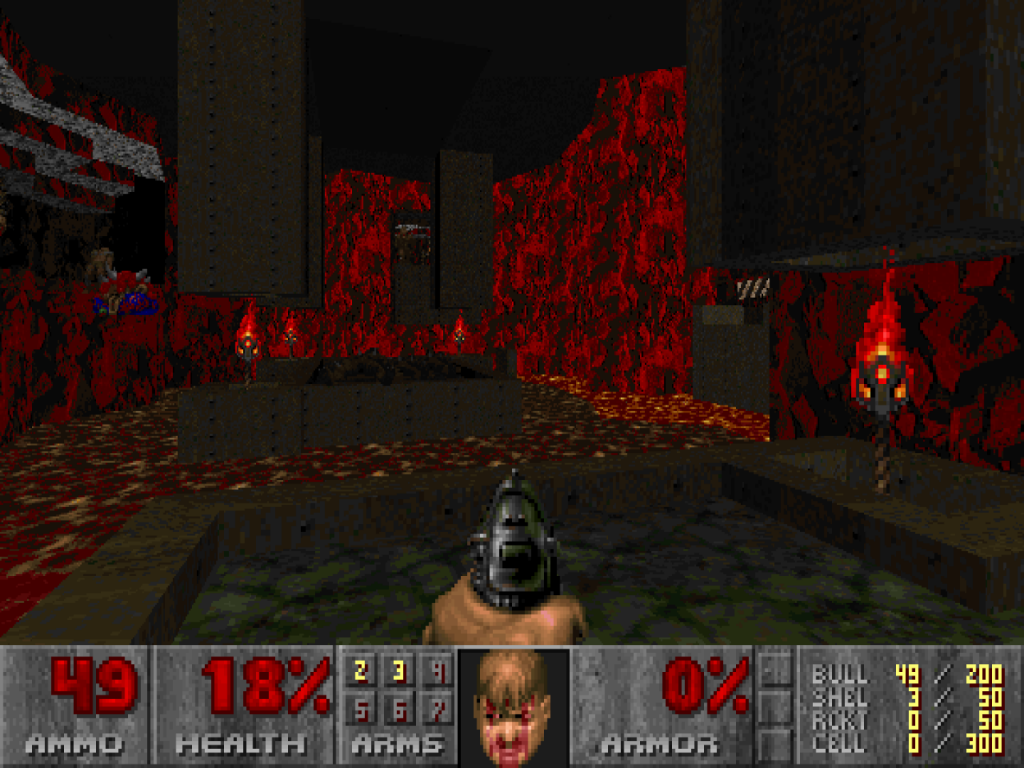 Pictured: One scrub (yours truly), pre-tenderized.

Abbadon’s Void (E5M5) hits us with the sound of a cyberdemon right out of the starting gate, and we don’t clearly see it, but we know it’s aware of us and it’s pissed off. Great. More indoorsy, wood-paneled infernal décor, peppered with monster closet ambushes and tense high-wire acts. I particularly enjoy the MIDI OST track for this map (more on the music below); it’s atmospheric and rich and it reminds me a little of Blood’s great theatrical-style music. E5M6, Unspeakable Persecution, has the exit to the secret level E5M9 (Realm of Iblis). I’m not going to spoil where the door is or what the secret level is like; if you want that shit you can find it easily online. (I admit that I had to look it up. My skills have gotten mad rusty.) I will say that E5M9 is as hot and nasty as you’d expect Sigil’s secret map to be. Buckle up, buttercup. E5M7 is the Nightmare Underworld, and it was originally meant to be the fifth map, but it belongs here in spot #7. It is an expansive and adventurous map, and it pounds me into hamburger at an embarrassing rate. John’s work in Sigil is the work of a man who intimately understands the tools he is using to engage the player. It is the work of a methodical, gifted, calculating psychopath. E5M8, Halls of Perdition, presents the final obstacle in Sigil. Like E4M8, it is not just a straight boss fight; you must find your way through one last intense firefight against the full host of DOOM’s baddies intent on beating you down. The finale has a marathon-like feel and is almost joyful (I only beat it once using equipment cheats on Hurt Me Plenty).

decino’s entertaining and thorough playthrough of Sigil. He is a much better player than me. Props. 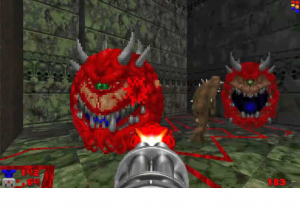 Let’s talk about the absolute fucking banger soundtrack. If you don’t know who Buckethead is, you should, and he wrote the CD soundtrack for Sigil. Apparently, he’s a long-time DOOM fan. Who’d have thought a dude like the immortal Buckethead would have good taste. It is busy, atmospheric, haunting, and it fits Sigil’s gloomy theme of desperation perfectly. The episode also features a fantastic MIDI soundtrack written by James Paddock. It’s a little more action-themed but fits the game every bit as well as the Buckethead score. E5M1 and E5M7 stand out to me as highlights, and you should have a listen.

Ol’ Johnny R. goes hard in the paint with Sigil, reminding us longtime Space Marines that while our blood may smear every hallway and elevator from Phobos to Mt. Erebus, we can never die. Besides, who the hell else is going to keep the demons down? You know they’ll just be back . They always come back.

Sigil gets a 9 out of 10 from me. It’s difficult, but that’s not a complaint at all. It’s a brutally refreshing shot in the arm for a game that’s been loved for over twenty-six years. Devastatingly crisp, well-executed, and effective. John Romero has given us more to love about DOOM… and a new way to get our asses kicked and GET GOOD.

See you later for more articles in October. Stay spooky as hell… and Stay Retro.

BONUS: Of course there’s a Zero Master speed run of 9:32 for it already. Hallelujah.