Image Comic's The Weatherman combines great storytelling, killer visuals, and a synthwave-inspired aesthetic to be one of the most exciting comics of 2018. And as if that weren't enough, the series boasts an outstanding soundtrack with staples of the scene like Lazerhawk, Power Glove, and Betamaxx. NewRetroWave's

Image Comic’s The Weatherman combines great storytelling, killer visuals, and a synthwave-inspired aesthetic to be one of the most exciting comics of 2018. And as if that weren’t enough, the series boasts an outstanding soundtrack with staples of the scene like Lazerhawk, Power Glove, and Betamaxx. NewRetroWave’s Comic Book Editor Joey Edsall had the chance to interview writer Jody LeHeup, creator of The Weatherman, to get more insight into the series and the connection it has with the synthwave scene.  Vol. 1 of The Weatherman is available now, and Vol. 2 starts in June.

JE: The Weatherman has one of the best conceptual hooks I’ve read in years, that of a weatherman amnesiac on Mars being accused of wiping out the most of the population of Earth. Would you mind telling us how this comic came about?

JL: Where ideas come from is always a difficult question to answer. At least for me because there are so many pieces that pull from so many places. But years ago I was first starting to write and I was working on these kind of crime fiction short stories and I had this idea about a weatherman that was all smiles and finger guns on camera but then off camera was suffering in some way. I never really figured it out though and I put it down and went on about my life. I went on to become an editor in comics where I had to work on million projects at once–many with different tones and playing with different genre elements. So when it came time to go back to the writing desk my brain was just buzzing with ideas. I rediscovered this kernel of a weatherman character, started to build, and here we are. Soon this little crime fiction idea was this massive and totally wild science fiction epic where I get to play with genre fiction. And also work through some trauma in my past so there’s a very real emotional attachment to this story for me.

JE: Total Recall seems to be in the DNA of the series with both the terraformed Mars setting and the amnesiac protagonist. But where Verhoeven seemed concerned with a grimey and sleazy aesthetic, The Weatherman has a real depth to its characters and world that it’s easy to imagine it existing even when you finish an issue. Was there a conscious choice to incorporate inspiration from that film while also distancing the comic from it?

JL: No, not at all. WM is similar to Total Recall in that Mars is involved (though our version is completely different) and our protagonist has memory problems (though we’re going to a completely different place with it) but the similarities end there. WM is very much its own thing. Having said that there are definitely some influences from Verhoeven in terms of tone. Like him, we’re big fans of over-the-top violence and social satire. 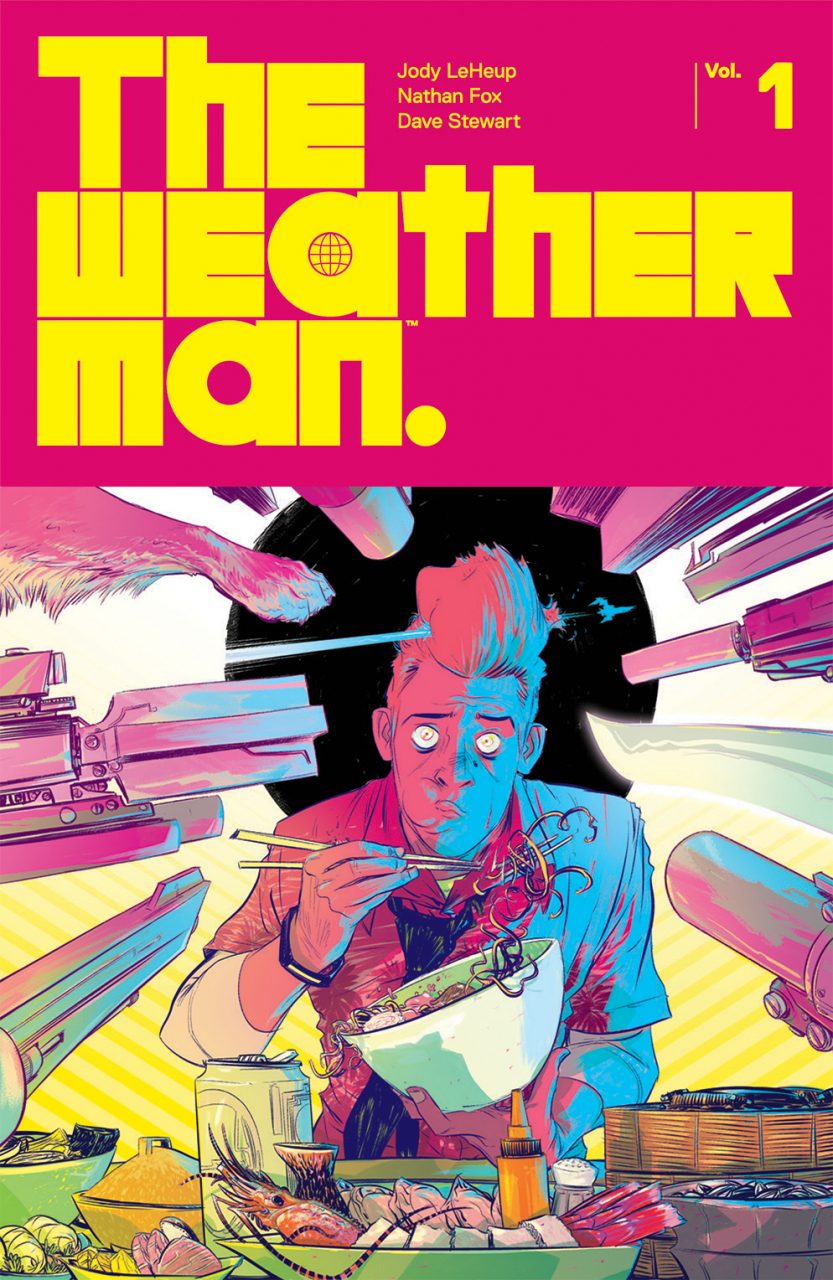 JE: Nathan Fox’s artwork throughout the first six issues has been incredible. What has it been like to work with him on the series?

JL: It’s an absolute dream. For my money, Nathan’s one of the best artists of his generation. He’s a true genius not just with illustration but…storytelling, world building, character development, acting, big moments, small moments… There isn’t anything he can’t do and at the highest level. I really couldn’t ask for a better co-creator, artist collaborator, and friend. I’m the luckiest writer in comics as far as I’m concerned.

JE: As I mentioned earlier, your characterization and world building are some of the best aspects of The Weatherman. Did you come up with Nathan Bright first or the world he inhabits?

JL: The Nathan Bright character came first and then we built the world and characters around him.

JE: The soundtrack for The Weatherman is filled with heavy hitters from the synthwave scene each with stand out tracks. There isn’t much crossover between the worlds of music and comics, at least not in this capacity. How did that come about?

JL: Nathan Fox, Tom Muller (our brilliant designer), and I are all big fans of music in general and synthwave specifically. I often listen to it when I write. In fact much of WM Vol. 1 was written to music from the bands featured on our soundtrack. And bands like them. The pulp sci-fi and 80’s cinematic vibe puts me in my happy place…back in the R-rated, practical special effects days…and I’m able to focus better. There’s a lot of energy to it. I also like how synthwave sort embraces both the serious aspects of genre but the not-so-serious sides as well. It’s able to laugh at itself at times which is fun. We do the same thing with THE WEATHERMAN. There’s obviously some deadly serious moments in our book but it’s funny in spots as well.

As far as how our collaboration with synthwave bands came about…it all started with MAGIC SWORD. I knew just from being a fan that MS was into comics because they make their own based on the band’s music. (It’s fantastic by the way. Check it out on their website.) So on a whim I decided to reach out and see if they’d be up for collaborating. Fortunately they responded and I was able to get a foot in the door long enough to explain what we were doing and how the collaboration could work in a way that benefited everyone. Once they heard what we had planned and took a look at the book they were in. And we just went from there. MS helped us get in contact with the other bands and we worked it out. Now THE WEATHERMAN has an original synthwave soundtrack from some of the best to ever do it including MAGIC SWORD, MAKEUP & VANITY SET, POWER GLOVE, OGRE, BETAMAXX, LAZERHAWK, and LE MATOS. It’s amazing. 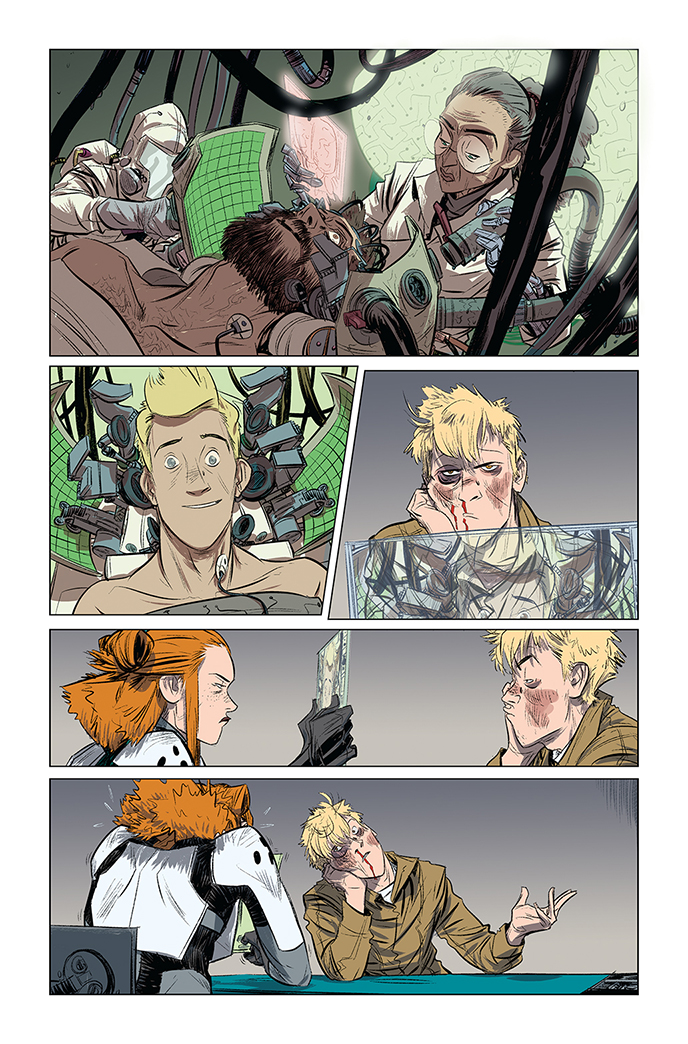 JE: Lazerhawk’s contribution to the soundtrack, “Sword of God”, has a real paranoid energy to it, which seems fitting considering it is named after the shadowy group that seem to be the series’ primary antagonists. Will the next volume of the comic explore the group more?

JL: I won’t get into when and where we’ll next see the Sword of God but I will say that they play a major role in the series. We’ll see them again for sure. And even when they aren’t on camera, they have a way of making their presence felt.

And yeah, Lazerhawk did a fantastic job with his track. Everyone did. And they’re all big fans of the book.

JE: Do you plan on releasing another soundtrack for the next volume of the comic?

JL: We’d love to. We had a blast doing it for Vol. 1. If any bands out there are interested hit us up at theweathermancomic@gmail.com. I know some of the folks from Vol. 1 are up for returning as well. 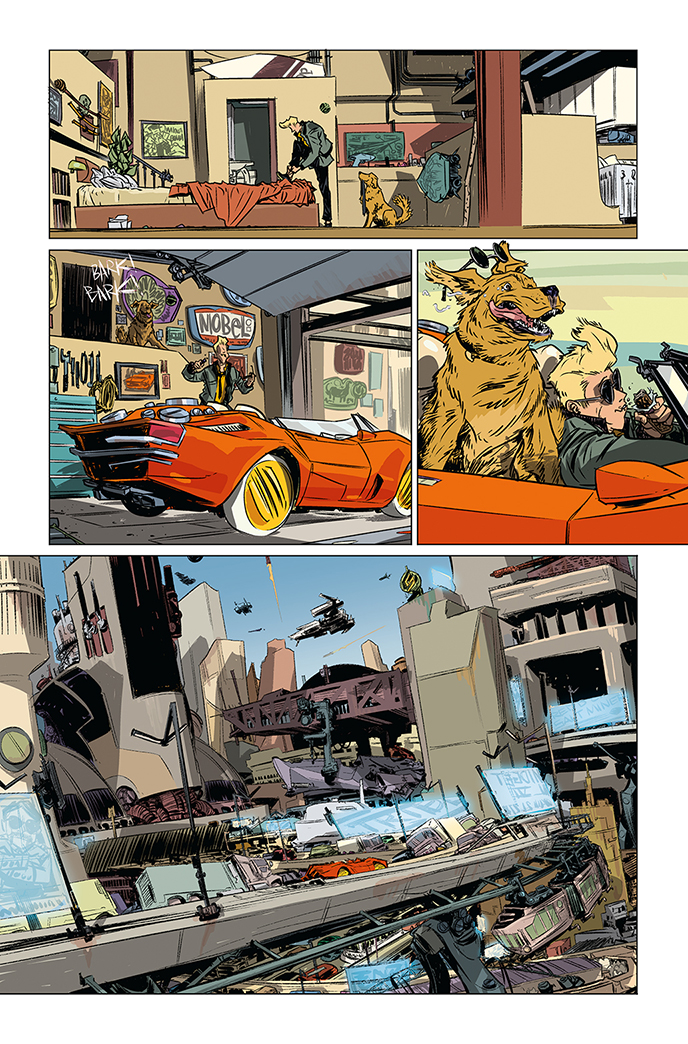 JE: As far as coloring goes, Dave Stewart contributes a lot to the unique feel of the comic. The range of colors used seems very wide, and yet nothing seems haphazard or clashing. What has it been like working with him?

JL: Dave Stewart’s pretty much a legend at this point. Every artist in the industry wants to be colored by Dave because he’s just such a pro. And as you point out his palette choices are pitch perfect. He has a way of picking the exact right tones for any given scene so everything is balanced and beautiful to look at. One misstep and it could end up a complicated mess with elements being hard to parse out. But Dave is a master at his craft so that’s never an issue. So it’s been a dream to work with him as well.

Really though, it’s like that with the whole team. That’s what makes working on this book so special. I might go my whole life and never work with this many talented folks again. Vol. 2 colorist Moreno Dinisio, our letterer Steve Wands, designer Tom Muller, editors Josh Johns and Sebastian Girner, all of our cover artists…they’re all stone-cold elite ninja assassin comics badasses. You couldn’t create a better team in a lab. They’re the best in comics full stop. I feel the same way about our music collaborators.

JE: What are some of the movies, TV shows, or music that inspired you while creating this comic?

JL: So many influences. Too many to name them all for sure but Nathan Fox and I are huge fans of anime like Shinichirō Watanabe’s COWBOY BEBOP and SPACE DANDY and Takeshi Koike’s REDLINE.

I also love smart TV dramas like BETTER CALL SAUL, BREAKING BAD, and MADMEN. Those have less influence in terms of genre but the quality of writing in shows like that is inspiring.

Music-wise aside from synthwave I listen to a lot of metal and punk. Queen. Also hip-hop and post-rock. But that’s just in general. 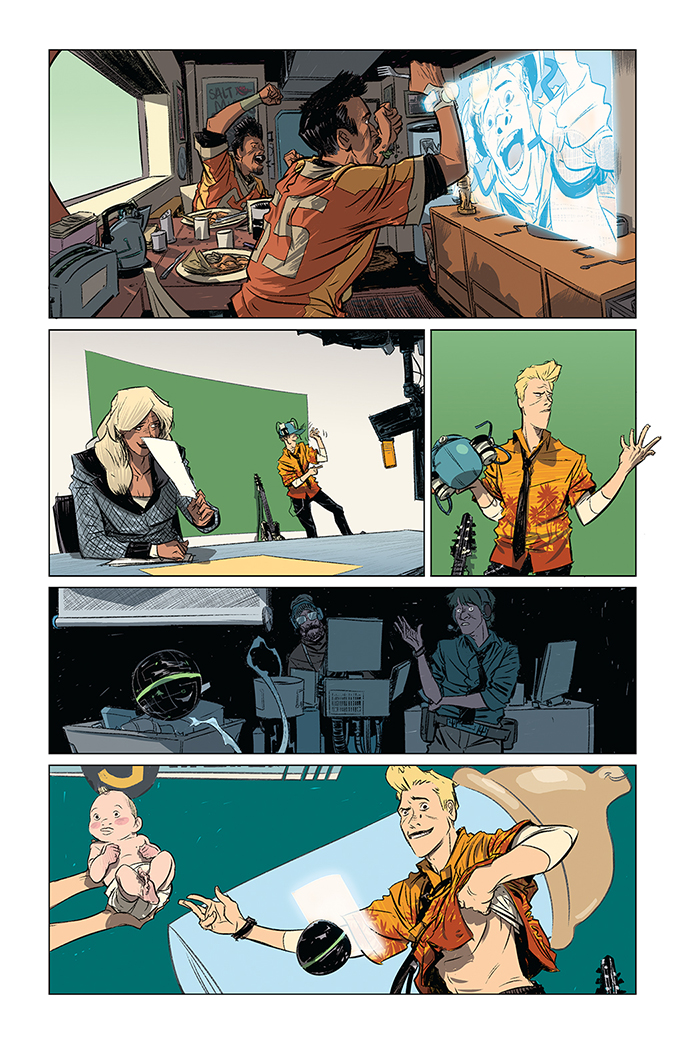 JE: Are there any final thoughts you would like our readers to know?

JL: THE WEATHERMAN Vol. 1 collection is on sale now and we’re hard at work on THE WEATHERMAN Vol. 2 which is somehow even bigger and more insane than Vol. 1. That’s out this June but you can pre-order issue #1 at your local comic shop now. Pre-Orders help in a major way so if you’re interested in checking out the book let your local retailer know today. For the readers and retailers that have supported our book so far. THANK YOU.

Also check out our collaboration with the synthwave legends mentioned above on Soundcloud. And listen to the rest of their music! It’s amazing!

See you in June!