To top off a lazy Sunday afternoon, I bring you the third installment of gems from the Genesis. Did you know that a total of 897 titles are known to have been released for the Mega Drive/Genesis from 1988 to 1997? During that time, Sega 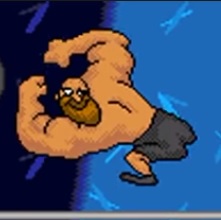 To top off a lazy Sunday afternoon, I bring you the third installment of gems from the Genesis. Did you know that a total of 897 titles are known to have been released for the Mega Drive/Genesis from 1988 to 1997? During that time, Sega sold 30,750,000 (rounded) units of the 16-bit console worldwide. We’ve examined six of these cartridges so far, and it’s time for what you came for: not me blabbering, but the last three reviews.

Yes, it’s Fist of the North Star. Or at least it’s set in that reality with you as the cranium-popping protagonist. American localization changes his name to Aarzak… what the fuck. Like, why even bother? Just leave it alone. (UPDATE: Apparently the NA version was not licensed under the IP for some reason.) You punch and kick your way across a wasteland map, engaging in arena fights, wild brawls, and deadly mazes. I can’t begin to decipher the “best ending” for the game, but I know it has multiple “chapters,” and I also know that I get my ass handed to me in every arena fight. Sometimes allies find you and have a little gift for you; this, like many events in the game, seem arbitrary or random. Senseless, even. 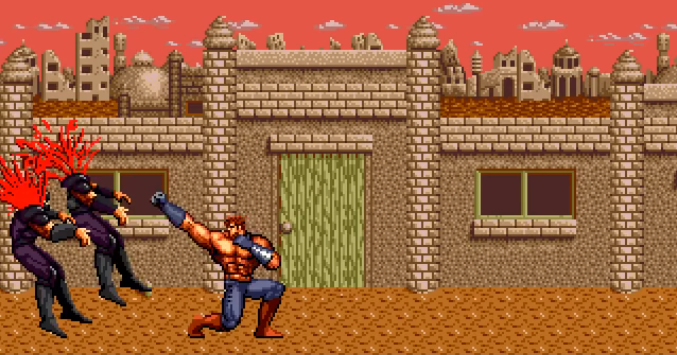 Post-Modern Interpretive Dance at its Finest.

Your punches can explode motherfuckers, as one would expect. They can also deflect projectiles. Your kick is no joke, either. The post-apocalyptic nightmare world is full of marauding hockey mask men, crust punks, amateur body builders, etc. just waiting to get in your path so you can tell them they’re already dead.

The graphics are pretty nice, with some parallax and great detail on backgrounds as well as the pretty high quality spritework. Most of the characters don’t suck or look awful. Hokuto no Ken’s soundtrack is underrated, and displays a high level of well-executed complexity one can easily miss for the one thing I hold against this game. That is, it’s repetitive as hell (which means it eventually gets tedious). I give Hokuto no Ken a 6 out of 10. I like the effort, and for what it is, it’s really polished and detailed.

I love a good medieval fantasy. I’m not even terribly picky. I’ll still play those old SSI D&D games when I need my fix. I’ve seen a lot of “adventure” games come and go. The Dark Castle port for the Mega Drive has to be one of the most unfortunate things that ever happened to unwary players.

As Prince Duncan, you have to navigate the Black Knight’s castle to topple him from his throne. Seeing as you’re a wealthy and powerful prince, you’ve decided to arm yourself with… some fucking rocks. I’m sure there’s some philosophical statement or Biblical allegory here, but I’m pretty sure even the Disciples would agree: clumsily aimed rocks are a poor weapon against literally everything. The prince runs and jumps (badly), ducks (slowly), and makes sure to pick up more fucking rocks when he finds them. 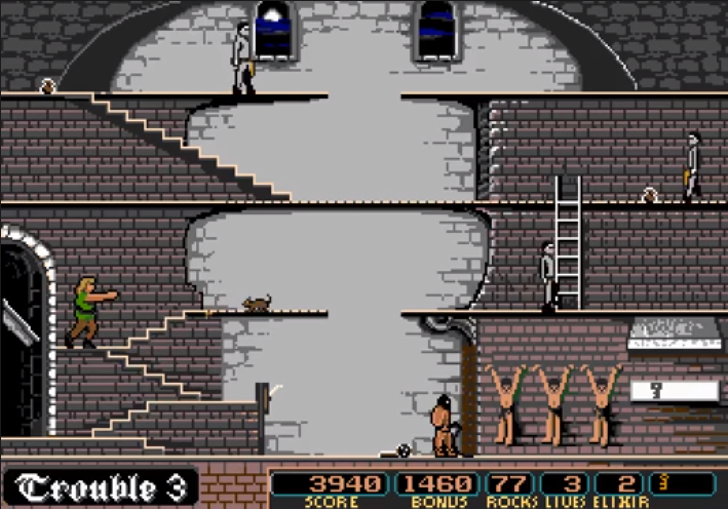 Yeah, I see a whole lotta fuckin’ trouble all right.

This wasn’t a fantastic game when it was on the Mac or C64. It looks like lazy MS Paint, and I’d even say it looks rushed. Like no one gave a shit. The sound is abysmal, and perhaps the greatest affront is that a strangled MIDI rendition of JS Bach’s “Toccata and Fugue in D Minor” loops nonstop.

I love that piece of music. I am a huge fan of the classical organ and people so often overlook the bulk of the piece, focusing only on the first few measures it’s famous for. But now I can’t listen to it on the organ for at least a week. I give Dark Castle 2 out of 10. Disgusting.

This was one of my favorite ones growing up, for two reasons: I loved Ren & Stimpy; and it was short. I’ve always valued a game I don’t have to sit and play for 4 hours, and this one’s a masterpiece. John K.’s cat & dog duo in their own Genesis game… and it doesn’t suck like you expect so much of the licensed games for the MD to suck.

1 or 2 players (simultaneously) must navigate strange and “exotic” locales as the boys look for the pieces of Stimpy’s Mutate-o-Matic, an invention that turns household garbage into food. The game is full of entertaining enemies and challenges, and Ren & Stimpy have to work as a team, executing team-up moves when certain button combos are pressed when close to each other. The game gets a little harder as it goes on, but for the most part it’s a madcap war of attrition. 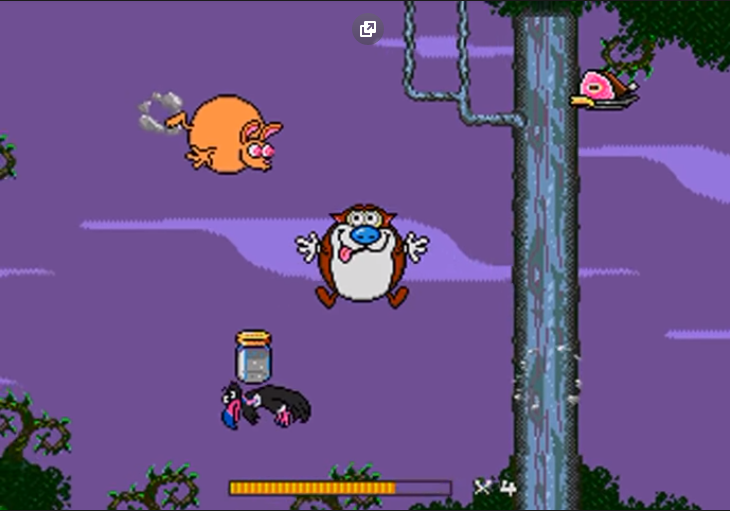 Tooting around the aviary at the zoo.

The graphics are good-quality Sega graphics, with lots of animation really taking advantage. The sound is exceptionally good, even including some not-too-sloppy digitized voices from the show. The music is pretty snazzy in some places, especially the zoo and the pound. I give Ren & Stimpy 8 out of 10. It’s a lot of fun to play 2 players, it’s got me by the nostalgia, and it’s still fun.

April holds even more retro gaming goodness in store. See you then!