Here I am once again, sliding headfirst into home to meet monthly deadlines, with a big goofy smile on my face and five more game boxes that raise more questions than they answer. There are just so fun to do that it's hard not to 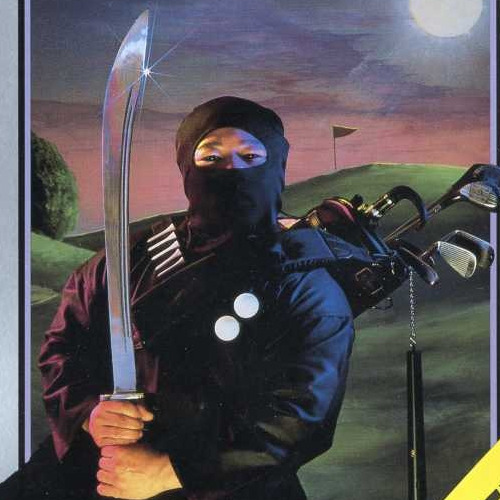 Here I am once again, sliding headfirst into home to meet monthly deadlines, with a big goofy smile on my face and five more game boxes that raise more questions than they answer. There are just so fun to do that it’s hard not to write them back to back, but after this one I pinkie-swear I’ll deliver something else. It’s gotten to the point where all I have to do is leave Twitter open and casually browse Tumblr, and it reminds me very much of lazily floating a line in a well-stocked fish pond. Nonetheless, I’ve kept it down to five, as usual. Bon apetit, my fellow gourmands of the absurd. 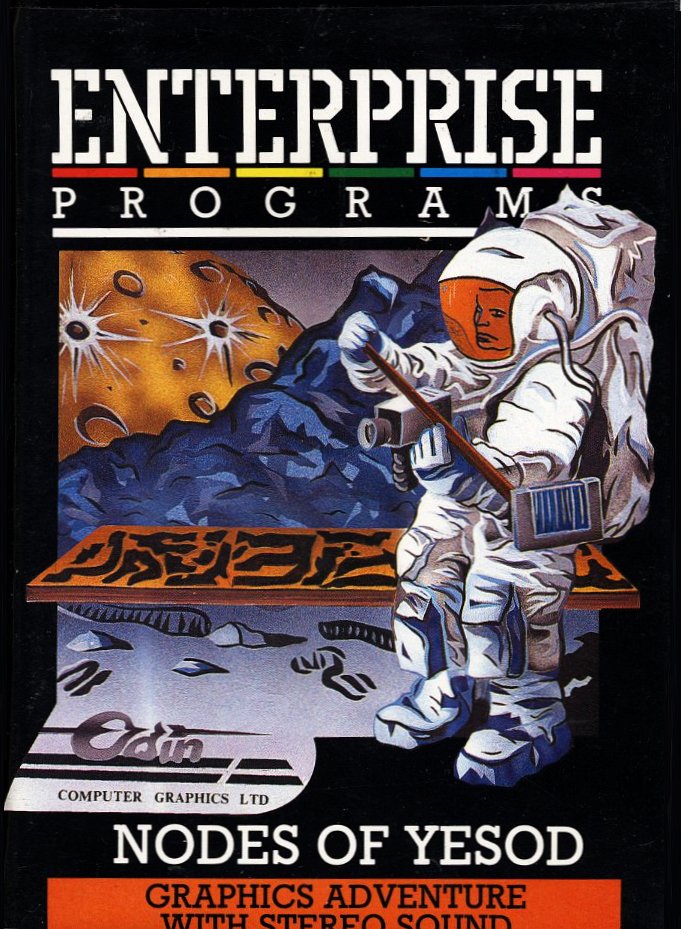 Let me start off by saying two things. First, “Odin” is a good name for anything. I shouldn’t have to explain why. Beats me why anyone would be too lame to get it. Second, this game was published for a computer called the Enterprise 128, and I know nary a damn thing about it. In fact, this game box is the first evidence I’ve seen that the system ever existed.

I’m guessing the massive, otherworldly floating bronze table is a Node, because I don’t know what the hell else it’d be, just floating around on some dusty-ass moon. You can tell that the novelty of nodes, and even the wonder of outer space, long ago ran sour for our astronaut here. His space suit looks like it was cobbled together using terrycloth towels and those soft lunchboxes that are supposed to keep food hot but instead just make it easier to ruin between point A and B. In his fat, vinyl-thick hand, he holds the pinnacle of space age innovation: a Super 8 camera.

Back in 1985, they had to clarify on the box whether or not it was a “graphics adventure.” It even has stereo sound. Nodes of Yesod wasn’t just any Normal Joe computer program. This was some high-fallootin’ boutique-level entertainment. 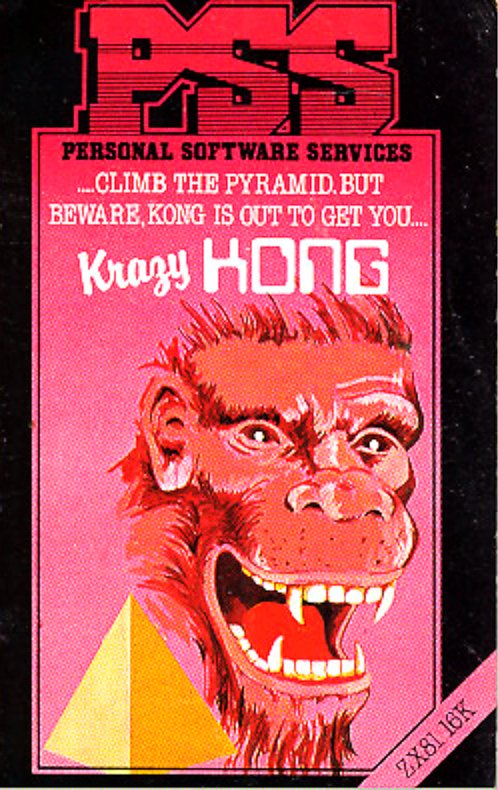 That’s about all. I’ve seen it mentioned in the occasional article or other source. I never bothered to learn more. To be fair, 90% of my personal time consists of playing D&D on Roll20, watching low-budget horror and sci fi films, and sleeping.

Whether or not you’ve heard of the ZX81, Krazy Kong has heard of you. In his dreams. The ones where he’s eating you. What unnerves me even more than his bright red face and his ability to astral project just his head? The fact that he’s out to get you… and looks fucking JAZZED about it. Dude packed a cooler and everything. He lives for this shit. One must wonder what attachment, sentimental or contractual, a leering red ape might have to the might and ancient Pyramid, but Krazy Kong does not look like the kind of cat I’d be asking a ton of questions. You’re probably lucky if you can get a head start.

Wait. Wait. It also bothers me – as well as standing in affront to nature and science – that Krazy Kong has a very human nose and four daggerlike Dracula fangs. Planning an exciting getaway to Egypt this year? I say skip it. 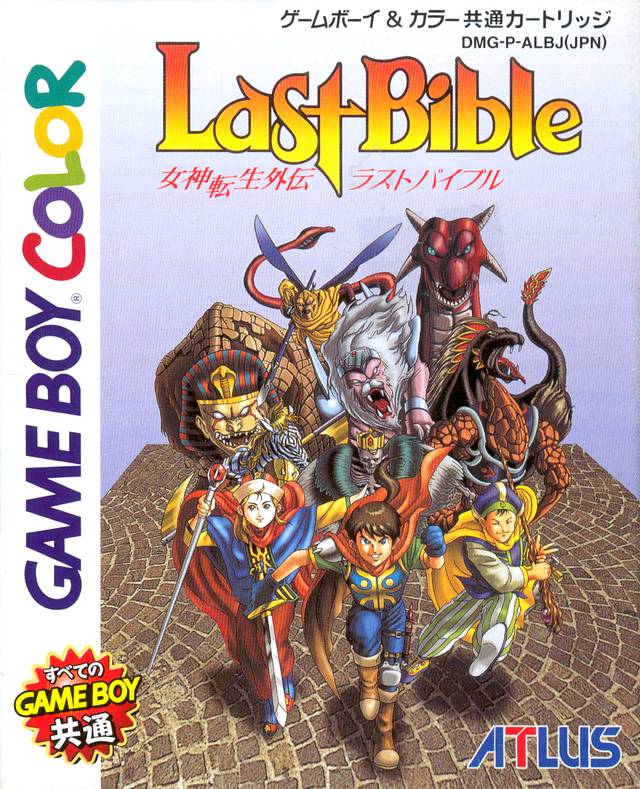 I am aware that this is a way more recent game than we usually talk about here, but I don’t give a shit because Megami Tensei is a long-running and pitifully undersung series. Oh yeah, and let me give a shout: Zayd, Ben, Zach, Colin, Nick, and Jonah… this is for you. I love you guys even though you’re hopeless anime nerds.

Much like the Final Fantasy series eternally promises in its titles that this is definitely the final one (but it isn’t because you FF fans love this shit and would probably buy a toaster if we branded it with Cloud’s smirking face), this game makes reference to something called the “Last Bible.” I am not a theologist, nor was I ever much for the academic end of religion, but I’m reasonably sure there’s just one Bible. I mean, there’s the Book of Mormon, the Catholic Apocrypha, and a handful of other peripheral tomes… but I don’t think they published a “Bible 2.” I’m willing to bet that most of the Apostles had enough excitement seeing the first one through.

Apparently in the Last Bible, Christ is notably absent. He has been rotated out in favor of three kids who have some really fucking weird homies. It may just be a splash representation of both the characters and the monsters, but this stone cold convinces me that these folks, human or not, represent one crew. Here’s my imagination’s breakdown of the posse, member by member: 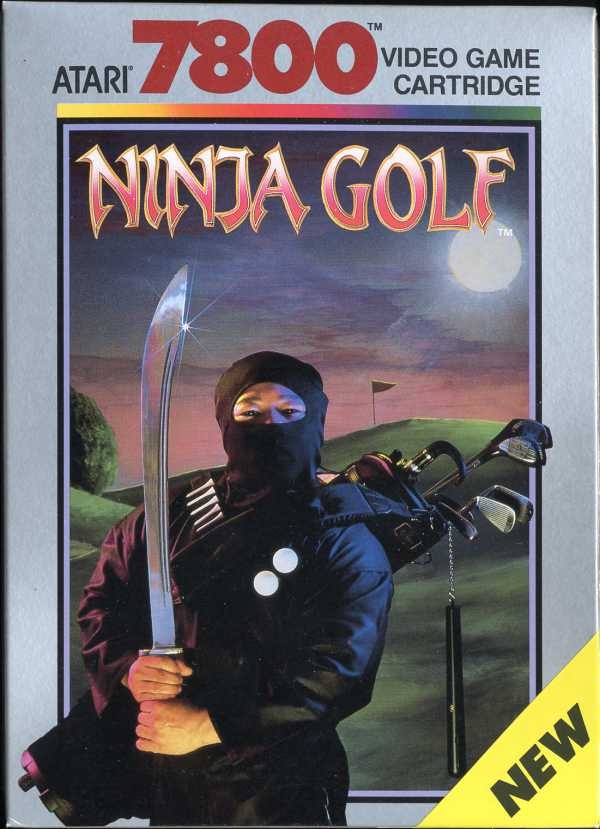 “Look, we needed a guaranteed-minimum walk-in sale, and if you put ninjas in anything, it’s pretty much gonna get bought by some people.”

I immediately recall the scene in the film Ninja III: the Domination where several well-trained shinobi killers throw down and let some blood soak the fairways. This box art is kind of a letdown, though. I can forgive it being a tad plain – I mean, you design a package, get the job done, and go home – but what really bothers me? That isn’t even a Japanese sword, yo. That’s a Chinese K.F. Broadsword.

You should also be more careful stowing your nunchaku. Night play can be a harrowing uphill battle, and losing a good pair of chucks could ruin your round. Not to mention the dubious function and comfort of tabi boots with cleats on the bottom. 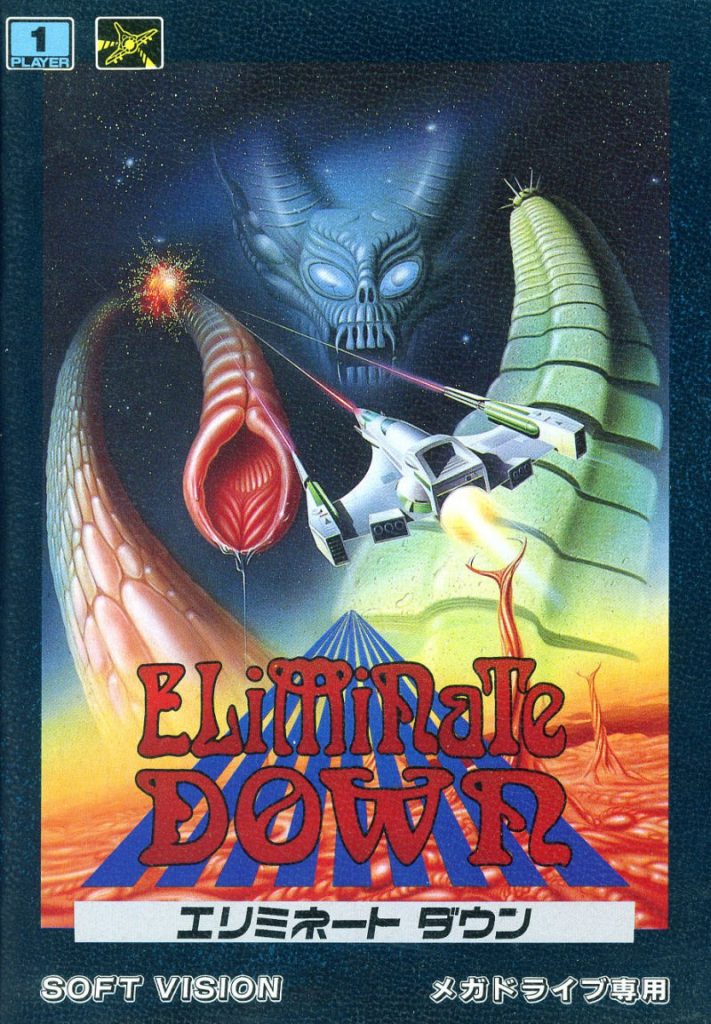 This is fucking stomach-churning. That is a deliberate and carefully-rendered Butthole Worm. A colossal butthole worm, flailing its guts-body around as it gets rocked by laser fire and letting… whatever that is ooze out of its suggestive aperture. Even the screaming piano-toothed alien seems a little shocked. Maybe a little embarrassed. “It’s… not mine. I don’t know… it just… I found it in here.”

The towering articulated cactus-arcology seems tame in comparison. I fail to see how that loveable oaf could hurt a fly. He’s perfectly content swaying in the thermals, passively ingesting space-plankton, and thinking about what having limbs would be like.

He was pretty comfy until Anus-Wyrm busted on the scene with his gaping orifice and his Astroglide drool problem. There goes the magma-ocean. 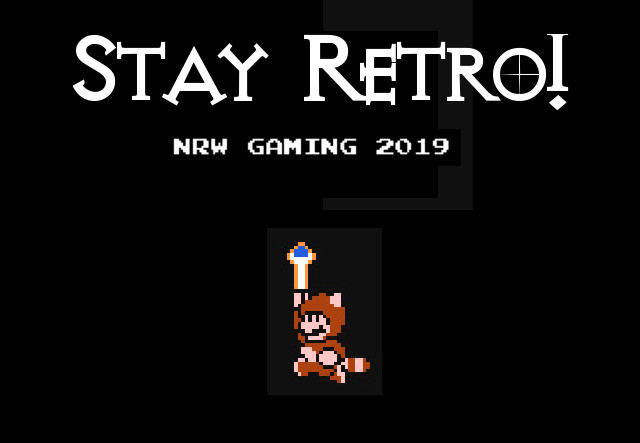 In February, I make this Good Boy Promise to you, my readers: I will write three articles, and exactly zero of them will be box art. Stay Retro, and as the Great One once said, “be like water, my friends.”