Scandroid has always had a flair for the dramatic. The Darkness and the Light is, in itself, an operatic undertaking. It will consist of two EPs released over the span of a few months that operate as companion works. Scandroid adds his flair to the 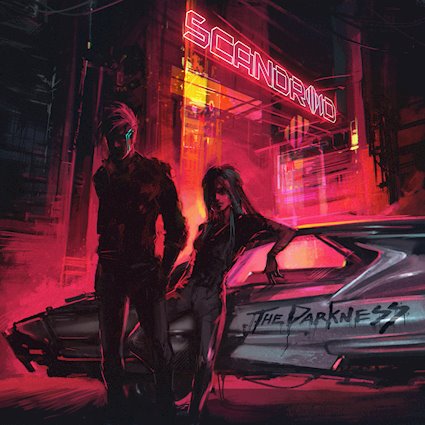 Scandroid has always had a flair for the dramatic. The Darkness and the Light is, in itself, an operatic undertaking. It will consist of two EPs released over the span of a few months that operate as companion works. Scandroid adds his flair to the first of the two releases, The Darkness, due to be released on December 4, 2018. If you liked previous Scandroid releases, this will be your favorite. As strong as they are, The Darkness takes everything that made the Scandroid debut special but infuses it with better production values and a more focused mood.

While “Phoenix”, the second track, is probably the most in-your-face track of the album, it’s metal riffing intro is a treat that suits the sincerity that Scandroids imbues into lyrics that could easily fall into camp territory. It’s on the third track that The Darkness hits its zenith. “The End of Time” is, in no uncertain terms, an absolute banger. It’s a fast-paced track with a pulsing groove at its core. Klayton’s vocal performance here is at his best, fluctuating between menacing lows and catchy highs. In terms of vocals and synths, this is the catchiest track offered here. It interrupts its own hypnotic groove with tom fills and an interesting shift mid-song. Scandroid mastermind Klayton’s experience in pretty much every electronic sub-genre is on full display here as it approaches dubstep and krautrock territory. It’s in Scandroid’s absolute mastery of style mixing that he shines.

“Out of the Darkness”, the final (kind of) track, is the second best offering here. It builds tension effectively in its opening bars. It’s opening drums are strange enough to keep listeners off-kilter before more of the song reveals itself. It ramps up the tension and sense of dread appropriate given the title of the EP. Instead of this leading to a drop, it turns those sounds into something more hypnotic. The end of the track leads smoothly into the four remixes that close out The Darkness, creating a cool effect of disorienting listeners before reeling them in with something more recognizable.

As with Scandroid’s previous release, if you don’t like vocal synthwave, this isn’t for you. Likewise, if you are not a fan of music that is highly narrative in nature. This is synthwave prog, and it’s more upfront about that than most. If that sounds like your jam, then The Darkness is going to give you a non-stop wild ride. Scandroid is at his catchiest here, with his pop sensibilities shining through even the most menacing of synths. Throwing the vocals through a multitude of effects help integrate the vocals to the world that the EP creates. And that sense of atmosphere is so strong that it’s going to be hard to wait until The Light drops in 2019.

From a review standpoint, this is focused primarily on the original tracks of The Darkness. Though this release includes six songs that contribute to the overall The Darkness and the Light project, the album also boasts four remixes full of pulsing synth goodness for your retro-lovin’ ears. You can stream and pre-order The Darkness here.