In a time beyond time, when the grit and stone of our video gaming foundations was still somewhat molten and mutable, there were games whose footsteps left a fossilized and indelible mark on the tone of things to come. In these earlier days, it was 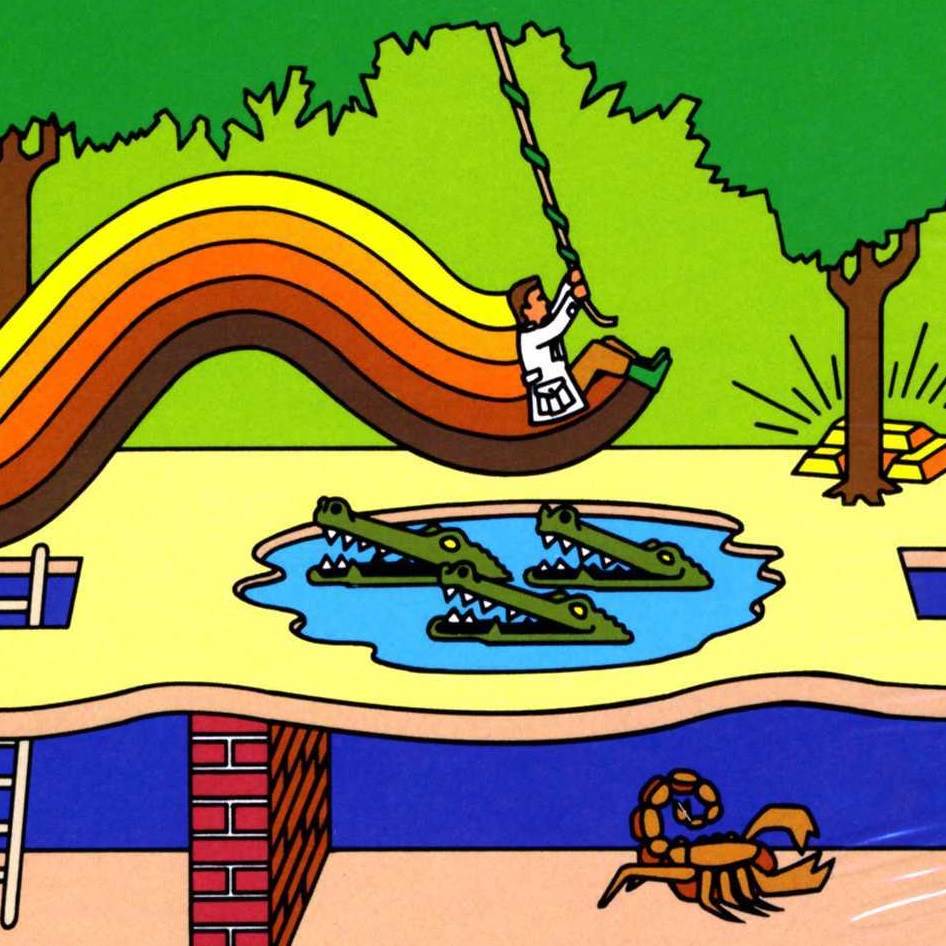 In a time beyond time, when the grit and stone of our video gaming foundations was still somewhat molten and mutable, there were games whose footsteps left a fossilized and indelible mark on the tone of things to come. In these earlier days, it was perhaps uncertain what the future of gaming would be, but these titles offered some credence to the idea that an ongoing saga was not only possible, but likely.

I’m talking about “true classics.” While not the earliest examples of their type, these games – ones that existed within the cycle of arcade, 2600, ColecoVision, and other formats – are certainly the earliest “household names” commonly summoned up from the sediment of our collective long term memory. They’re less often examined nowadays because they appear so rudimentary to your average person, but their worth has not changed. This is some serious, actual oldschool shit, and it’s time for the whippersnappers to sit up straight and start taking notes. We’re gonna do a grab bag on the solid gold oldies.

NOTE: In this article, since I’m talking about games that were released when video gaming was still in its formative (even primitive) stage, I won’t spend much time talking about graphics or sound. It’s a safe assumption that these aspects will be very basic in any game from the era, but if one of them is exemplary for its time in a particular case, I’ll mention it.

Part of what I really like about Pitfall is that it’s not only a great game, it was part of Activision basically saying “fuck you” to Atari for assuming it’d established some kind of imperial monopoly on

game development. Activision grabbed talent from Atari and other sources over time by offering game designers something Atari absolutely refused to: credit for their work. Eventually, the popularity of the titles developed at Activision pressured Atari to start licensing them. A victory against the Eternal Asshole. Hallelujah.

Anyway, Pitfall gives you control of a dude named Harry, and you have 20 minutes to navigate a decidedly unfriendly environment in order to get some sick loot. The game itself is a very early example of an action platformer, and it even gently tugs on the RPG line, at least in my view. At the very least, it’s got one of the common tropes of that genre: you’re risking your entire ass to poke through a terrible place to find something of value.

The action is pretty damn knuckle-biting for its time, and is one of the reasons Pitfall is considered a classic. There is a constant level of tension and sometimes your decisions boil down to “which horrible risk do I want to take?” High adventure at its finest. My personal favorite is the crocodiles. I love how harry just kind of disappears vertically into them, into some pocket dimension in their lower jaw or something. Regardless of that, Pitfall is a lot of fun to play on any of the systems it was licensed for, and proof that a game with a simple premise and good design is timelessly and universally worthwhile.

the egg’s not even that into this. Peer pressure at its worst. That pickle though… it’s pissed. It’s really decided to put everything into this conflict. IT WON’T HEAL THE WOUNDS INSIDE PICKLE

It is known to a few sages of the obscure and the forgotten that the word “BurgerTime,” in the language of the Ancients who sailed across the great astral sea of space to seed our world with the components necessary for abiogenesis and new life, means something akin to “Thunderdome.”

In other words, You don’t just exit BurgerTime. You have to fucking fight your way out. 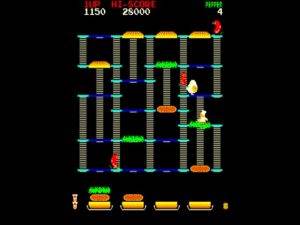 They can smell your fear. Your fear, and the alluring aroma of sizzling ground beef.

In another simple premise typical of the era, in BurgerTime you are a dude named Peter Pepper who has one job to do: knock some fucking burgers together so you can clock out. The problem is, there are anthropomorphic eggs, hot dogs, and pickles all over your burger scaffold doing their best to stop you from achieving your burger-stack goals. Whatever their problem is, they’ve apparently decided that Peter’s the cause. Fortunately, you can fight back by using pepper not unlike pepper spray, as well as smashing the bad guys under a falling burger part or getting them to stand on it just as you make it drop. Not terribly clever are these rogue ingredients, despite their lust for your blood. The game gets harder as you go, requiring more burgers per stage and throwing more pissed off eggs and pickles into the mix.

I have been an enthusiastic fan of this game for a longer time than a lot of other games that came out before I was born, mostly because I have fond memories of playing it on a beat-up cabinet at a local pizzeria during my childhood. More importantly, it stands alongside Circus Charlie as a video game that reinforces an important concept: conflict, despite its unpleasant nature and ultimately harmful effects, is a perpetual and omnipresent phenomenon. There can never truly be total peace.

Not while those pickles and eggs have a fuckin’ attitude, anyway.

Gottleib’s most successful title, Q*bert is one of those early arcade games that became a readily recognizable property readily seen as a symbol of the video game.” I even remember the younger of my two older sisters, who didn’t give half a shit about video games at all, having a Q*bert button on her backpack in high school. While the little snoot-dude doesn’t even remotely approach Mario or Pac Man in terms of being a household name, during the early 80s he made quite a name for himself. That’s because his game is actually pretty novel for its time, not to mention fairly fun to play. 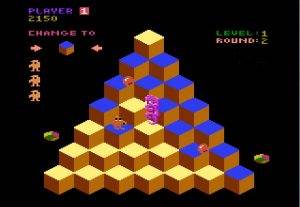 Already all kinds of fucked.

As Q*bert, you’re trying to jump all over a set of isometrically drawn cubes, changing the color of them when you land on them. This sounds like a pretty easy thing to pull off, until you consider that snakes, monsters, and all kinds of shit are chasing you around while you do this, trying to preserve what I guess they see as the cube color status quo of the iso-pyramid. Shit can get a little heated, especially since the green monsters can change back the cubes you’ve touched. Things can quickly dissolve into bullshit.

Even cooler than any of that, and something I’ve not been able to personally experience in full since I use emulators for most of this, is the level of effort that went into the Q*bert cabinet. Not only was a speech synthesizer used to create the sound Q*bert makes when he gets caught by a bad guy, but pinball components were even included into the machine to create certain sound effects. The digital sound components use 128 bytes of memory to to their job, which is quite a bit for ’82. I personally find this to be the most impressive part of Q*bert, especially since I’m really shitty at the actual game.

Pitfall! – 7/10 (It’s really fun and involved for a game of its time, and if you can appreciate games this old at all, then it’s even exciting.)

BurgerTime – 8/10 (it can be a real motherfucker, but it’s an early example of Data East not shitting the bed with the lights on while designing a game, so I’m very fond of it.)

Q*bert – 7/10 (A lot of innovation took place when this game was unleashed on the world, and it’s faded from prominence a bit, but it’s not to be overlooked.)