I'll start this off the way I like to start as many conversations as possible these days: I have a ton of emulators now, not to mention a handful of working consoles. Every moment I don't spend writing, doing other work, playing D&D, sleeping, reading, 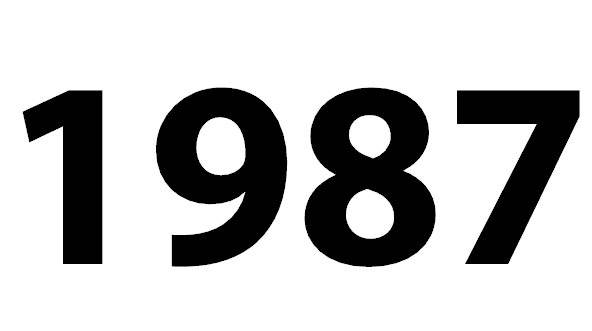 I’ll start this off the way I like to start as many conversations as possible these days: I have a ton of emulators now, not to mention a handful of working consoles. Every moment I don’t spend writing, doing other work, playing D&D, sleeping, reading, or doing gangster shit (read: more sleeping), I tend to spend screwing around with games no newer than the year 1998 or so.

It occurred to me that hadn’t done a “grab bag” style write-up for a while, so I looked over my breadth of selection and got an idea. I could just use a particular year as my theme. Any platform, and genre, any style. Here’s what I’m thinking. Let’s do it up right and have a look at some games that are turning 30 this year. That’s right… get in the DeLorean, because we’re going back to ’87, and we don’t need roads because your ass can sit right there and enjoy the show.

The shoot-em-up remains one of my favorite styles of game, and the 1980s were its formative era. We saw the genre that began with games like Galaga begin to transform, yielding high-octane excitement that progressively offered more and more challenges along with the advancement in gaming technology. R-Type is notable in the history of the shmup not only for being one of Irem’s most successful games, but also for its considerable difficulty and innovative gameplay elements. 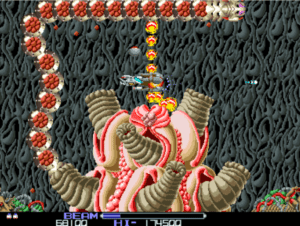 Yo… this is vaginas. You’re not even trying to hide it, Irem. You straight up made a boss monster by stacking up lady-parts.

For real though, this game is fucking HARD. Like a lot of shooters, the focus is on the game itself, not the plot; you’re responsible for saving humanity from an alien menace hellbent on destroying it. This life form is called “the Bydo,” and apparently its preferred method of war is the relentless bullet hell. At least they gave you a badass little ship!

Well, okay… it doesn’t start out badass, but powerups let you improve your main gun, and you can also get a little “pod” that can float near your ship or detach from it. This little guy provides more firepower, not to mention versatility. You’re gonna need all the extra guns you can call in, too. I would say that we’ve seen harder shmups since; that’s not hard to say with confidence since I’ve played Ikaruga and also seen some of the insane shit people have home-cooked on the Internet. Don’t let that take away from the challenge of R-Type, though. It is not, in any way, fucking around.

The visuals are pretty rich for 1987, most notably the environmental art and the huge (sometimes gross) bosses. Lots of attention to detail, rich color depth, and surprising complexity for 384×256. There is a giant spaceship, as well as several aliens of varied forms, and all of them are rendered in surprising detail. The music is pretty ponderous, and the sound effects get annoying quickly, but that’s really the only department in which R-Type suffers.

I’ve waited for a long while to bring up the roguelike genre in one of these articles. If we were to go just by logged hours, by sheer time spent playing, I’d say this genre of game would rank in the top 3 for me personally. I will define the format in the briefest way possible: the player chooses from a couple of sets of parameters (usually a race and character class, like most RPG fans are familiar with), then is placed at the beginning of a randomly-generated dungeon or other environment with the idea of achieving a particular goal. Play is turn-based instead of realtime, allowing for careful thought and planning. You will usually die a horrible death before achieving your goal, but the fun is seeing how far you can make it.

NetHack is only two generations removed from  Rogue, the 1980 Unix-based game that started the genre. I’ll go ahead and mention now that the graphics for these early games were not the focal point. NetHack is also not known for its breakneck action, although it can get really exciting if you’re into it and have an imagination. And for those of you who don’t, well, there are tilesets for the modern iteration of it that offer a richer visual experience. In fact, the game has continued to see maintenance and updates, last releasing a new version in 2015. 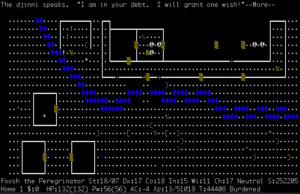 This is what the vanilla version looks like. IMAGINATION, MOTHERFUCKERS 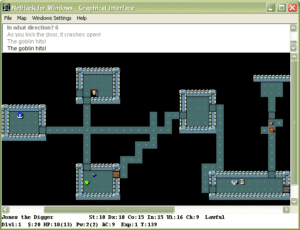 An example of a tileset version. If ASCII characters don’t do it for you, I hope this does.

In NetHack, you choose your race, role (class), gender, and alignment (lawful, neutral, or chaotic) and head down into the dungeon to retrieve the Amulet of Yendor. The amulet is said to grant immortality if offered to the gods. Why the hell anyone would want to live forever is beyond me, but maybe I’m just a downer. There are, of course, sub-quests, one of which is specific to whatever class you chose. The dungeon is about 50 floors, and the journey is never the same twice. Needless to say, the dungeon is chock-full of all kinds of monsters (and I mean all kinds; the variety is staggering), most of whom want to murder the shit out of you and eat your body. There are also a lot of leftover bits of gear lying around from the chumps who tried this before you, and some of them (potions, scrolls, etc) give no outward indication as to their purpose or effect. You can always go in blind, but that’s as risky as it sounds. Drinking something when you don’t know what it is? Sounds like the way several of my early D&D characters fucking died. Let’s do it!

Oh, and when you die… you’re dead. No retry, no saved game. Start again. Make a new character. Therein lies most of the challenge and enjoyment of the game.

Usually I take a giant shit on at least one of the games I write up in these articles. It wouldn’t be unreasonable to expect me to do that to Zelda II. It received positive critical reception in 1987, and even some modern gaming sites consider it to be pretty solid. However, if you ask many individual players – real folks like you and me – they’ll tell you that Zelda II is clumsy, needlessly elaborate, tedious, and unapproachable without a guide or walkthrough. 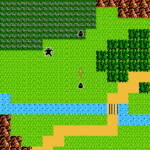 This. This, right here, is gaming at its finest. Please put a flathead screwdriver in my brain.

I fall somewhere in between. I’m not crazy about the game’s tacked-on RPG elements; I think that, at the very least, they could have made leveling up go faster. It’s also incredibly annoying to have little figures chase you on the world map. More significantly, the game relies on a lot of hints and instructions from people in the towns, and a little clarity seems lost in translation. The plot is also utter bullshit. In fact, it angers me. It’s Zelda, but not the Zelda from the first game? How many Zeldas am I gonna have to fuck with, here? There was no need. No need.

It’s not a terrible game, though. Zelda II has a lot to offer the modern player. 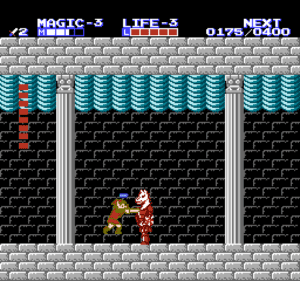 Sneering, it mocks you in your weakness.

Get yourself a walkthrough, preferably one that focuses on clarity. Walkthroughs can suck the fun out of most RPGs, but this one actually benefits from a little help on deck. That way, you can focus on not getting your ass constantly kicked in stupid ways. Don’t forget to pick up the stupid little goddamn bags that appear when some monsters die. That’s part of leveling up.

When you are able to separate from these elements, it can actually be a fun challenge to navigate through Zelda II. Progress involves fighting carefully, calculating risks, and learning the weaknesses of the monsters (particularly the rowdy crew of assholes inside the palaces).

The graphics are standard for NES in 1987: not great, not bad. The music, though… let’s put it this way. The overworld/map screen music would make terrific music to pipe into a room you were confining someone in for aggressive psychological torture. It’s this violently cheery, over-wrought, bizarrely jaunty tune that belongs nowhere except maybe on a level of Hell that is made out of grandma-candy. The rest of the soundtrack is fairly good. If you pay close attention to the intro music, at one point it sounds like the melody to a Nickleback song. Don’t ask me which one, because the only times I’ve willingly listened to Nickleback were out of tolerance or sheer circumstance. I just have an ear for music.

R-Type – 7/10 (hell of a good shooter, innovative for its time, good challenge. Why does one boss look like a huge alien cooter though?)

NetHack – 8/10 (If you like an RPG experience that is protracted, cerebral, and casual yet detailed, this type of thing is for you.)

Zelda II – 6/10 (There’s plenty not to like about it, but I can get into it if I just turn off little parts of my consciousness or achieve ego death.)