Comic related articles at NRW tend to accomplish one of two things. The more frequent articles are reviews of the latest comics, with the hope of letting you know what is and is not worth rushing to your local comic shop to pull.

Comic related articles at NRW tend to accomplish one of two things. The more frequent articles are reviews of the latest comics, with the hope of letting you know what is and is not worth rushing to your local comic shop to pull. The less frequent articles are retrospectives, like my X-Men retrospectives, and these are designed to give readers a greater idea of specific eras and years in comics history in a more personal way than a lore-drenched wiki. Octal works a little differently.

Octal is a catalog of eight comic pitches. It doesn’t include complete first issues of these potential comic series, but it does include an 8-page pilot to demonstrate the artist and writer’s prowess, followed by some behind the scenes sketches and a one-page synopsis of the comic and future goals of the project. This review will look at the pilots individually and hopefully give you an idea of what to keep your eyes out for, as there is some great stuff in here.

Posession is definitely the pilot most relevant to NewRetroWave readers and fans of 80’s nostalgia in general. The story covers two people imbued with the powers of Aries and Aphrodite respectively, and the pitch in Octal shows the two as a night dancing takes a turn for the chupacabra. Michael Norwitz and Mary Ann Vaupel’s writing, Julian Taveras’ artwork, and Robert Nugent’s colors all coalesce to create a The Wicken + The Divine (my personal favorite comic series) meets Hotline Miami vibe. Ultimately it works very well. The couple with the powers seem to be in an open relationship, which is treated with a surprising lack of moral judgment and seems pretty in-line with how Greek gods and goddesses might react to a modern society. This is definitely a title to keep on your radar. 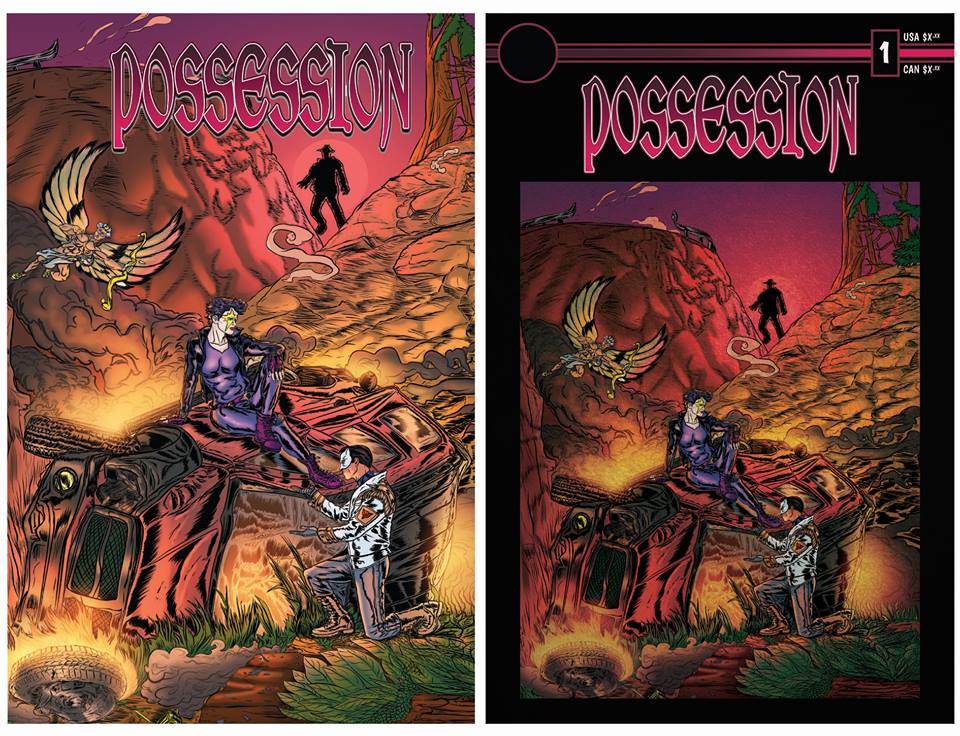 Charmer is definitely another title to keep an eye out for. The first issue has recently been successfully crowdfunded via Kickstarter, and I will be utterly shocked if it doesn’t get picked up for a full series. Few ideas seem as though they have a large open-ended potential story. Reading the back of any first volume trade paperback and having a reasonable understanding of storytelling usually gives you a solid prediction of how an entire series will end. If a series does have that open-ended storytelling potential, it then becomes a battle to make that potential story seem interesting. Writer Bill Williams has managed to do both. After reading the pilot, which involves a blonde axe-wielding sorceress (essentially a lovechild of Buffy Summers and Willow Rosenberg), it is very obvious that he has written for comics before. It feels laser-focused and strikingly confident. Ricardo Silva gives the story additional life through its art, and colorist Natalia Marques provides the best coloring found in all of Octal: Volume 2.

EDIT: Charmer has been picked up Pond Scum Comics. Congrats to the creative team. Pick up #1 in January – I know I will.

The best art in the entire book belongs to Celflux, which is a previously published series, is seeking omnibus treatment. If the quality of the eight-page pitch is indicative of the series, it certainly deserves it. Dixie Ann Archer-McBain’s story is immediate and effective and Everard McBain Jr.’s art represents fantasy in a completely original and absorbing way. The art often breaks the bounds of traditional panels and really helps cement the strength of the story. Travelers is, without question, the most visually and narratively jarring pitch. Creator Emir Pasanovic has an excellent article over on Bleeding Cool about the process of getting into Octal that’s worth reading. His comic starts off with a very traditional noir set-up, highlighted wonderfully by Milenko Bogdanovic’s artwork. Things get really interesting when an android passenger on a train is introduced to him. The interesting space of science fiction and discrimination makes this an extremely interesting story and gives New Petersburg a distinct identity even if we only really see a train in the pilot.

The comic pitches in Octal: Volume 2 are all very high quality, but these four are the standouts. Keep an eye on these creators and follow their work. Octal: Volume 1 came out earlier this year, and I will provide a look at that soon.