USA’s UP ALL NIGHT episode “Toxic Avenger” Look at what I found. Looks like I’ve found an entire episode of USA Networks UP ALL NIGHT starring the late Gilbert Gottfried. See, in 1989 USA network was trying to establish a foothold on the burgeoning cable network

Look at what I found. Looks like I’ve found an entire episode of USA Networks UP ALL NIGHT starring the late Gilbert Gottfried. 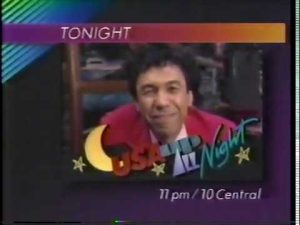 See, in 1989 USA network was trying to establish a foothold on the burgeoning cable network wars. Imagine the competition we see happening now between streaming sites except back in the 80’s with analog cable network channels. The USA Network was once a sports network but, under new management began making moves to branch out its programming with original properties and syndicated shows. Yes there was still Golf broadcasts and Tuesday Night Boxing Nights was still a great time. But, now you had new seasons of AIRWOLF, The Hitchhiker, Ray Bradbury Theater, Alfred Hitchcock Presents, reruns of The New Mike Hammer, Murder She Wrote, Street Hawk, The Equalizer,  Dragnet, Werewolf, and then later Silk Stalkings, Swamp Thing and eventually the monolith that was Monday Night Raw. More importantly was the fan favorite late night movie show: UP ALL NIGHT that ran from 1989 – 1998.

Originally hosted by Gilbert Gottfried on Saturdays and by Caroline Schlitt on Friday nights (later replaced by Ronda Shear) Up All Night was a late night movie showcase similar to the Late Movie and the Late Late Movie show on ABC. Each film would be bookended by a skit from the host with additional skits peppered before and after commercial breaks. Most nights there would be two films and in later years a third film would be added without any skits just the UP ALL NIGHT title screen. The majority of the films featured were cult classics, B movies and low budget direct to video films like: Hell Comes to Frogtown (1988), Nightlife (1989), 976-Evil (1988), Bachelor Party (1984), Basket Case (1982), Body Double (1984) and you get the point.

This is the best quality I can find on site with the best volume. And the vintage commercials are included. Yes, even better than the film, the original aired advertisements are included.  Making this a must watch Retro Pick.

So sit up and kick back. Keep your fingers on that REWIND button and enjoy USA’s UP ALL NIGHT and the Toxic Avenger (1984).