EDIT: Thanks to a lot of work from the community, most of the stolen tracks have been removed. Hopefully, the Shazam will be taken down soon too. Great job everyone! Overnight, a grand drama has developed in the synth scene. The darksynth / electro producer CYBERTHING!

EDIT: Thanks to a lot of work from the community, most of the stolen tracks have been removed. Hopefully, the Shazam will be taken down soon too. Great job everyone!

Overnight, a grand drama has developed in the synth scene. The darksynth / electro producer CYBERTHING! was scrolling through Spotify to discover new music, when instead discovered the remnants of a digital heist! The alleged thief in this case had not stolen credit card numbers or bitcoin – but rather, music. Darksynth and cyberpunk to be exact – as well as album art.

It looks like the alleged thief manipulated the tracks so the Automatic Content ID system didn’t catch them. Cyberpunk indeed!

But this isn’t just a story of alleged theft – it’s also a story about how the larger synthwave community came together to identify the stolen tracks, notify the artists, and hunt down the perpetrator! 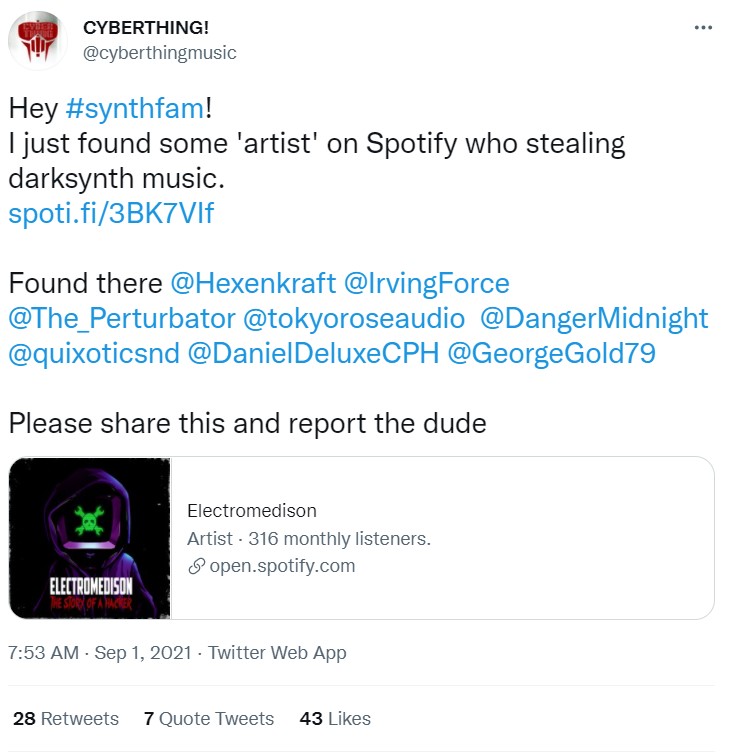 “I was just looking for new music.  I’m always looking for some new unnamed artists who can do something interesting….

So I found this guy’s ‘album’ and the first track was awesome (of course it was, cause it was Street Cleaner – Vultures) but I didn’t understand it right away, since the track was a little pitched down and sounded a lil different. But the second track was Perturbator lol. So I started to Shazam the tracks and made this Tweet after that.” – CYBERTHING!

The alleged perpetrator of this heist appears to be one “Electromedison.” They may also go by “DO.RE.MI.XX Production Story,” and/or “Cybershot.” It appears many of these albums and tracks have been up under false names for almost a year.

We reached out to Electromedison for a comment, but at the time of this writing, we have had no response.

Editors Note: We will not link to these “releases,” and we strongly discourage you from seeking out these releases too, as we do not want to give this alleged thief any money from streaming!

If you are a darksynth/cyberpunk artist and you’re worried your music may have been stolen, the unidentified tracks are listed at the bottom of this article, and most of the albums in question can be found on Electromedison’s Soundcloud, and they do not appear to be monetized there.

Upon finding these maliciously uploaded tracks, CYBERTHING! spread the word on social media, tagging every artist who’s work he could identify. News spread like wildfire, and soon the fine folks over in Nightride FM’s discord channel had begun the hunt, finding and notifying many of the artists who had their work stolen. Eventually, DEADLIFE compiled and tweeted a list of the stolen tracks and the original artists the awesome Nightride FM community could identify.

Dozens of darksynth and cyberpunk artists and their labels are affected, including:

In fact, it seems every single track from these releases was allegedly stolen, though there are still unidentified tracks.
(See the full list of stolen tracks below.)

It also appears the album art was also stolen, with one of them being identified as Steven Holliday’s Creepshow anniversary poster.

A number of artists also confided in me they believe they have found the original perpetrator, but we will not provide real names here, as we aren’t in the business of witch hunts. However, a friend-of-a-friend reached out to the person in question – and this was his response:

Haven’t heard of Electromedison? Us either – in fact, no one really has. This “artist” has zero social profiles. In spite of this, the pirated tracks have been spread all around the net: they’re on Spotify, Shazam, Itunes, Amazon, Beatport, TikTok, – you name it.

That’s actually why I’m writing this article – so artists who are affected can find their tracks and be sure to report them on their respective services. I can’t imagine anything worse than losing fans because Shazam took you to an imposter’s tracks.

There’s only one way that so many different platforms could fall prey to this scheme: a music distribution service.

In this case, it seems that the distro service in question is FreshTunes, though there could have been other services involved as well.

We want to give everyone the benefit of the doubt, and to their credit, FreshTunes clearly states in their Terms of Service that copyright-infringing material is not acceptable on their platform – and the content is currently being taken down – so this does seem like the actions of one rogue actor, and not FreshTunes. It has also been less than 24 hours since the initial complaints were made too – that’s a pretty quick turnaround time for takedowns – though the music in question is still available in several places.

We reached out to FreshTunes for a comment, but at the time of this writing, we have had no response.

Big shout-out to DEADLIFE and the fine detectives of the Nightride FM discord who helped track down many of the stolen tracks below!

Album: (As Cybershot) – Mechanism Of Action