The God of Literature has been alarmingly generous towards me in the last two years. Among many of his/her/its blessings was Iain Reid’s debut novel - "I’m Thinking of Ending Things". 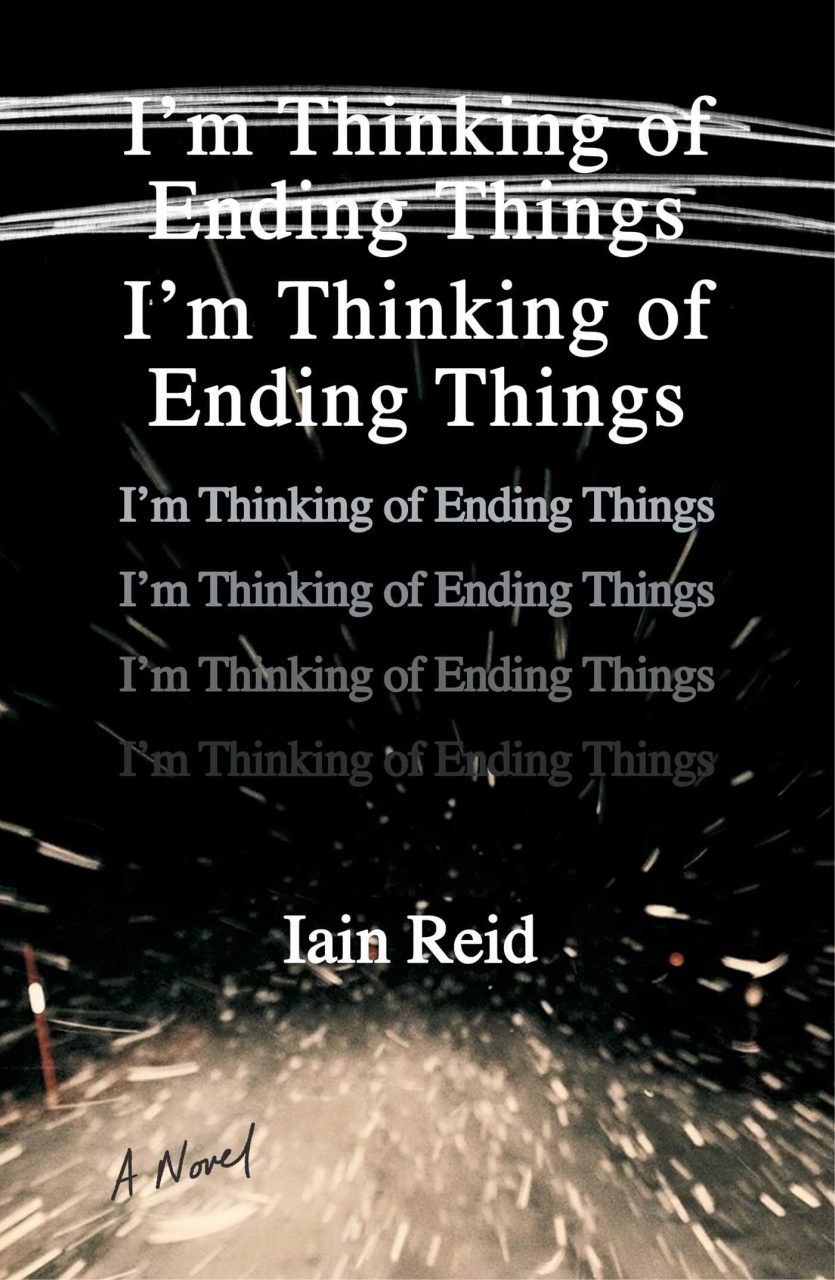 Somewhere there is someplace

And somewhere there is someone

Who can see what I can see.

Long time no write. That’s right. I’ve been… outside for a while, somewhere else. Where elsewhere tempts. Yet, to quote Michael Jordan, AD 1995 – I’m back. I feel an unspecified necessity to be again… You name an ending the ellipsis should turn into. Period. Enough confessions.

The God of Literature has been alarmingly generous towards me in the last two years. Among many of his/her/its blessings was Iain Reid’s debut novel – I’m Thinking of Ending Things. You might have watched its film adaptation or at least mehed at it while picking another Netflix show to binge on. That’s all right. The movie is a separate unassuming masterclass of its own. We are going to leave it alone, though. After all, firing reviews akimbo results in many words that miss or even missing word holes, doesn’t it?

Woven into a straightforward braid of sentences, ornamented with occasional barrettes of enchanting dictionary diamonds like cruciverbalist as well as amusing expressions such as compressed Uma Thurman, the novel saunters on at a slow pace. Its form? A well-balanced blend of highly introspective soliloquy and a regular ‘still-getting-to-know-each-other’ dialog between two self-aware individuals who have recently begun going out together. The above mixture gets interposed by short narrative intrusions which imply some unknown tragedy. What is the couple up to? Meeting his parents who live on a somewhat middle-of-nowhere-ish farm. What happens next? When Jake and his new girlfriend reach their destination, a bizarre, eldritch, suspenseful creepiness kicks in. And? And as it steadily grows, like an untreated cancerous excrescence, we are doomed to succumb to its shattering, malevolent rupture at the very end.

Feeling-wise, I’m Thinking of Ending Things is like a sarcophagus. Stupefying and overbearing, it entombs you in the enthralling entirety of execrable emotions sprouting from existential anguish and regret. With its extremely innate exclusiveness, only true Steppenwolves of the 21st century are chosen to experience its thunderously devastating charm and charring aftereffects. Those who had stared into Nietzschean abyss for so long it became their mirror which does not cast reflections, nor does it stare back any more – it devours alive instead. Those who had been literally thinking of ending things so many times they were forced to reject the very idea itself because, metaphysically, it turned out to be the same in-world event as everything else and there would be no escape whatsoever. Those who eat Dostoevsky’s Notes from Underground for breakfast, Shlomo Venezia’s Inside the Gas Chambers: Eight Months in the Sonderkommando of Auschwitz for lunch and call it a day having a rare steak of Camus’ The Fall and Vaslav Nijinsky’s diary as sides for dinner. Those who dance on a razor’s edge of derangement, a full-blown derailment, complete and thorough detachment from common sense. Those who play ontological hooky. Those who fall uncomfortably silent when Marlon Brando delivers his famous ‘I coulda been a contender’ lament on the back seat of a cab in the movie On the Waterfront. Those who long for inability to reminisce and strive for forgetfulness but do not resort to banal resolutions like drugs or alcohol. Those and only those can see… Hmm, the list of ‘thoses’ grew suspiciously long. Perhaps old Amonne was wrong and the book is inconspicuously inclusive, after all. And we are all howling in our own private unforgiving taigas like there’s no tomorrow, having thoughts that cannot be faked, being stuck in places one million eyes can’t see…

Countless sheets of paper have been printed about an idea of singularity of things. The oneness, undeniably tempting as a phenomenon since time immemorial, may be the only known approximation of eternity immobilized or shall I say immortalized in a ‘snapshot’ of metaphysical unrepeatability which our limited human perception is able to grasp. Temporal and spatial infinity captured, squeezed into a finite ‘package’, tangible enough to be perceived. Sounds pretty neat, doesn’t it? Well, the reverse is even better. Imagine something incredulously infinite, stemming from something totally manageable, within reach of our senses, something we encounter everyday, a common, ordinary thing. A saucepan, a flowerbed, sleeping pills, stuff like that. Reid’s debut is a perfect example of a novel which embodies the very idea. From the lame, almost trite motif he extracts a gateway to immeasurableness which does not lose its palpable dimensions, does not disperse into obtuse abstract lack of referentiality WITHIN the reader. This passage clings on to you, mercilessly. The more have you been tormented by things from the list I mentioned in the paragraph above, the stronger their grip. And the said unrepeatability is one of the most soul-wrenching irreversibilities I have ever come across in literature. Surely, you may find loads of other examples, just go grab the nearest crime fiction you can lay your hands on. You cannot reread it in a way you read it the first time – you know who the killer is. Frankly, all books fall under this category. However, the irreversible nature of I’m Thinking of Ending Things seems to harmonize with a particular resonance of human ability to feel emotions. Not the obvious ones like gratitude, worry or shame but those which would give you hard time putting your finger on them, i.e., almost solipsistic case of loneliness, a prolonged bile which morphs into utter desolation, a state of being metaphysically hounded by wasted opportunities, etc. This is the place where Reid’s novel takes us to. New, unnameable emotions begotten by simple ordinary words. Hats off, Mr. Reid, hats off! You have found eternal ally not only in every Steppenwolf, but also in their far more elusive, almost phantom-like cousins – Desert wolf and Arctic wolf – who are chained into the confines of this barren reality as thoroughly as their HESSEtantly two-faced peer. You have certainly made their night howls a little less haunting, a little less self-annihilating. Maybe even a little less wolfish…