Kate (2021) Seems like the people that brought us Atomic Blonde (2017) teamed up with some other folks and dipped their hands into buckets of Netflix cash to give us – KATE. A one word title for a simple story that could be wrapped up in just

Seems like the people that brought us Atomic Blonde (2017) teamed up with some other folks and dipped their hands into buckets of Netflix cash to give us – KATE.

A one word title for a simple story that could be wrapped up in just one word –
“No-nonsense”. Yes, technically that’s two words but, you get the point. 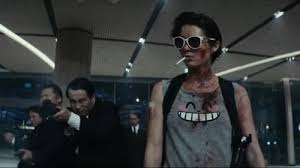 This is a no-nonsense, hyper stylized, female revenge film set in Japan. No, not KILL BILL. No; not HAYWIRE. Kate is more obviously inspired by anime and video games.

It’s more anime than you’d expect and more video game than John Wick. The injections she takes to extend her life-bar that reminded me of Metal Gear Solid 4 (Every time she was on the verge of dying I called out, “snake?” “Snake?”, “ Snaaaaaaake?”). Another nod to video-game/anime culture being the car chase that sounds like the opening credits to some new racing themed Shonen  anime similar to Initial –D, and don’t forget the tons and tons of Ghost in the Shell and Blade Runner inspired scenery.  Yes, this movie is CYBERPUNK as fuck.

More low life than Hi-Tech and cyberpunk from the prospective of a High-rolling mercenary caught in the middle of a Yakuza clan war in the nocturnal underbelly of Tokyo, Japan after being poisoned by radioactive material. Kate is determined to weave, stab and shoot her way through the back streets of Japan and eliminate any Yakuza responsible or in the way of her wrath. You can easily create a character based on Kate for your next table-top cyberpunk RED campaign in cooperation or in secrecy subverting your friends.

Soundtrack is serviceable to the overall setting of the film piece. Band-maid, Okinawa Electric Girl Saya, OOIOO, Sakurako Ohara, MoNa a.k.a. Sad Girl, and one of my favorite j-pop groups Aural Vampire.

Kate was released on Sept 10th, 2021 and received mixed to not so flattering reviews and reactions from audiences. Some film critics were dismissive of Kate. In my opinion, this is a better film than Gunpowder Milkshake. Gunpowder with all this style and flash and star power failed to engage me with its action set-pieces. Action scenes need to have emotional content. If the film doesn’t keep your interest with its story (regardless of its originality or lack of) and the fight scenes aren’t edited or filmed well then, you might as well watch a televised ballet; it doesn’t matter if they are choreographed superbly. Richard Roeper of the Chicago Sun-Times may disagree with me since he enjoyed Gunpowder’s flashy fantastical acrylic gloss dripping all over its shallow exterior. Kate to me is what a live-action retro cyberpunk OVA would look like (OEDO 808 (1990), ANGEL COP (1989)). Like I said, this whole piece feels like a gumbo of video-game and anime. I enjoyed it. It was simple and at its core the story although unoriginal was acted well-enough for me to be engaged. The visuals alone is worthy of a blu-ray or 4K purchase. I liked it and can’t wait to own it.