DEADLIFE – Past, Present, and Future

DEADLIFE’s latest momentous release “City of Eternal Rain” is easily one of this humble editor’s top albums of the past five years. It debuted at #12 on Billboard’s Electronic Sales charts, and many fans around the globe are just now starting to receive their awesome 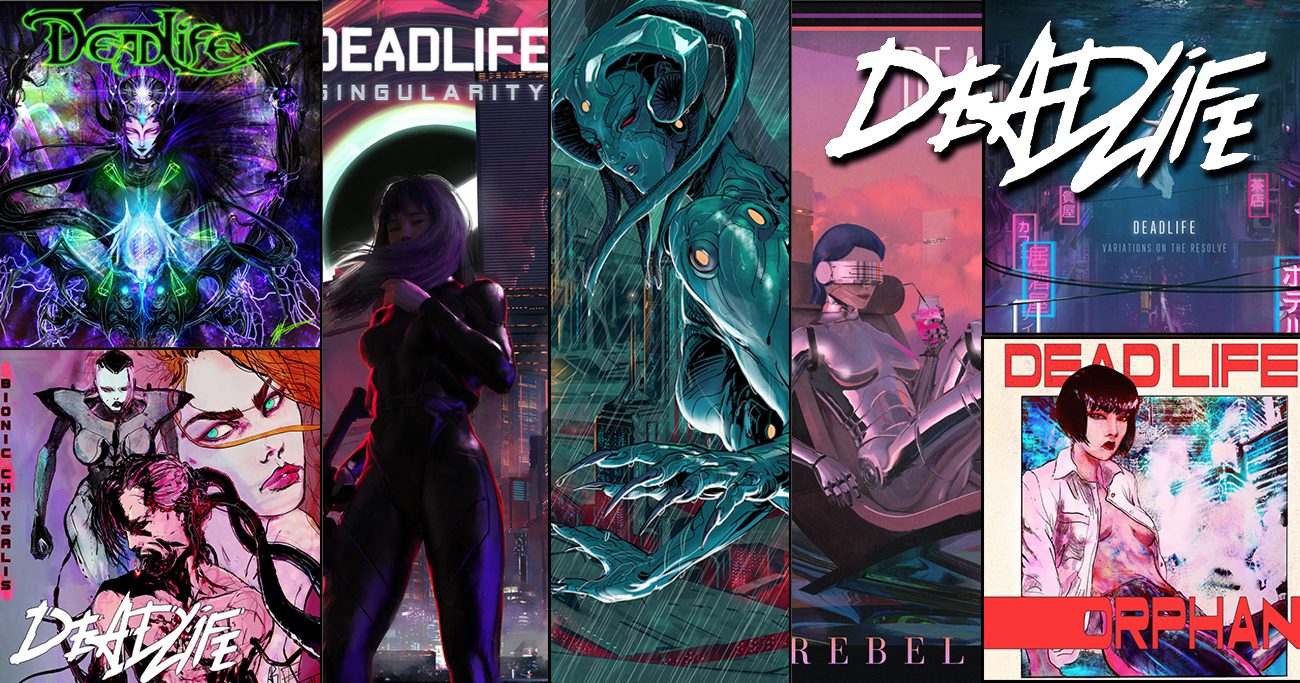 DEADLIFE’s latest momentous release “City of Eternal Rain” is easily one of this humble editor’s top albums of the past five years. It debuted at #12 on Billboard’s Electronic Sales charts, and many fans around the globe are just now starting to receive their awesome cyberpunk splatter vinyls. In honor of this occasion we at NRW decided to take a deep dive into Deadlife’s releases – and give a hint at what’s coming around the corner! 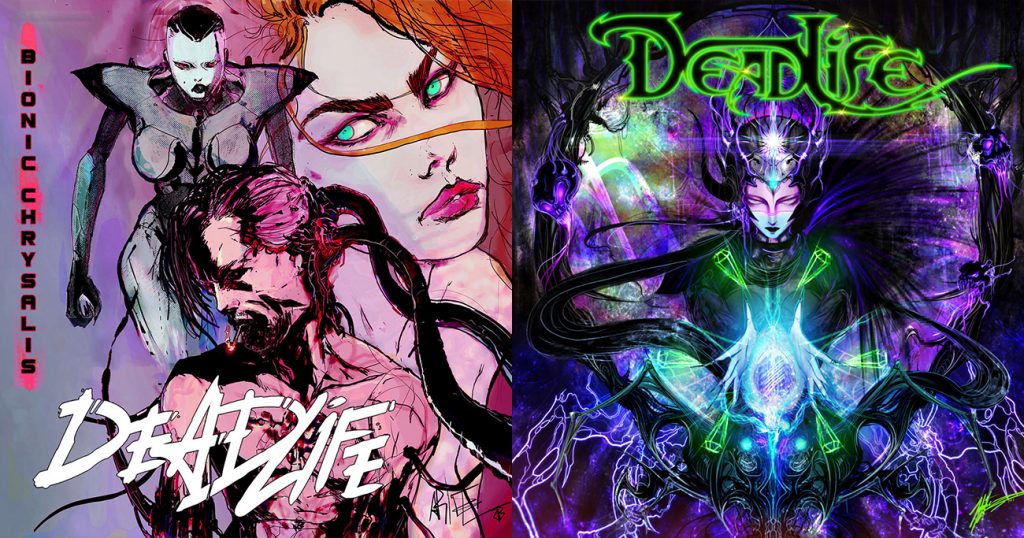 “I mainly always listened to electronic music and soundtracks. Even when I was in bands, I only really listened to instrumental OSTs, so it was always something I wanted to do. When I left the band I was in it was pretty natural to go into producing that kind of stuff. It’s what I loved most. “ – Ed Hawx

Premiering in 2017, “Bionic Chrysalis” was not an instant mega-hit. Some hardcore darksynth fans took notice – but it wasn’t until later that year that MetalSucks posted their glowing review and placed it in their top 15 albums of the year that it gained wider notoriety. Now, “Bionic Chrysalis” considered by many as a cult classic of the darksynth genre.

“Bionic Chrysalis” certainly had all the trappings of a major darksynth album – an intense, upbeat, and dramatically raw dark synth score – but it also broke the darksynth stereotypes in many ways. With bits of cyberpunk, chiptune, minor elements of French House, and an array of hauntingly beautiful melodies, this album was more house than the Perturbator / Carpenter Brut / Dan Terminus / GOST headbang.

A fierce follow-up to “Bionic Chrysalis,” “The Order of Chaos” continued to progress DEADLIFE’s unique and intensely melodic darksynth sound. This album felt even harder than his debut, even touching on some minor elements of dubstep. We also hear some more traditional elements of darksynth, such as high-pitched shrieking “Psycho” synth stabs

However, amongst the harder darksynth are hints of a lighter, almost ambient touch – such as “Anxious Souls” and “Digital Rain (feat. Mecha Maiko).” A hint of what was to come next. (PS – There are still Vinyls available here!) 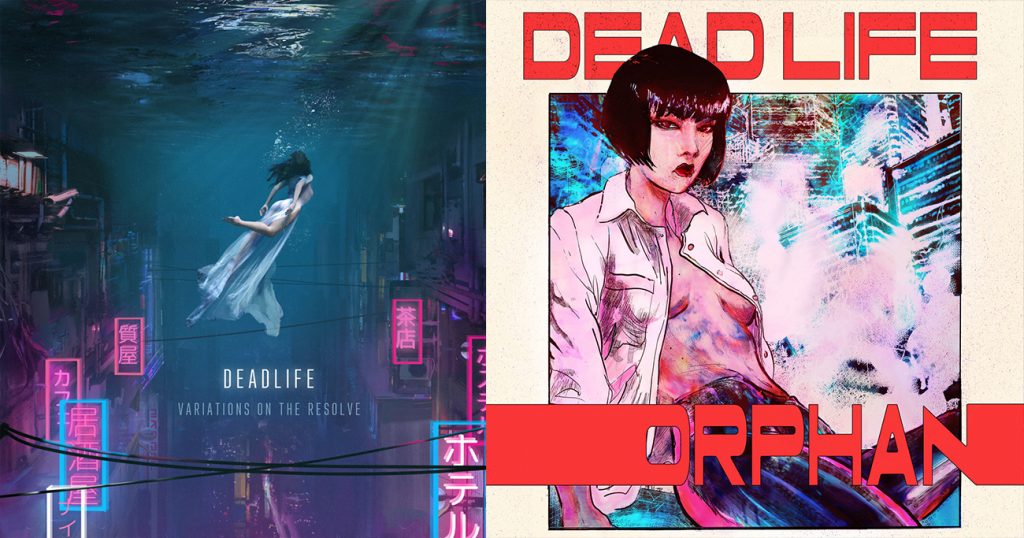 “I felt I’d kind of explored the darker intense stuff and wanted to do something totally different for a couple of records. It kept me fresh and learning new stuff. Also, I was in a very specific kind of head space where I wasn’t sure where I was gonna go with my sound. As it turns out I went on to do Singularity, which I don’t think I’d have done if I hadn’t done Variations and Orphan. I wanted to expand my sound and those albums helped me do that” – Ed Hawx

In a stark contrast with his first two albums, “Variations on the Resolve” is a largely atmospheric, ambient-based album. Most fans were taken by surprise – some were even quite upset by this change in direction. However, as any good artist knows, creating music is about more than just pleasing your fans.

But, In addition to those that were upset, even more were intrigued. The lush soundscapes contained in “Variations on the Resolve” are beautiful and haunting in their own way. The mixture of dark synth music and ambient tones were unlike anything we had really heard at the time.

Continuing the trend of experimenting with atmosphere, “Orphan” was a mix between almost beat-oriented music and ambient sounds, reminiscent of Shlohmo’s early albums. I personally thought it was an “Exercise in Brilliance,” and one of the best albums I had heard that year. Yet still, fans were worried DEADLIFE’s darksynth days were behind him – so much so he took to social media to explain that was not the case.

In my review, I related as much: “So, for those of you that fancy their synth hard and fast, don’t worry – the old DEADLIFE isn’t dead – just beautifully mutating in his chrysalis. In the meantime, don’t miss this evolution.”

And evolve he did. I

“I wrote Rebel Nights off the cuff because it was a really hot summer and it just kind of came out. I did one song originally and my friend was like “You should do an album like that for lolz” and I was like “ok!” So that was in the bank for a while, then I did Singularity the following year (I wrote Rebel Nights in summer 2018), and showed both to NRW. They said let’s release both and I was like sure why not!”

“I guess I’m always learning stuff and finding my sound and refining it. Cyberpunk has always been something I love from the beginning, I’ve been into the subculture of it for years for both it’s aesthetic and socio-economic sides. I’ve always viewed my stuff as rooted in cyberpunk, but it is what it is. After all it’s kinda hard to know what cyberpunk music would be, it has varied throughout the years. But as an artist I am definitely leaning more toward the cyberpunk gothic side, with a lot of inspiration from the subculture, novels, films and also fantasy cyberpunk like certain Final Fantasy games. It kinda all just coalesces into the melting pot, and comes out as an amalgamation of all these things tied together.” – Ed Hawx

This double-release saw the beginning of DEADLIFE’s new awakening. “Rebel Nights” was an interesting release, mixing chillsynth elements with minor key melodies to create a metallic yet relaxing effect. It’s probably the first time we’ve ever heard DEADLIFE go full beach vibes. I really regret not grabbing a copy at the time myself though, because as the new chillsynth genre expands it’s clear this album was really quite ahead of it’s time.

“Singularity,” on the other hand, starts to hone-in on that sound it feels like DEADLIFE was looking for. Nostalgia mixes with darksynth to create a wholly heart-wrenching but intense experience that feels miles ahead of the darksynth DEADLIFE started out with. “The album really shines when the combination of darksynth and cyberpunk genres are held together with more major nostalgic tones. This where DEADLIFE really nails something special.”

There’s not too much more to say here. It’s the latest incarnation of DEADLIFE’s sound, bringing all of these disparate elements together to create something brilliant. It really is quite a cyberpunk masterpiece. Check out my full review here if you haven’t read it yet – and grab a listen here!

So what does the future hold in store for DEADLIFE a? I asked the man himself:

“I have a lot coming. One full album that is a follow on from City of Eternal Rain, and I’m working on another that is way more downtempo and cinematic – an album that could be a soundtrack for a film – but the film doesn’t exist. I guess the latter is just me experimenting and having fun. Also I’m looking to go live in 2021, which I’m really psyched for. I’ll prob give it a test run and then build from there. But I’ll always be writing for sure, I just love making music.” – Ed Hawx