There’s no rest and relaxation for the terrorized couple featured in the tense 1989 Australian thriller Dead Calm. A time of recovery in grief becomes a fight for life when they come across a man with a dark secret. How will they survive in the middle 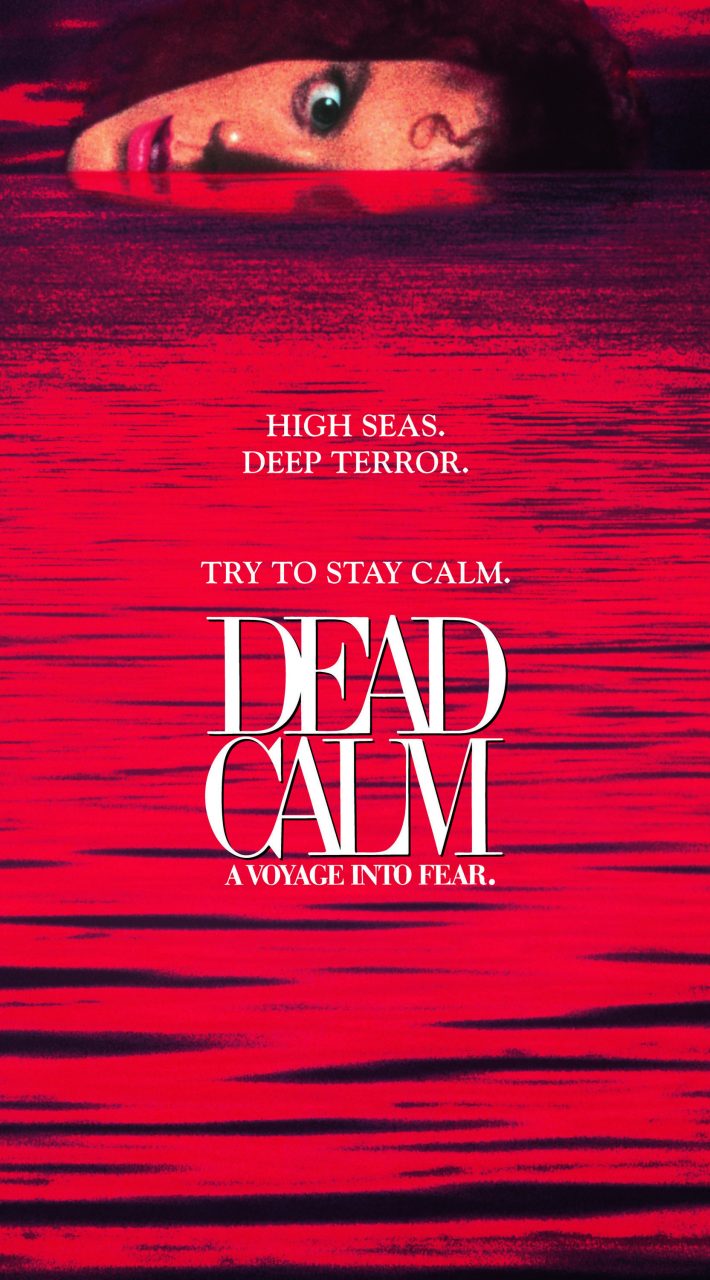 There’s no rest and relaxation for the terrorized couple featured in the tense 1989 Australian thriller Dead Calm. A time of recovery in grief becomes a fight for life when they come across a man with a dark secret. How will they survive in the middle of the Pacific Ocean isolated from outside help?

Within the first few minutes of director’s Phillip Noyce’s feature, you already empathize with John (Sam Neill and Rae (Nicole Kidman) Ingram. A joyful homecoming for the naval officer turns into a familial tragedy. To recover, John takes his wife on an extended vacation on their yacht. The couple spot a mysterious man (Billy Zane) furiously rowing away from a stranded ship and towards them.  What is he hiding behind those boyish looks? Will their assisting him be their last mistake? What will happen if the dead calm of the ocean begins to stir?

A film of this sort can be hard to pull off. Why? Because the cast is small and the setting is one of isolation, the focus is primarily on the performances of the actors. With a larger cast and multiple locations, you can often overlook a bad performance or two or a mundane plot if the action is varied and there are great visuals. This way you’re not fixated on the weaknesses of the feature.

Fortunately, all three actors perform well, pushing the story along so that you’re wondering what each will do next under the circumstances. Neill portrays John as the resolute and capable husband that he would likely be as a military man. Although he makes an early error in judgement, he does his best to recover and survive with the skills that he would’ve likely learned in the navy. However, Kidman really shines as the hero of Dead Calm. She makes physical and emotional sacrifices to deal with the terror inflicted by Hughie, the mysterious young man brought aboard. It takes an incredible actress to portray the varied emotions that she displays as Rae. It’s an amazing role for her, a then-young woman known for light comedies such as BMX Bandits.

What about Billy Zane? It’s a shame that his career hit an apex in the mid-nineties with The Phantom and Titanic. In this role, he’s able to combine a devilish charm with an unsettling presence. When you first view Hughie in a frantic but tired, terrified state, you can sense that something is not quite right, but the ultimate mystery still hovers. There’s a brief scene where he is staring back into the distance with a haunting look on his face while the music swells. In another context, this could be a triumphant stand of the hero. However, we know this character is a psychopath with a sordid path. Is he regretful of what he did? The viewer has to decide. 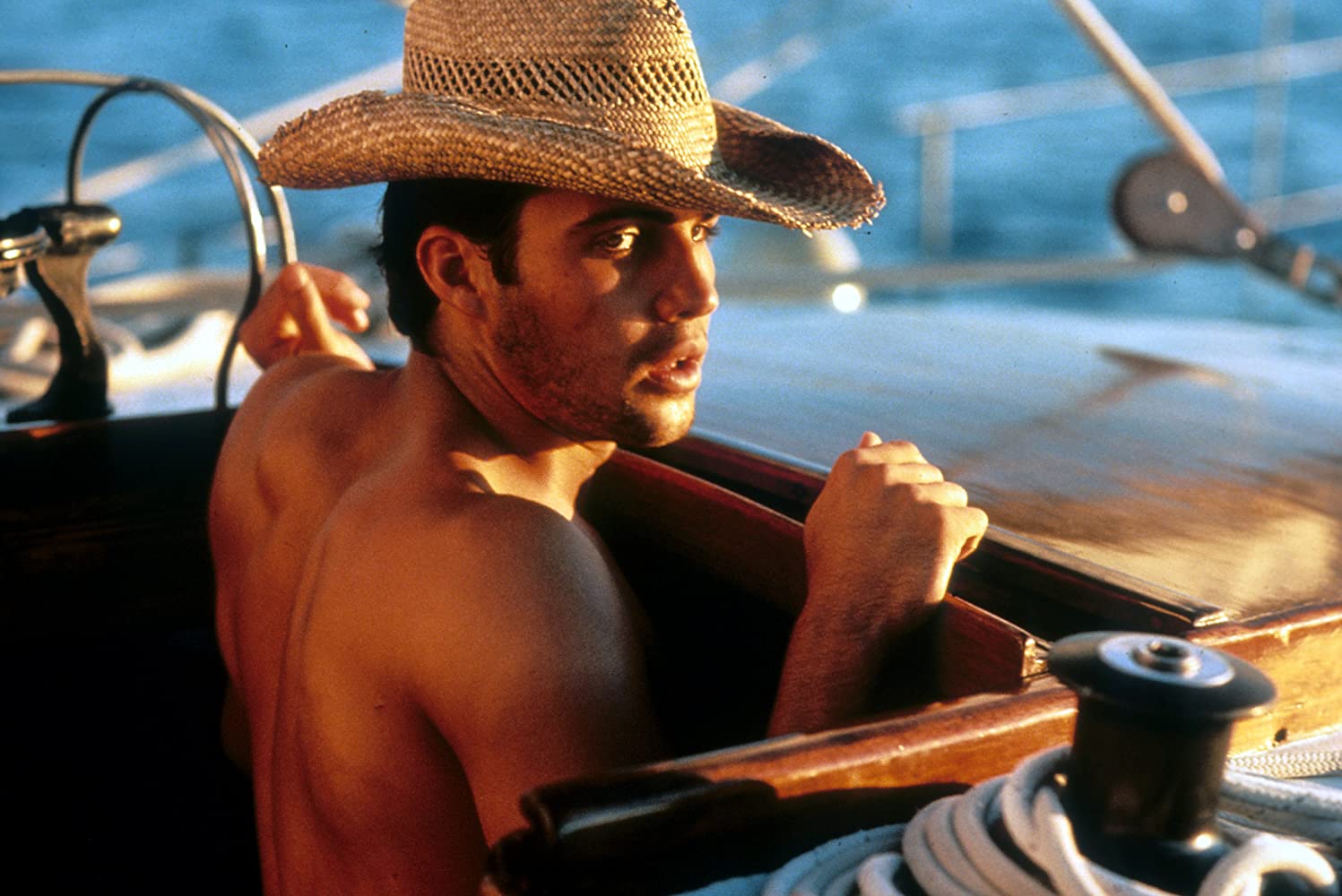 The discussion of this scene brings us to one of the highlights of Dead Calm: the music. Graeme Revell, then new to film composition, brings a unique take to the genre. Having a background in the industrial scene of the time, he brings a touch of that to the synthesized-based scoring. The music is often rhythmic with tribal tinges to it. In addition to the track “Sadness” that plays during the previous scene just mentioned, the other highlight is “Finding John” that mixes a calming synth line, pulsating beats, and chant-like breathing. Combined with the dusk-to-night visuals, it leaves an impression.

Most of the filming takes place during daytime. Compared to nighttime action, it can be harder to convey horror during the bright daylight. The visuals of a ship against the ocean and the high sun is beautiful; to most people it would convey a pleasure cruise rather than a fight for life. However, the director and cinematographer are able to a picture of relaxation into an atmosphere of dread. Instead, it’s during the nighttime where we begin to feel a return from despair to triumph.

Even many who have much positive overall to say about the film have one major gripe: the ending scene. A fairly grounded film ends in an over-the-top fashion. This does not mean there is fantastical break from reality, but there’s a spectacular conclusion that became predictable in later thrillers. It should be noted that it was not the original ending, which was more open-ended. I don’t feel that it ruins the film; I do believe there could be more connective tissue to how the movie gets there. It didn’t necessarily have to feel tacked on, but it does. Either the studio should’ve let Noyce know they wanted that ending during principal filming, or let the original ending stand.

People seem to mention Dead Calm as a curiosity rather than as a must film now. Generally, they highlight that it lead to Kidman and Zane becoming bankable lead actors. However, though it’s not a masterpiece, one can recognize it as an accessible film that provides thrills without dumbing down the characters in order to move the story along. Moreover, it has a taut running time so that it doesn’t sink under the weight of outstaying its welcome.