I know everyone right now is celebrating Michael Jackson on his what would've been his 60th birthday. Happy Birthday, Jacko. But, I wanted to remember another B-List celebrity of the 1980's, better known as the host of Lifestyles of the Rich & Famous and the 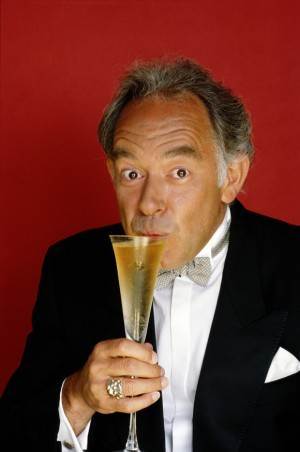 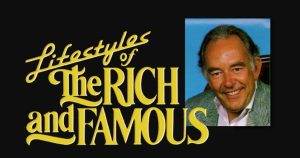 I know everyone right now is celebrating Michael Jackson on his what would’ve been his 60th birthday. Happy Birthday, Jacko. But, I wanted to remember another B-List celebrity of the 1980’s, better known as the host of Lifestyles of the Rich & Famous and the voice behind over the top, cheesey, self-indulgent wealth and celebrity, Robin Douglas Leach.

The loud and charismatic Leach, was born in London and started out as a young editor for his school paper before graduating from and as a local journalist for the Harrow Observer for only a few pounds a week.

He became the youngest “Page One” reporter for the Britain’s Daily Mail before, later moving to the States and worked for publications such as the New York Daily News, People and Ladies Home Journal.

At some point in the nineteen-eighties, Leach became the host and voice behind Lifestyles of the Rich & Famous. Lifestyles was a syndicated series documenting the lives of well-known and (in later seasons)  obscure celebrities and aired from the mid-1980’s all the way into the 90’s when Shari Belafonti was added to the show as his co-host. Shari Belafonti, not a superstar celebrity but obviously recognized as the daughter of Harry Belafonti. An addition that in my eyes was well suited for the show since by this time in the ninties the shows list of stars to showcase started to scrap the bottom of the barrel and almost seem like a parody of itself.

Lifestyles was created by Alfred M. “Al” Masini, who had also created Solid Gold, Entertainment Tonight, and Star Search;all of these were part of his Operation Prime Time project, which he later renamed Television Program Enterprises and later merged with Rysher Entertainment to form Rysher TPE, though Solid Gold or Entertainment Tonight were never syndicated by TPE or Rysher but all 4 are now owned by CBS Television Distribution.”
– https://en.wikipedia.org/wiki/Lifestyles_of_the_Rich_and_Famous

Lifestyles had two spinoff series, Runaway with the Rich and Famous, also hosted by Leach. The series also aired in first-run syndication, from 1986 to 1994. There was also Fame, Fortune and Romance broadcast on ABC from 1986 to 1987. I briefly remember  Runaway but the later “Fame, Fortune,..” I haven’t the slightest recollection of .

The damn show was very aware of itself. The 80’s were all about being unapologetic and reckless with your cash. Excess and lack of consideration for the waste or lack off were the mode. Style over substance and in some cases just style. The celebrities on the show were no different. I remember on episode, it might’ve been centered around a sheikh, member of royalty or some Tony Stark type 1%er that had yachts and a gold toilet. The toilet was made of friggin’ gold. I was under the age of ten years and , no lie, there were two songs that if they started playing, I would run to the television full- speedforce: 1. The Fraggle Rock theme song and Lifestyles. Now that I’m thinking about it, maybe Married with Children and the Robin of Sherwood theme are up there on that list. The theme music was by Bill Conti titled, “Come with me now” from the film Five Days from Home (1979). Another raging tune that would play either during the opening of the show or wit promos of upcoming episodes is “Runaway” from the 1981 James Bond film ‘For Your Eyes Only’.

If there be a collected Blue-Ray of the series, I want one. It’s so dated and a time capsule of an America obsessed with its own vanity and the style and what was considered, “Cool” need to be preserved in the mental  museums of our nostalgia playsets. Pay close attention the expressions of colors, fabrics, neons, shoulder pads, leather slip-on shoes with no socks, silk shirts and at the end of every episode “Champagne wishes and Caviar Dreams”.

The Lifestyles of the Rich and Famous host died at the age of 76 on Friday, August 24. The Las Vegas Review-Journal, where he worked as a celebrity columnist, reported that he had been hospitalized since suffering a stroke in Cabo San Lucas, Mexico, in November 2017. He had a second and more serious stroke on Monday, August 20. The reporter moved to Las Vegas in 1999 and spent his final years covering local star-studded events. Leach is survived by his sons Steven, Gregg and Rick.

Stay Classy and Elegant and keep your hearts on the Rewind Button.