March may come in like a lion but Mecha Maiko made sure that February 2018 didn’t end with a whimper. Hayley Stewart, former half of Dead Astronauts, accomplishes a lot in her 10 track debut that proves to be infectious, exciting, and introspective pop-infused synthwave. 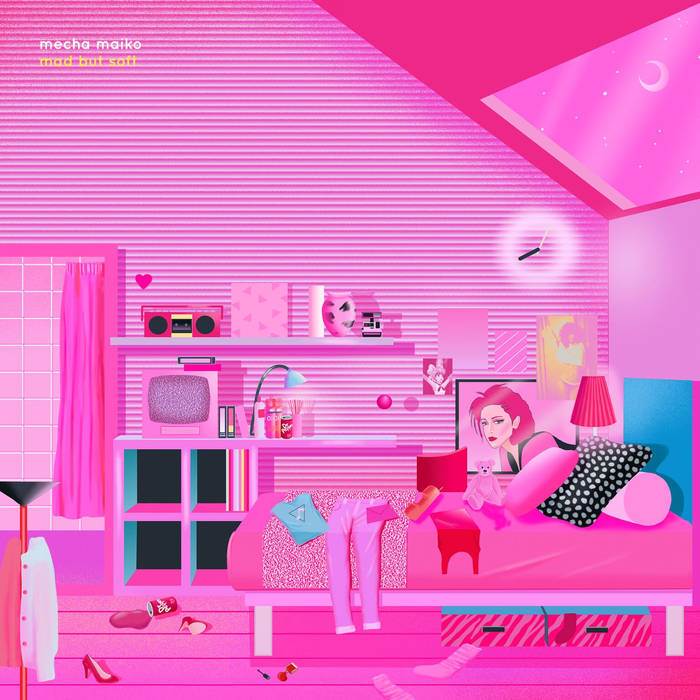 March may come in like a lion but Mecha Maiko made sure that February 2018 didn’t end with a whimper. Hayley Stewart, former half of Dead Astronauts, accomplishes a lot in her 10 track debut that proves to be infectious, exciting, and introspective pop-infused synthwave. Not only is this a noticeably different sound than her former band, but its largely a different sound than anything else in the scene currently. What’s most exciting about Mad But Soft is that it opts for inventiveness in nearly every track. Before half of the album is finished, you’ll probably be thinking you have an early contender for synthwave album of the year.

While this is first and foremost a synthwave record, the way that it blends those familiar nostalgic sounds with the darkness and atmosphere of a group like Purity Ring and the ethereal pop sensibilities of an artist like How to Dress Well or Banks makes for a haunting pop album. Mad But Soft’s opening track “Cold Hard Ground” wastes no time in orienting listeners to Stewart’s sound. For reference, you don’t hear a single non-pad synth for nearly a minute. You don’t hear drums for nearly two. Instead, you are enveloped by the texture of vocals and pads blending, with the delay and reverb-laden vocals forming a similar sonic texture to the droning, washed out synth that lays beneath it. This is an atmospheric track welcoming listeners to an atmospheric album.

Follow-up track “Electric Heat” is noticeably more upbeat, but doesn’t shy away from the brooding and emotionally vulnerable tone that has been established, all while the catchy refrain of “Can you feel my heartbeat?” echoes. The tone of this album is unique. In some respects it has the kind of emotional rawness exhibited on such classics as Trevor Something Does Not Exist, but with a humbler and less cynical perspective. At the heart of both is the sound of heartache. In a lot of ways, the title Mad But Soft is the perfect name for it. This is an emotionally driven record that doesn’t shy away from its own playful spirit. The titular track follows suit by being musically high energy and dance-oriented while the vocals stay melancholy and dreamy.

“Cold”, with its Dana Jean Phoenix feature, is the closest the album gets to standard synthwave, but the strong sense of melody in the chorus keeps it from sounding stale. “Bike Night” slows things back down and serves as one of the best “headphones songs” on the album. It just envelopes the listener in a way that exemplifies the parts of this album that so effectively inspire chills. Closing out the album is the back to back to back creative and experimental wave of songs “Contract”, “False Memories”, and “Auto Fire”, with “Auto Fire” being the best song on the album. In these tracks, the album opts for its strangest synths and its most spaced-out atmospheres, and on “Auto Fire”, the emotional strike of the album is at its high point, and only rivaled by how endlessly catchy the vocal melodies at the center are.

If you are an exclusive fan of darker or more concept-oriented synthwave, this might be hard to get into. The same goes for people who tend to avoid artists that really drench themselves in delay and reverb. For everyone else, and especially for people who like distinctive synthwave that opts to be something different and something authentic, this is going to be a melancholic, catchy, and unique album that will deserve multiple spins. There is a lot to love on nearly every track and it would be shocking if this didn’t wind up on an end-of-year list.