Home / Interview  / The Rise of the Synths – Director Interview

The Rise of the Synths – Director Interview

The Rise of the Synths is a documentary about the synthwave genre, community, and aesthetic. You can watch the trailer and contribute to the Kickstarter here. The entire project looks incredible, with so many talented and important people from within the scene attached to it, and I 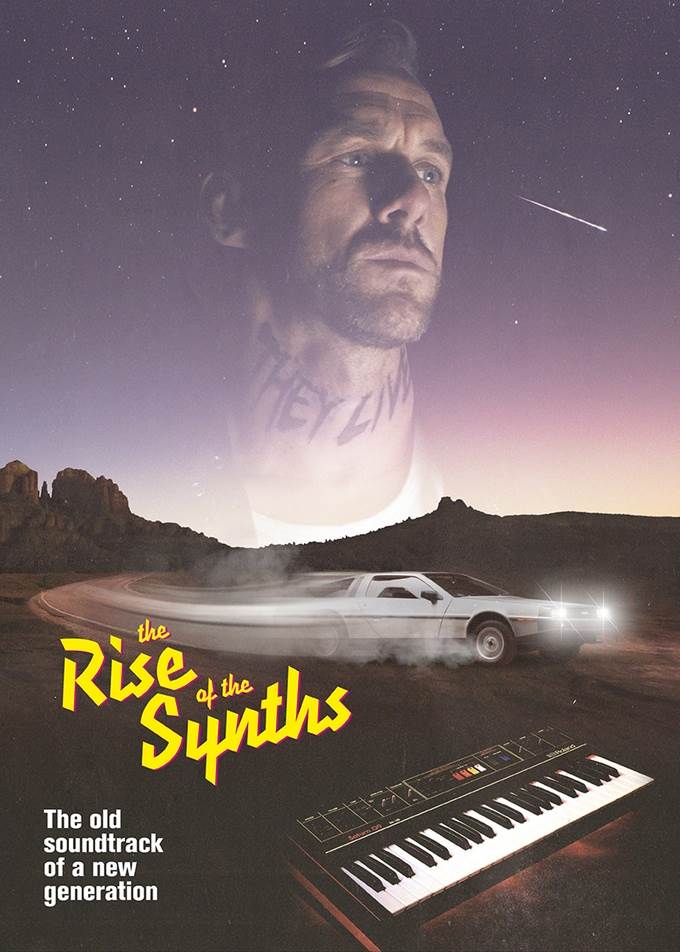 The Rise of the Synths is a documentary about the synthwave genre, community, and aesthetic. You can watch the trailer and contribute to the Kickstarter here. The entire project looks incredible, with so many talented and important people from within the scene attached to it, and I was lucky enough to be able to interview the director, Ivan Castell. You can read the questions and his responses below.

What inspired you to create a documentary about the synthwave scene?

I get this question lately a lot, I assume people find it weird to do a documentary about a niche underground movement, but it just came very naturally to me. I’ve always been interested in music, I played (very badly) guitar when I was a teenager, and I grew up with the 90s MTV, my own visual universe it’s heavily influenced by music videos narrative. My previous documentary titled “Trovadores” (“Trobadours” in english) was a portrait of the underground figure in it’s relationship with its own town. So for me, it’s kind of a natural path to follow.

But for synthwave, it just came by surprise. Three years ago, Ricardo Baeza, a street photographer friend of mine send me a track for putting in a promo I was doing for his “Urbacide” project. I click on the first link and I hear this intro from Cobra (the movie) when Cobretti enters the supermarket and say “I don’t deal with psychos, I put them away”. Then I listen to this cheesy synths and look at the title of the video: “Cobretti” – 80s Stallone. I was like WTF is that? As a 90s grunge guy I felt pure rejection towards it, but as a filmmaker the visuals kept my attention. I didn’t pay too much attention then, but I was at that time working on a screenplay for a feature film, i needed to change the focus, and music is very important for me when I’m writing, it puts you in some particular mood. So a few days later I went back to 80s stallone and related videos, and I started to build a playlist to write along. After two weeks I was sold to this music.

But as filmmaker, what I really found interesting, was the lack of documentation. Three years ago you googled “synthwave” and there was almost nothing to look for in terms of “story”, blank page. And I looked at the number of plays on youtube, bandcamp and so much comments and engagement in the community, that I thought it was more than just a deep web revival trend. And so much mystery and not knowing anything about the artists (faceless, no interviews on video, no pics, etc…) had more appealing to me. I started to look closely to it and tried to document myself. So I started to email some artists, just in case, and three years later here we are.

Who was the first synthwave artist you followed?

What is your favorite synthwave album?

It’s complicated to just pick one, but it’ll probably be “Turbulence” from MN84, as it was the first synthwave album that really grab my attention as a whole. I used to listen a lot in my car and it definitely was a turning point for me in really paying attention to this music seriously. Another of my favs are “Secret diary” by College, “Near Dark” by DWTD and “Calico Noir” by OGRE.

The list of artists you are interviewing is quite expansive. I’m sure it becomes easier and easier to get interviews as the project gains steam, but was it difficult at first?

We’re very proud about our lineup. But at the beginning it was really hard to get them because of the aversion some of them have to media. They prefer to let the music talk, and I understand that’s a huge part of the scene personality, the kind of “anonymous” thing. So I had to build some trust, some confidence. I was very concerned to be considered as a newcomer that wanted to cannibalize their work. I really love this music, I just want to make the world more aware of it. But for the most part, all the artists have been very open, honest, respectful to our idea and have quickly engaged in the project. I’m very thankful for that.

Of course, after the first lineup announcement, it became much easier to involve more artists.

Is this your first time creating a documentary?

Rise of the Synths appears to be a highly stylized experience, blending narrative and documentary. Why choose to create a documentary in this way?

I just don’t like regular on-camera interview types of documentaries. If you’re doing some kind of journalistic approach it’s fine and it’s a safe path to follow. But I don’t do that. I like to try to bring out the inner world of the artists I’m documenting. And sometimes you just need to watch and let it roll. The fiction part came also very naturally. I felt the film needed this cinematic approach and some kind of element that serve as nexus between all of the artists and their own worlds and places. We needed to find a common semantic to all of them, regardless of the language they speak. This music is inspired by late 70s and 80s pop culture, so an anti-hero was an obvious choice. A tough guy, lonely, with a mission: so we created the “Synth Rider” character, the watcher of the Master’s legacy. He’s a metaphor of the grassroot movement, created naturally over a decade through the internet.

Will any retro films be influencing the look of the Rise of the Synths? Which ones?

The list would be endless. “Thief”, “Blade Runner”, “Mad Max”, “Driver”, “Live and die in L.A.”, “The hitcher”, to name a few. But if I had to pick visually one of my main influences for this documentary, I’ll say a mix of Michael Mann and Tony Scott.

The perks on the Kickstarter are awesome! If you were a fan, and not a director, what perk would you sign up for?

“Master” is an amazing perk. If I had to go lower, “Connor” and “Cobretti” are some of my favs. But if I had to pick one, and I was just a fan, I’ll say: wait to see the artists bundles of your favorite artists in our lineup, it’s going to be a very unique thing, a rare opportunity to grab some of their stuff. one of the things I love about this documentary is that the artists are so engaged in the making, they know how hard it’s been for us to try to fund it, and they’re helping us all the way they can. And they’re offering some amazing one-time only things, that will probably will never be able to get otherwise. We have for example two artists that are going to offer their last copy of one of their albums (signed), something that they own because there’s no other physical copy in the world. We’re very lucky.

As the Graphic Novel Editor at NRW, I have to ask. What will the comic book perk entail?

We want to make a very unique thing. it’s on development, but basically it’s the Synth Rider’s story; his adventures in an epic 80s world, protecting the Master’s legacy.

We have been lucky enough to work with David Lopez (who has worked in DC and Marvel) on the draws for the Synth Rider’s poster we’re offering in the perks. We want to continue to work with him in the comic book, and he proposed a suitable narrator, but it’s too early to say more about this. But as all thing involved in this project, we want this to kick ass.

Where do you see the synthwave scene going in the future?

Hard to say, I’m just a filmmaker who fell in love with this music. So, as a filmmaker what I could say, is that a lot of this composers are talented to score feature films. I’ll love to get more scores like “Drive”, “Maniac” “Lost River” or “It follows”. But as a scene, I don’t know, it has evolved a lot since it started, you can hardly keep up with so many new music being uploaded everyday, and the quality rise is unquestionable. I’ll say that some of these bands (that put vocals in their music) could reach some mainstream attention, but I doubt it’ll become mainstream as a whole. It’s a weird music for this modern world, and that’s part of its appeal. I’ll love to hear more of this on the radio, but I don’t see it happening any time soon. But just as a note, some months ago I was shooting a video for an urban art festival, and one of the painters was listening to “Lazerhawk”, I just went to him and said: “Do you like synthwave?”, and he look at me like “wtf are you talking about?”, “it’s Lazerhawk”, I said, and he goes: “Oh, I don’t know the name, I found it in youtube. I just fucking love this shit.”. So I feel it’s reaching far away now.

What is one thing you would like our readers to know if they are on the fence about contributing to the Kickstarter campaign?

Just look at the teaser: it’s just a 2 min. dream of a truly devoted team. And it’s just a teaser shoot on what we had at our reach, so expect something incredible if we make it happen with an adequate funding. This music is passion, there’s no middle point: you love it or you hate it. If you love it, don’t overthink: help us to make it happen, because otherwise a project like this one it’s hardly going to happen anytime soon.

If I had to put something on the table: there’s some iconic names from the late 70s and the 80s that are aware of the project and are willing to be involved if the film is fully funded and goes in production. For a lot of reasons we can’t unveil the names, but you should trust us if I said: you’ll not be disappointed. If people knew, we’ll probably be 50% funded at this point.

We think this scene and this music, and it’s relationship with film (it all comes together) is something deep that deserves more attention. Artists should be labeled as artists, composers, not like a 80s parody jokes. This music from a filmmaking point of view is a blessing. The world deserves to know that, and its real history. In the late 70s some folks created the seed that decades later came to that sound.