(adsbygoogle = window.adsbygoogle || []).push({}); When looking at a modern reimagining of a retro story, it's important to keep a few things in mind. One is that these older television shows, movies, and comics are not without their context. 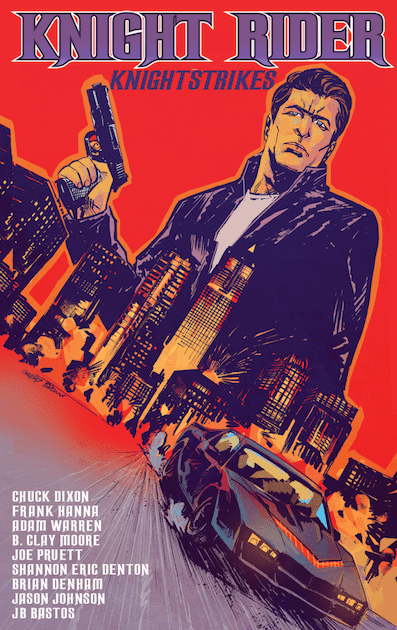 When looking at a modern reimagining of a retro story, it’s important to keep a few things in mind. One is that these older television shows, movies, and comics are not without their context. I was a HUGE fan of Miami Vice Remix, and though I did not watch the source material as it aired, I have watched it after the fact. Miami Vice was good for what it was, but it was mostly just a fun and interesting TV show inherently embedded in the generation that spawned it. In other words, it’s hard to watch or think about without a sense of nostalgia taking over. Knight Rider Vol. 1 and Knight Rider: Knight Strikes are similar to Miami Vice Remix in this sense, and the modernizing of a deeply 80’s world creates a rich and engaging comic experience, particularly with Knight Strikes.

While Vol. 1 is interesting in it’s own right and has some great character moments between Michael and Dr. Katherine Beachum, with the former being characterized like morally upstanding version of Sterling Archer and the latter getting much more depth than her TV counterpart, K.I.T.T. is oddly handled. It makes the famous car seem much more prone to malfunctioning and frailty. I suppose as an origin story, this is passable, but I would have liked to see more of humanity of the original K.I.T.T. present.

Knight Strikes, on the other hand, is remarkable from beginning to end. Rather than having a consistent arc throughout the entire book, it has a handful of episodic self-contained stories. The world the Michael Knight occupies has been updated, both in terms of technology and implied political / criminal activities. It often feels like the story is taking place in a slightly less cynical version of Ghost in the Shell. It honestly does the series wonders. The frequent change-up of artists and writers is not actually jarring as one might expect. You can see similar ideas and aesthetics, but it helps make reading Knight Strikes feel like a consistently fresh experience.

There is something genuine about these modern comic imaginings of retro content that is not present in something like the Robocop film reboot or the mess that is the Transformers film franchise. Knight Rider proves to be a rewarding experience in terms of both artwork and narrative. If you only pick one of the two volumes currently available, without hesitation make it Knight Strikes. Not only were some of the sloppier elements of Vol. 1 fine tuned, but the revolving door of a creative team behind it makes every issue feel fresh, and the world is fleshed out enough that I’m eager to see if the series continues in this post-cyberpunk direction.