FINALLY, THE LIST OF THE BEST RETRO-TYPE MOVIES OF 2015 IS HERE! 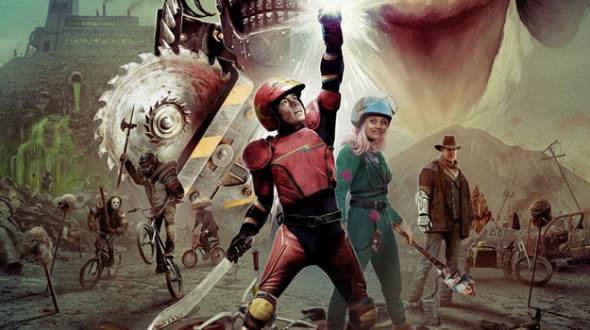 No need to give a description of this movie. The first one was funny and I’m sure this one is as funny. It’s a Seth McFarlane movie, you get what you want – exactly the way South Park broke down the McFarlane funny formula: “Build up + random (80’s or other) reference+ random gag= punchline”… I say don’t take life seriously and laugh it up or become a grumpy frumpy ding dong. Ted 2 stars Mark Wahlberg and MacFarlane, both reprising their roles from the original film, as John Bennett and his sentient teddy bear friend Ted respectively. The story involves Ted fighting for his civil rights when authorities rule that he is property rather than a person, putting him again at risk from his stalker Donny (Giovanni Ribisi). Is there really a downside? I’m a fan of Chris Columbus films but, it’s a Happy Madison film. If you’re an analog fiend like I was with my original ATARI 2600 then you’d be interested in at least peeking at this film. Pixels is a 2015 American science fiction action-comedy film produced by Columbia Pictures, 1492 Pictures and Happy Madison Productions. The film was directed by Chris Columbus. Its screenplay was written by Tim Herlihy and Timothy Dowling, with a screen story penned by Tim Herlihy and based on French director Patrick Jean’s 2010 short film of the same name. The film’s plot has extraterrestrials misinterpreting video-feeds of classic arcade games as a declaration of war, and invading Earth using technology inspired by games such as Pac-Man and Space Invaders. To counter the alien assault, the United States hires former arcade champions to lead the planet’s defense. If you like Adam Sandler movies then, “Go For It”. You don’t? Then try it out regardless or go watch The King of Kong: A Fistful of Quarters. The directorial debut from actor Ryan Gosling that confused and aggravated a lot of audiences almost as much Only God Forgives did. Lost River is a dark fairy tale about a mother struggling to keep her family’s home during an economic crisis; her son who runs around the ruins of his city scrapping from abandoned homes and buildings for a few dollars each time and the people and local folklore that energizes this lullaby from beginning to end. Lost River stars Christina Hendricks, Iain De Caestecker, Matt Smith, Saoirse Ronan, Ben Mendelsohn, Barbara Steele, and Eva Mendes. This debut is ambitious but, shows potential from the actor. I’ve definitely seen worse films this year if not life. I particularly enjoyed his night scenes and the choices in lighting and mood. The soundtrack was produced and scored by Johnny Jewel (Glass Candy, Chromatics, Desire, Symmetry) the owner of Italians Do It Better. I’d give three midnight kisses to this movie. This film contains obvious influences by David Lynch, Michale Mann and Nicholas Winding Refn. A 2015 American 3D computer-animated comedy film produced by Blue Sky Studios and distributed by 20th Century Fox, based on Charles M. Schulz’s comic strip Peanuts. Who didn’t get a little curious and excited about the possibility of a brand new all CG Peanuts film? “Childhoods never die, we just have kids and pass it on the best way we can” Remember coming out of school and running to your local hole in the wall to score the latest anime VHS in only subtitles? Remember when anime was cool? Well the beloved DBZ franchise made a comeback this past year with a new film. Dragon Ball Z: Resurrection ‘F’ is the nineteenth Japanese animated feature film based on the Dragon Ball series and the fifteenth to carry the Dragon Ball Z branding. Resurrection ‘F’ is the second film personally supervised by series creator Akira Toriyama, following Battle of Gods in 2013. The movie depicts the return of the villain Frieza, as well as the God of Destruction Beerus and Whis from Battle of Gods. Released worldwide and free of commercials and bumps with a runtime of less than two hours; yes, under two hours; so there won’t be any two week spirit bomb buildup here. The internet sensation that earned a helluva a lot of fan support and earned airings at film festivals and multiple social media sites; occasionally replaying on Robert Rodriguez’ El Rey network to this day, Kung Fury was written, directed by, and starring David Sandberg. It pays homage to 1980s martial arts and police action films. It was selected to screen in the Directors’ Fortnight section at the 2015 Cannes Film Festival, losing to Rate Me from the UK. For any further details about Kung Fury you can go and watch this more than worthy film or read my “The Aftermath” reaction/review of the film right here on New Retro Wave. Released in May of 2015, Heaven Knows What isn’t a clear and cut retro throwback movie but, I’m telling you it is. It’s a brilliantly shot throwback to the classic junky & junky love stories and day in the life character studies about urban life on the skids us cool kids grew up watching like Panic In Needle Park (1971), KIDS (1995), Less Than Zero (1987), Drugstore Cowboy (1989), Bright Lights Big City (1988). Directed by Ben Safdie and Joshua Safdie and written by Ronald Bronstein and Joshua Safdie. The film stars Arielle Holmes, Buddy Duress, Ron Braunstein, Eleonore Hendricks, Caleb Landry Jones and Yuri Pleskun. It is based on Holmes’ unpublished memoir of her life as a homeless heroin addict living on the streets of New York City. From naturally lit scenes on the streets of New York City’s Upper West Side to night time interior shots with beautiful neon hues of blue and red. This film is almost bare nude to the marrow with its honesty and portrayal of life on the street and the mundane routine of street kids looking for kicks and the next fix. Very dark and poignant. Basically anything positive I can say about The Turbo Kid can be read in my movie review of this film on New Retro Wave. The story was cute and full of heart. The characters weren’t cookie cutter. Michael Ironside is welcomed on-screen at any time. The film stars Munro Chambers, Laurence Leboeuf, Michael Ironside, Edwin Wright, Aaron Jeffery and Romano Orzari. Basically, I loved this film. It was very funny and entertaining. This is late 2014/2015 release that gave us all hope after years of James Wan and Rob Zombie films. It Follows is the story of a group of teenagers being hunted by an unknown supernatural force that kills promiscuous adolescents. The film was soaked with influence from John Carpenter films, especially Halloween. On review aggregator website Rotten Tomatoes, it holds a 96% “Certified Fresh” approval rating with an average score of 8.2/10, based on 194 reviews. The soundtrack and visual direction in every scene compounded mood with tension creating anxiety and suspense as the events unfolded and the terror haunted each victim (or carrier) down the line. It Follows stars Maika Monroe (The Guest), Keir Gilchrist, Olivia Luccardi, Lili Sepe, Daniel Zovatto, Jake Weary and Bailey Spry. Music by Disasterpeace and directed by David Robert Mitchell. Possibly the best movie on a lot of top ten lists at years end is without a doubt George Miller’s return to the wasteland with the rejuvenated adventures of Max Rockatansky. Filled with practical effects “up the wahzoo” and CG-effects focused only on backgrounds and subtle visuals, this film was an updated throwback to the days of actual stunts and realism.  The story, like every other Max film, revolved around the people living in the wasteland seen through the eyes of our anti-hero. Top action scenes and top speed storytelling; straight to the point and no fuss. Mad Max: Fury Road stars Tom Hardy and Charlize Theron. Directed by George Miller.