Directed and written by Adam Brooks and Matthew Kennedy. This isn’t just any cookie cutout comedy slasher film because its equal parts an homage and parody of the entire Italian giallo genre. 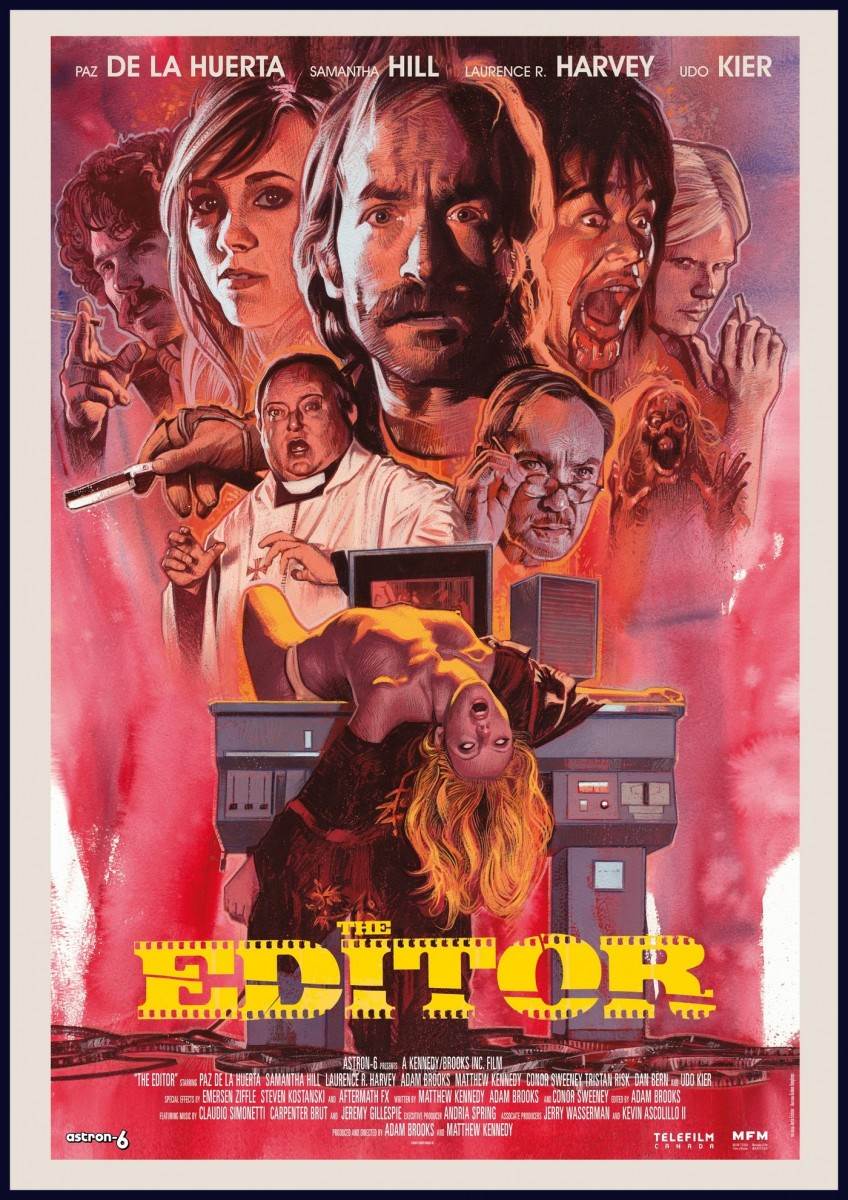 There are words that drive a dull nail up your spinal cord and make me wish I drank the pipe cleaner instead of my morning coffee. One such word is “homage”. Homage the recurring excuse for a lack of spark in ones noggin and the ultimate excuse people will give you to justify the mess that is Cabin in the Woods. Homage explains the recent garbage flowing from the mouths of people who just want to see the same things reused and repackaged with a different paint job over and over again in todays consumer pandering films. So when I found 2014’s The Editor, I was hesitant to even start viewing.

Fortunately for me this didn’t inspire a murderous rage or head splitting headache under the sling blade I at times swing wildly like Mark McGuire at audience members every time I watch a horrible film. In fact I liked this movie. I actually liked The Editor.

Directed and written by Adam Brooks and Matthew Kennedy. This isn’t just any cookie cutout comedy slasher film because its equal parts an homage and parody of the entire Italian giallo genre. Giallo – is a 20th-century Italian slasher genre of literature and film. In Italy, the term simply denotes thrillers, typically of the crime fiction, mystery, and horror subgenres, regardless of the country of origin. In English-speaking countries, however, the term “giallo” is used to refer to a particular style of Italian-produced murder mystery film which often includes elements of horror fiction and eroticism (similar to the French fantastique genre).

Without spoiling the plot – a well-known and talented film editor is hard at work on the next great slasher film. He is four fingers shy of a shadow puppet convention and his life is falling to pieces. His wife is a mental case and his only obsession is his craft. Until a series of murders starts halting the production of his new movie and all clues are pointing at him. Greatest part of the film is the complete lack of snobby film making. We know it’s a parody; we know it’s a comedy. The jokes are perfect little exploitation gems. The makeups FX are actually really good. Imagine a mix between a Mad TV bit with some Garth Marenghi’s Dark Place, Kids in the Hall and a dash of Looney Tunes. It manages to poke fun at not one but multiple giallo films in every shot while, simealtaneously providing a blood soaked whodunit that’s, well, quite decent. You’ll see “homages” to Mario Bava, Lucio Fulci, Dario Argento and Lamberto Bava. It’s the comedic alternative to what Hélène Cattet and Bruno Forzani are doing with the genre by redefining and pushing limits with films like AMER (2009) and the haunting hallucinatory The Strange Colour of Your Body’s Tears (2013).

You can check your local on-demand pay per view channels to see if your provide is carrying the film or check for local screenings or online.

Long story short : Go check it out and keep your fingers off the butcher knife and on that rewind button.