Yo! Since it is June and I know your dusting off your “Girls, Just Wanna Have Fun” singles for Gay Pride; I’d like to make my own, somewhat, dedication by talking about a series from way back in the day 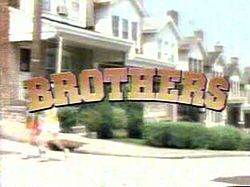 Yo! Since it is June and I know your dusting off your “Girls, Just Wanna Have Fun” singles for Gay Pride; I’d like to make my own, somewhat, dedication by talking about a series from way back in the day and years before NBC’s Will & Grace.  I’m talking about Showtime’s original series BROTHERS.

After being rejected by all of the networks, David Lloyd (writer on The Mary Tyler Moore Show, Taxi and Cheers) was approached by Showtime to air his pilot as a series on their new pay for cable network. The premise of a working class family coming to terms and coming together after a sibling comes out of the closet was just the sort of daring television that Showtime was looking for.

The official synopsis of BROTHERS is: Set in south Philadelphia, Brothers centered around the lives and relationships of the Waters brothers; oldest brother Lou (Brandon Maggart), a somewhat uncouth, but well-meaning construction foreman, middle brother Joe (Robert Walden), a retired placekicker for the Philadelphia Eagles and owner of a sports bar called The Point After, and the youngest brother, Cliff (Paul Regina), an aspiring chef.

In the premiere episode, Cliff shocks his family when he runs away from the altar on his wedding day. Instead of getting married, Cliff reveals to his family that he is gay.

The series would go on to deal with issues of sexual identity, love, dating, discrimination, stereotypes exc. But overall it was about people navigating personal relationships.

The series was nominated for numerous Cable ACE awards during its 115 episode run. The only win belonging to Philip Charles Mackenzie for Best Actor in a Comedy Series. Now go on and enjoy the video link below and binge watch the other episodes while they are still there; you can find each season on playlists created by fans on youtube. So stay classy, stay retro and keep your manicured fingers on that rewind button.