While this type of article will probably not be as frequent as I would like (because reading can be time consuming, yo), I will be occasionally sharing reactions, reflections, and analysis of popular novels set in or about the 1980's. I don't think there is 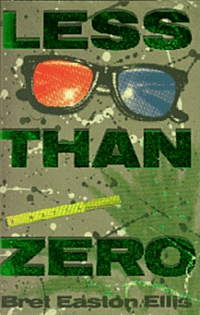 While this type of article will probably not be as frequent as I would like (because reading can be time consuming, yo), I will be occasionally sharing reactions, reflections, and analysis of popular novels set in or about the 1980’s. I don’t think there is a more deserving novel to kick this off.

In hindsight we often remark how certain novels capture the entire spirit of the time period in which they are written.  The Great Gatsby does this to the Roaring 20’s. The Grapes of Wrath does this for the Great Depression. While the 1980’s had a wealth of excellent literature, few captured the spirit of entitled ennui found in the decade’s more trangressive moments quite like Bret Easton Ellis’ debut novel Less Than Zero (named after the Elvis Costello song). The novel was published in 1985, when Ellis was 21 and still an undergrad. Yeah, it makes me feel great about my accomplishments too.

Clay tells us in the novel that he wants “to see the worst”. Taking the reader along through a post-modern wasteland of listless hedonism and superficial desires, we see the worst with him. The first-person narration coupled with the (mostly) present tense of the novel allows Clay to feel like a character we know intimately while also being completely enveloped in the nihilism of his world, our world.  He is home in LA during winter break from his New England university.

After reading the book I’m wracking my brain to think of a character who does not partake in some form of controlled substance abuse. I’m coming up blank. I’m pretty sure every named character (and quite a few unnamed characters) is high at least once, and often several times. This isn’t gradual. Clay’s cocaine use is evident early on. A number of people whom he interacts with act as some form of supplier or enabler to his behavior as he does to their behavior.  This leads to a downward spiral to the depths that people can sink. We “see the worst”. We watch the horrible realities of snuff films, prostitution, and human trafficking with the queasiness and disgust that Clay feels, though his morbid curiosity manages to get the better of us as readers.

The book has been extremely loosely adapted into a film. Andrew McCarthy plays Clay, film-version-Clay is on a quest to save his friends from their dependencies, something which novel-version-Clay only does to one character in the most desperate of inescapable situations. The movie is good, and certainly enjoyable as its own entity, working best if you imagine it as a film that has the same setting, title, and character names by pure coincidence. It lacks the impact that the novel carries. If you haven’t read Less Than Zero, I strongly encourage you to do so. Despite its age, it still feels new. It feels as though it would have been just as believable as a recent novel looking back at the 1980’s with the same warm intrigue as the writers and artists at NRW. The book has such a fast pace, to the point that even people who don’t read much can easily enjoy it.