When thinking about the aesthetic of the 1980's (which we do often, admit it!), it doesn't take long until you land on Miami Vice. The clothing, the music, the neon.  Many people who are not familiar with the series itself will almost instantly know what 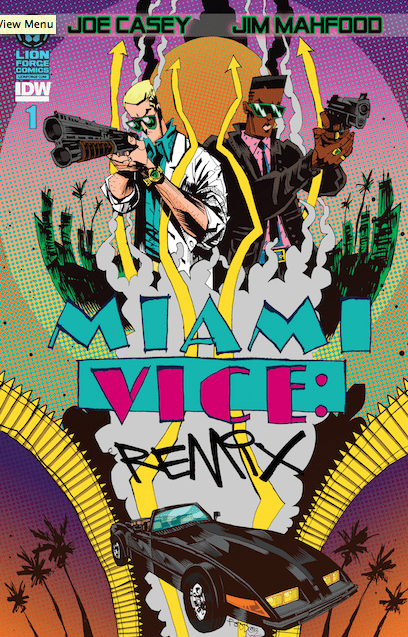 When thinking about the aesthetic of the 1980’s (which we do often, admit it!), it doesn’t take long until you land on Miami Vice. The clothing, the music, the neon.  Many people who are not familiar with the series itself will almost instantly know what you are talking about if you bring it up. This is for good reason, as the show was a neon-infused adrenaline shot to the heart of television at the time. Though if you watch the show on Netflix, you may be surprised it is more restrained and subtle than you may have been expecting.

Miami Vice Remix is a 5-issue series from IDW Publishing by Joe Casey and Jim Mahfood. The art style of Remix very quickly establishes its identity as something unique and not an uninspired reboot. The harsh edges and angles evokes German Expressionism of the 1920’s, albeit bathed in a lush neon glow. It makes the setting appear simultaneously modern and retro, but never appears redundant.

The story follows the ethos of the artwork and moves at a blistering pace. While it may seem a little erratic at times, or like you are given a lot of names in a short period of time, it works well in context and is supported by the art. The narrative doesn’t hold the reader’s hand. I was extremely thankful for this, as that sort of attenuating of narrative details or a story’s world lowers reader expectations and is honestly condescending. Just as the art is bustling, the story is bustling, and that’s fine. That’s Miami. That is the world this story lives in. The plot itself is intriguing and involves the same characters from the show in their undercover roles confronting “Miami Bath Salts”-addled zombies, no doubt influenced by the cannibal attack in Miami back in 2012.

This may not be Miami Vice for people who are expecting a direct adaptation or continuation of the TV series, but it is Miami Vice for the Drive-generation of neo-80’s nostalgic future lovers. And isn’t that just thrilling?

Note: The next Miami Vice Remix review will cover #2 and #3. Then it will be as released.