Retro Movie Review: Splendor (1990) Greg Araki was a key contributor to the buzzing New Queer Cinema movement of the 1990s. Born in Los Angeles and raised within the Santa Barbara city limits, Araki after completing college with a MFA began his film journey with the

Greg Araki was a key contributor to the buzzing New Queer Cinema movement of the 1990s.

Born in Los Angeles and raised within the Santa Barbara city limits, Araki after completing college with a MFA began his film journey with the low budget Three Bewildered People in the Night (1987) and The Long Weekend (O’Despair) before filming and completing The Living End (1992). All of them receiving praise from Independent film audiences and critics. Three Bewildered People won the Bronze Leopard, Young Cinema Award at Locarno.

Both films receiving mostly positive reviews and receptions. However, most people and surface breathing film critics dismissed them as shallow:

I don’t agree with the late Roger Ebert, I mean this is the same man who didn’t like Blade Runner (1982), Hocus Pocus (1993), Death to Smoochy (2002) and some more. I look at it from the angle that Greg Araki was just a victim of perhaps being ahead of his time.

Regardless of the naysayers after completing his trilogy Araki made his most optimistic film to date.

Splendor is a romantic comedy about a functioning love triangle starring (then real-life girlfriend) Kathleen Robertson, Johnathon Scheach and Matt Kessler. Once again set in California and involving young adults. This is probably his most accessible film to viewers. Kathleen, Kessler and Scheach are relatable and charming and once your mundane, conventional and lace curtain presumptions of “what a relationship is” takes the backseat you’ll really end up enjoying the film. I did. I always have. This was a movie I always put on for girlfriends to watch and chill. Robertson captures your attention with her scene devouring presence and heart. Meanwhile, her Prince Charming’s played by Kessler and Scheach win you over faster than a pigs pussy tastes like SPAM. 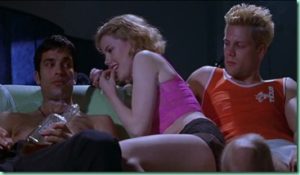 Here is an excerpt from a Filmmaker Magazine, interview with Greg Araki Archived (2011-08-14) at the Wayback Machine:

The film is watchable on YouTube. Just click on the link below and acknowledge that you are a human being. Keep it cool and stay safe out there in the wastelands of America. And remember to always keep your finger on that REWIND BUTTON.
Splendor (1999) directed by Greg Araki
Movie Link – https://youtu.be/I21cqgxdfgo