Time for a free writtten review of the new SUICIDE SQUAD film. Free writing has traditionally been seen as a prewriting technique in academic environments, in which a person writes continuously for a set period of time without worrying about rhetorical concerns or conventions and

Time for a free writtten review of the new SUICIDE SQUAD film.

I tuned in for the hell-of-it. I pressed play on my Roku TV and sat back in my musky bathrobe and watched a film that i was guaranteed to be a big pile of Dino-shit. Unfortunately, I was wrong. It was actually a really good movie.

I hated the previous Suicide Squad and there has been no opposing perspective or interpretation or violin chords on social media from David Ayer that can convince me otherwise. It was a rainy day in NYC and I was on a date with my A-Alike when we decided to go see Suicide Squad 1 at the cinemas on 14th street off of Union Square. We had arrived late and instead paid to see Hell or High Water; a very good film that I recommend people seeing. We were impressed with our choice and saw that the next Suicide Squad screening was starting – so, we sneaked in. I nearly scratched up my forearms trying to fish 3-D glasses out of the return box. We sat and watched the movie. After forty five minutes, I looked over at my A-Alike and said, “What the fuck is happening?”

Back to the Future: and there I was watching the new Suicide Squad movie in 2021. I was enjoying myself. I knew what was happening. I was involved. I was entertained. I was invested in these characters and their personalities that were given material and room to inhabit this DC universe.

Idris Elba is always good in any role (FACTS), Margo Robbie gives a fantastic Harley Quinn performance, KING SHARK voiced by Stallone is the fan favorite online but, to me he was just good- memorable but, just good. Polka-dot man – thumbs up. John Cena is definitely one of the big performances in this film. But, that damn Sebastian the rat was my favorite. I’m a softy for cute fury things – especially the ones that are reviled by society: wolves, rats, raccoons, specifically.

My reaction to the film is positive. I didn’t mind the runtime because, it wasn’t that long. After fast forwarding through the Justice League directors cut, this runtime was a relief.

The action is good, the jokes hit and the cinematography is aesthetically pleasing. James Gunn knows how to write unknown, throw away characters and ensemble pieces with a good eye and imagination for lush, at time absurd, fun and action. The film has a beginning, middle and end and that’s all i wanted. Oh, and salute to Viola Davis for portraying Amanda Waller and awesomely in this film. When she loses her cool and fires out obscenities at our (anti)heroes, I was screaming “TELL IT, WALLER!!”

iT’s a fun film and deserves the flowers and positive reviews from viewers and critics like myself. Thumbs up. and my finger on that REWIND button.

The Suicide Squad is a 2021 American superhero film based on DC Comics featuring the team Suicide Squad. It was written and directed by James Gunn and stars an ensemble cast including Margot Robbie, Idris Elba, John Cena, Joel Kinnaman, Sylvester Stallone, Viola Davis, David Dastmalchian, Daniela Melchior, Michael Rooker, Jai Courtney, Peter Capaldi, Alice Braga, and Pete Davidson. In the film, a task force of convicts known as the Suicide Squad are sent to the island nation of Corto Maltese to destroy evidence of the giant alien starfish Starro the Conqueror. 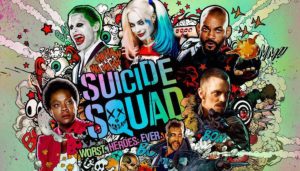