Home / Cornerstone  / No, Synthwave is Not Dead

It all started back in 2019 with a simple clickbait headline from Iron Skullet. The title read, “Synthwave is Dead. Long Live Synthwave.” Note that I do think the article was well written and thought out, but it’s the overall title and conclusion that is the issue.

It’s a common phrasal template you’ve probably heard before, in articles like “Vaporwave is Dead, Long Live Vaporwave,” from 2016. Decades before that we heard “Punk is Dead” and “Disco is Dead,” and on and on. (Ironically, the saying originates from “The King is Dead, Long Live the King,” to essentially announce the accession of a new king or queen – and the continuation of the monarchy.) But I digress. 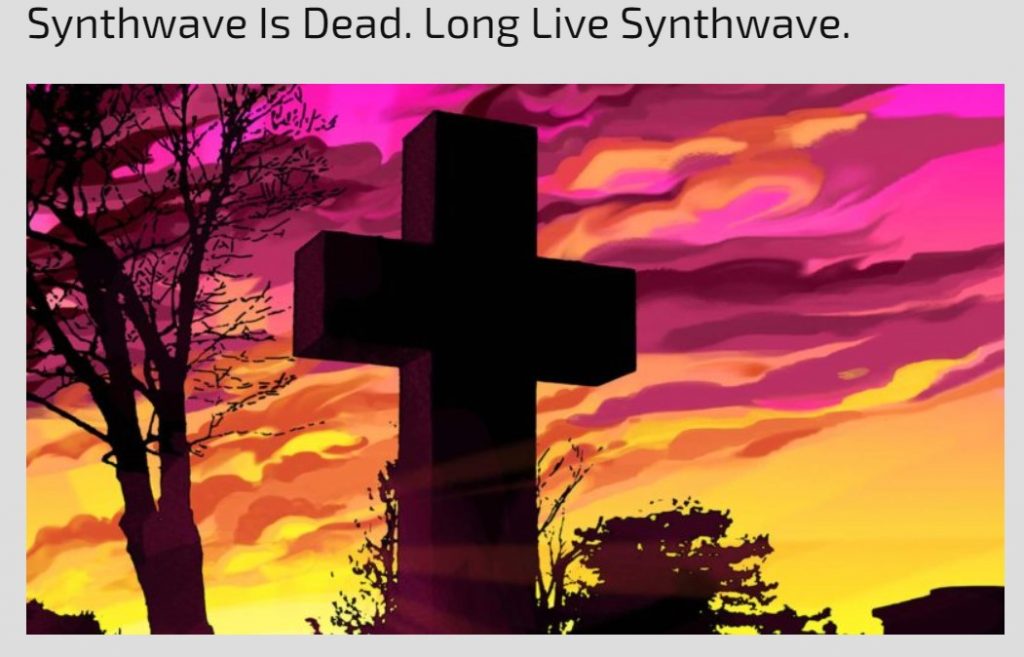 More recently the title of a Metal Hammer interview with Perturbator echoed the same saying… even though at no point during the interview did Perturbator say that anything was dead. In fact, he explained that although he’s branching out from the synthwave genre, it’s an ingrained part of his sound.

“I pretty much told myself, ‘Don’t try to sound like synthwave’, but I cannot completely remove it from my music. There’s always going to be this DNA of synthesisers… “

Honestly, it’s totally understandable why those writers chose that phrase for their titles. Announcing something is dead is a surefire way to draw attention – especially so in today’s age of breakneck-fast article skimming.

We writers have to claw ourselves up the muddy shores of the internet from a sea of obscurity on a daily basis. And make no mistake, I don’t fault them for that at all, and I’m guilty of a few clickbaity titles myself. While I do disagree with the content Mr. Skullet’s article (we’ll get to that later) and Leivers’ choice of title for the Metal Hammer interview, they are both very knowledgeable writers in their own regard.

So why do I feel the need to say Synthwave isn’t dead two years later?

In the growing age of Search Engine Optimization, headlines like this can frankly be dangerous. The all-powerful algorithm decides who sees what, and when an article is popular it gets pushed higher up the food chain, meaning many more people see it. Ironically, because so many people shared the Skullet article to disagree with it, those increased clicks pushed it straight to the top until the first thing you saw when you searched for synthwave was its eulogy.

Big G’s top featured snippet (Those questions you see when you search for something) about synthwave was also, “Is Synthwave Dead?” followed by a “Yes.” The clickbait headline had worked all too well – and now many newcomers to the synthwave genre are leaving the party when it’s just getting started.

Note: These rankings have very recently changed because Mr. Skullet rebranded his website damaging his rankings – but rankings usually do recover after a short period.

Anyway, that’s totally bogus. It’s not good for the fantastic artists making a living (or even side-income) from their work, their managers, or for the wide host of labels who represent those artists. It’s bad for the many synthwave artists gearing up to tour after the close of the pandemic, and it’s bad for promoters trying to throw synthwave shows. It’s just flat-out harmful to the scene, just like it was harmful to the vaporwave scene or the punk scene or whatever. I don’t want to be preachy or bash anyone, but it needs to be said.

As dumb as it sounds, negative clickbait can be dangerous.

Now, aside from the search rankings alienating new fans – on to the main feature.

No, of course Synthwave isn’t dead. Genres don’t die, ever really. They evolve. Even with that evolution aside, Synthwave is literally more popular than ever. According to Google Trends, synthwave reached it’s highest popularity ever in 2020 – a full year after the article declaring its demise was published. 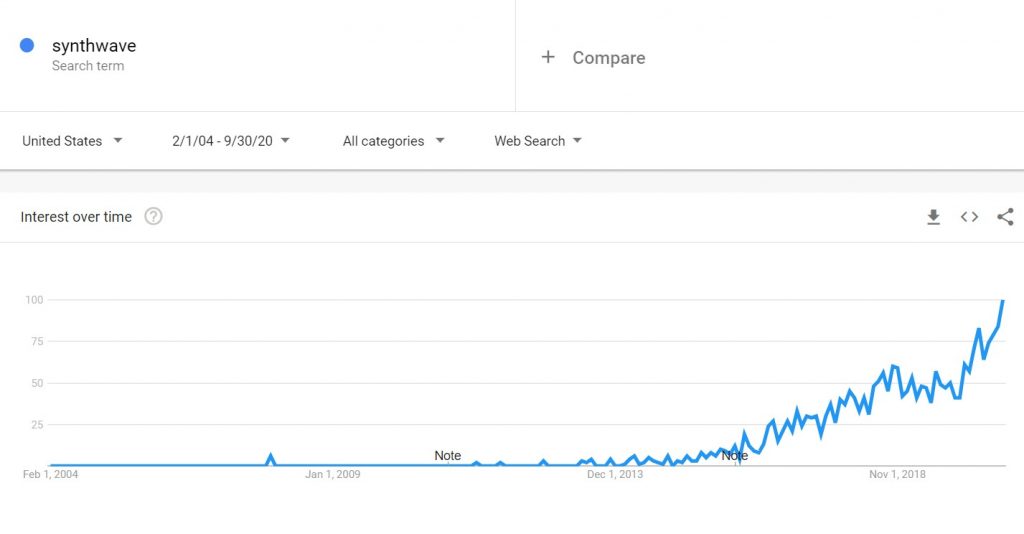 Right now, even six or seven years after its own “death” fantastic new vaporwave is still being released over at Business Casual, AMDISCS, DMT Tapes, Dream Catalogue, and more. The list of labels goes on and on – and it’s the same for any “dead” genre, really. With the advent of the internet and netlabels, we’re moving into a time period when new music from every genre is easily accessible, and new genres are being created faster than ever.

Mr. Skullet understood this, of course, and even made the same point in his original article:

“Synthwave has grown from a niche underground genre into a low-key cultural phenomenon, pulling in a host of modern influences and finding its way into major motion picture soundtracks… hundreds of others in Indie Pop, EDM, Alt Rock, and mainstream Pop incorporate its retro synth sounds into their creative approach and have erased the boundary lines in the process. At the start of a new decade, Synthwave is already bigger and far more popular than ever. For those willing to embrace the changes, Synthwave is not only alive and well, but thriving.”

So, why did he announce that it was dead in the first place?

From my read, the original article made three key points. To be honest, I think they’re all at least partially true, but arrived at the wrong conclusion when gathered together. I’ve listed them below along with some refutations, but I do want to note again that while I disagree with Mr. Skullet’s conclusion, I do very much respect his opinion and writing.

◙ Sturgeon’s Law is an old adage stating “90% of everything is garbage.” I hold this to be very true. As synthwave has grown in popularity and more artists have begun producing it, there is frankly just so much more “average” synthwave to weed through. But I totally disagree that no one is making good ol’ fashioned OG synthwave. “Wanderers” by The G, just released less than a month ago, is a perfect example. There are artists still creating great synthwave with that original sound – they’re just harder to find.

2. Synthwave has become mainstream, with big music artists, films, and tv shows aping (imitating poorly) the sound and aesthetic. Popularity has killed it.

◙ This is very true, but not necessarily a “bad” thing. As much as it leaves a bad taste in my mouth when corporate production studios steal our homegrown aesthetic, it really helps spread awareness of the genre. After all, the major film “Drive” helped launch the synthwave genre altogether anyway.

The original “Vaporwave is Dead” article leaned on this idea heavily – but that was primarily because Vaporwave was partially created to mock advertisements and corporatization. As different brands ironically began using the vaporwave aesthetic to peddle their wares, it was easy to see where the genre lost some of its mystique. However, synthwave is a genre heavily rooted in the excesses of the 80s, so large companies using synthwave to advertise actually fits perfectly with the synthwave aesthetic instead of spitting in its face.

◙ Another common trope among all genres and subcultures is that when they become popular they “die.” Frankly, I think that this idea is really backwards and gatekeepy. Sure, there’s more “bad” synthwave to sort through, but we should always be accepting of new fans instead of going “Oh that? I was into that years ago.” Disliking things simply because other people like them is not really “cool.”

3. Many new synthwave releases are branching out into newer, different subgenres. New synthwave just doesn’t sound like the OG synthwave.

◙ Again, this is true – but this is a good thing. Synthwave has grown from a micro genre into a full-fledged genre with its own subgenres like darksynth, chillsynth, and many more. More innovation and growth is always GOOD thing.

So, to close out this article, No, synthwave is not dead. It’s alive and well.

Even though it will eventually fade from popularity, as all things do, its mark on music as a whole will continue to echo forwards through time like ripples in a pond. Rest assured there will always be someone, somewhere, creating great synthwave (or, in the very least, one of its subgenres.)

“That is not dead which can eternal lie, And with strange aeons even death may die.”