Naked Lunch is the live-action adaptation of the infamous William Burroughs 1959 novel of the same name, directed by David Cronenberg and distributed by 20 Century Fox. The book was banned in Boston in 1962 due to obscenity (notably child murder and acts of pedophilia), making

The book was banned in Boston in 1962 due to obscenity (notably child murder and acts of pedophilia), making it among the last works to be banned in that city, but that decision was reversed in 1966 by the Massachusetts Supreme Judicial Court. It was also banned in Los Angeles and several European publishers were harassed.

The film like the book follows Bill Lee (alter-ego of William Burroughs) an urban exterminator evading authorities as he flees from authorities on his travels as he deals with a drug addiction and a talking typewriter. Bill is introduced to different characters on his travels and the film becomes more surreal and subversive as it marries events from the book with real life events from Burroughs’ own life. A film best served by its director and its ensemble cast: Peter Weller, Judy Davis, Julian Sands, Ian Holm and Roy Scheider all delivering genuinely absurd and sleazoid characters. 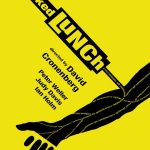 Foul language, offensive behavior, violence, sadism and drug addiction (heroine, hashish, oxycodone) all displayed in their proper harsh lighting serving as instruments in a splatter-surrealistic and non-linear collage of vignettes and parallels between the real life author and William Lee the exterminator.

“Did I ever tell you about the man
who taught his asshole to talk?
His whole abdomen would move up and down,
you dig, farting out the words.
It was unlike anything I ever heard.
Bubbly, thick, stagnant sound.
A sound you could smell.
This man worked for the carnival,you dig?
And to start with it was
like a novelty ventriloquist act.
― William S. Burroughs, Naked Lunch

Let’s give Peter Weller his praise. He’s actually a much deeper actor than people give him credit for. For a better appreciation of this go and search for his interviews and commentary of any of film and you’ll understand a person that fleshes out characters and doesn’t just memorizes scripts. Here, Weller, gives a straight-faced portrayal of a detached man in a weird world while embodying the essence of Burroughs himself.

In his review for The Village Voice, J. Hoberman wrote, “Cronenberg has done a remarkable thing. He hasn’t just created a mainstream Burroughs on something approximating Burroughs’s terms, he’s made a portrait of an American writer”. Jonathan Rosenbaum in his review for the Chicago Reader wrote, “David Cronenberg’s highly transgressive and subjective film adaptation of Naked Lunch … may well be the most troubling and ravishing head movie since Eraserhead. It is also fundamentally a film about writing – even the film about writing”.

Naked Lunch gets an approval from me. So, sit back, enjoy and always keep your finger on that REWIND button.