Only a month or two after forcing myself through the Snyder Cut of Justice League, I tuned into Netflix to watch the latest Zack Snyder film.  It must be an exciting time to be a subscriber to Netflix, right? After working all night and to be

Only a month or two after forcing myself through the Snyder Cut of Justice League, I tuned into Netflix to watch the latest Zack Snyder film.

It must be an exciting time to be a subscriber to Netflix, right? After working all night and to be able to finally relax on my sofa and watch a movie should be the easiest, most relaxing, part of my nocturnal work week. Well, it was. It was relaxing- however, I barely remember the movie. 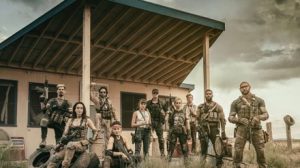 Army of the Dead is an easy to digest schlocky buffet of shit that drags itself across the carpet for two and a half hours. Two and a half hours. Why does Zack Snyder insist on filming these overblown behemoths? Does anyone know a competent editor he can hire? It is one thing to have a long movie with a well-drawn out story with character development and arcs sprinkled in-between well staged action sequences and build-up to a climax. But, when your film is just a patch work of different characters played by an ensemble of actors with camera work that resembles a Showtime series instead of a film by a polarized Hollywood director – You get my frustrations with Army of the Dead.

It was a film that took all the clichés that people dislike about Snyder’s films and threw them together into a gumbo of pop culture – cheese.

Dave Bautista is a good actor. I think he’s a damn good actor with a lot of range and charisma. I’ve seen him in a lot of roles that showcase his range. However, part of his appeal is his eagerness to have fun with new characters and projects without any celebrity pretentions and with lots of humbleness. This film doesn’t make me a fan of his because; I was already a fan.

What’s the film about?: A group of mercenaries are hired by a wealthy man to enter into a quarantined Las Vegas after a zombie outbreak. The whole city is walled in by Storage containers. The wealthy man wants this ragtag band of misfits to break into a Vegas casino before the U.S. government drops a bomb on the whole city.

Does the gang get the money and fortune & glory? Fuck No. Everything goes to shit.

Questions:
How do zombies actually conceive a child?
Is this like a miracle baby? Or did the Alpha zombie force himself onto a woman before she was transformed into a zombie?
Does a zombie even get hard?
Does a zombie even defecate?
If there are evolved zombie or intelligent zombies – How come they haven’t figured out how to break out of the city?
Can you survive inside a Vegas vault while a nuclear bomb goes off? I don’t know.. …
Why does this film feel like I’m watching James Cameron’s ALIENS?
Will I watch another Zack Snyder film? Probably, yes.

I was given more questions than answers and I could’ve been in bed. Watchmen is still his best film followed by Dawn of the Dead (written by James Gunn), 300, Man of Steel, Legend of the Guardians.

Basically, I can’t rate this cuz, I barely remember it; or do I?
Army of the Dead gets a vague Rating of 2 out 5.

Keep your cool, and keep your finger on that REWIND button.

And don’t forget NATURAL CITY is still available at SamHaiNe.bandcamp.com