As a girl that has held a deadly coral snake and lived to tell the tale, the album cover of what appears to be a venomous viper truly lured me in. The monster movies of old come to mind, and the horror of a nuclear-sized 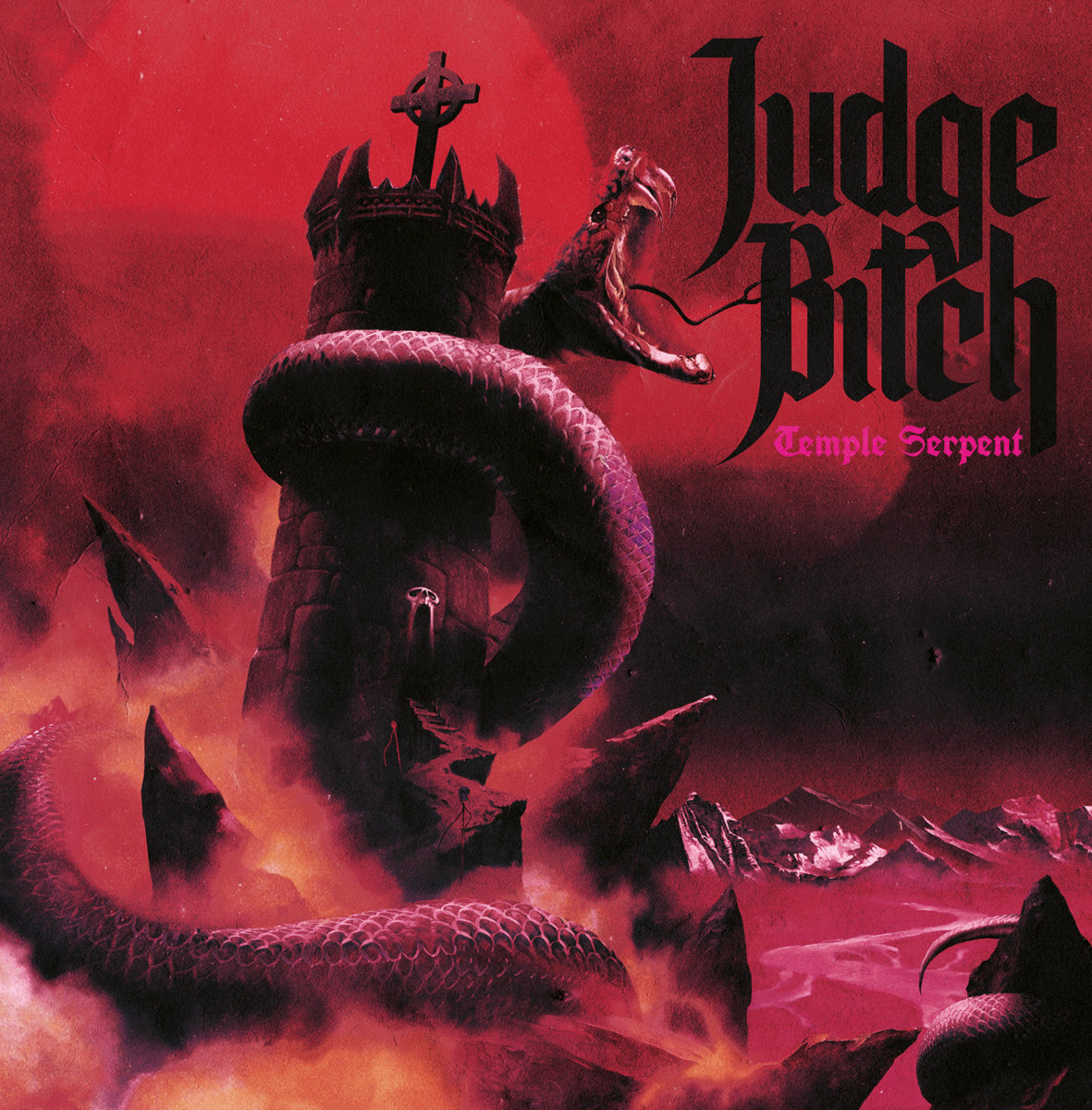 As a girl that has held a deadly coral snake and lived to tell the tale, the album cover of what appears to be a venomous viper truly lured me in. The monster movies of old come to mind, and the horror of a nuclear-sized kaiju or otherwise normal-looking animal attacking a large structure is and forever will be burned into mind, thanks to Hollywood favorites. That being said, the cover art and the name Judge Bitch alone is overwhelmingly inviting, and of course, I had to take on the task of listening through it, unbiased and unphased.
Please listen alongside and read over this full-length review for Judge Bitch’s “Temple Serpent” and leave your own perceptions of the album within the comments below if you feel compelling to make your own opinions known!

Kingsnake:
Leading with a rather impactful guitar segment, “Kingsnake” lures us into the world of Judge Bitch. Much of what this track provides are electronic qualities that are very game-like to me. The delicate chimes in the background facilitate a gentleness that resides on the precipice of the next guitar rift. This creates a catalyst of a chord progression that illuminates my first impression, which so far, is pretty good!

Eternal Champion:
This song starts off with a trailing lead that intensifies over time, suddenly the bass is masked over by the guitar. By the time the synthesizer kicks in, it is obvious what is artificial and what’s real. This is the time to reminisce over 80s action movie vibes that we’ve long forgotten.

Thunder Warriors:
I love the sinister thunderclap of this intro and how it ushers the guitar into a deadly vibe. Then the trajectory of the mood stops and the remainder of the track descends into an alternate personality. The theme seems to project an introduction of various elements, from guitar, to synth, to drum kicks. Once brought together, and the synchronicity is taken seriously, it strives to finish off with a stronger note than the initial chorus.

Coin Theif:
I’ll leave the introduction up to you to decipher, but what I really want to discuss is the crescendo and everything after 1:18. I firmly believe that this could have been its own track, and I would have been obsessed with it. The richness of the electronic elements provides a breath of fresh air, away from the start of the track. The electric guitar is slowly introduced back into the fray and makes for an enjoyable ride towards the end.

Miracle Mission:
A slick, repetitive arpeggio and series of futuristic chimes grace our ears as we plunge into the next track, leading us into the trap of heavy guitar, drums, and bass. It’s almost like the electronic elements are under attack and forced to battle the 80’s hair metal nostalgia. There are parts of this track that seem to fall apart from the original theme, then get carried away into another.

Night Owl:
This next track smashes into the scene with fast-paced electronic chords followed by the thrashing energy of the guitar. Much of this track sounds to me like a boss fight. The cryptic variables within it prey upon the audible senses as an assertive means to grab your attention by the ears. There’s no need to take your foot off of the pedal, we’re deep within the confines of Dark Synthrock, and there’s no turning back.

The Runner:
Alongside the deafened choir raises a synthy cascade. Once the bass kicks in, our backs are against the wall and the progression of tempo hastens. The digitized down-tempo bridge is a playful and powerful method to keep both the guitar and synthesizer relevant rather than rivaling to claim their own territory.

Summoner:
Out of the vestiges of the darkest void emerges “Summoner”, which no doubt leaves me to assume that most of this album’s track titles reflect DnD references. The colorful melodies and enraged guitar chords synchronize into harmony over the punchy percussion. Laying waste to the litany of arpeggios and coordinated chimes.

Paladin:
Synthwave, Retrowave, and other sub-genres truly make it known that nostalgia can be masterfully applied and at times unknowingly refracted from a particular track as a mere reminder of something old but sounding new. “Call Me” by Blondie was the obvious motif used for this track. At about 1:00, I heard the lyrics alongside this particular chorus,
“Color me your color, baby
Color me your car
Color me your color, darling
I know who you are”
Listen for yourselves and let me know your thoughts. Is it a welcomed motif? Would a remix of “Call Me” be a badass Dark Synthrock cover? “Paladin” gives us a brief reflection of the possibility.