(Review) “Decent (Good) but, could be better” is a quote that could justifiably summarize this film. Wonder Woman 84 just premiered on HBO Max to polarizing reactions. Some say it was good and fun and others say it was a disappointment and some say its convoluted 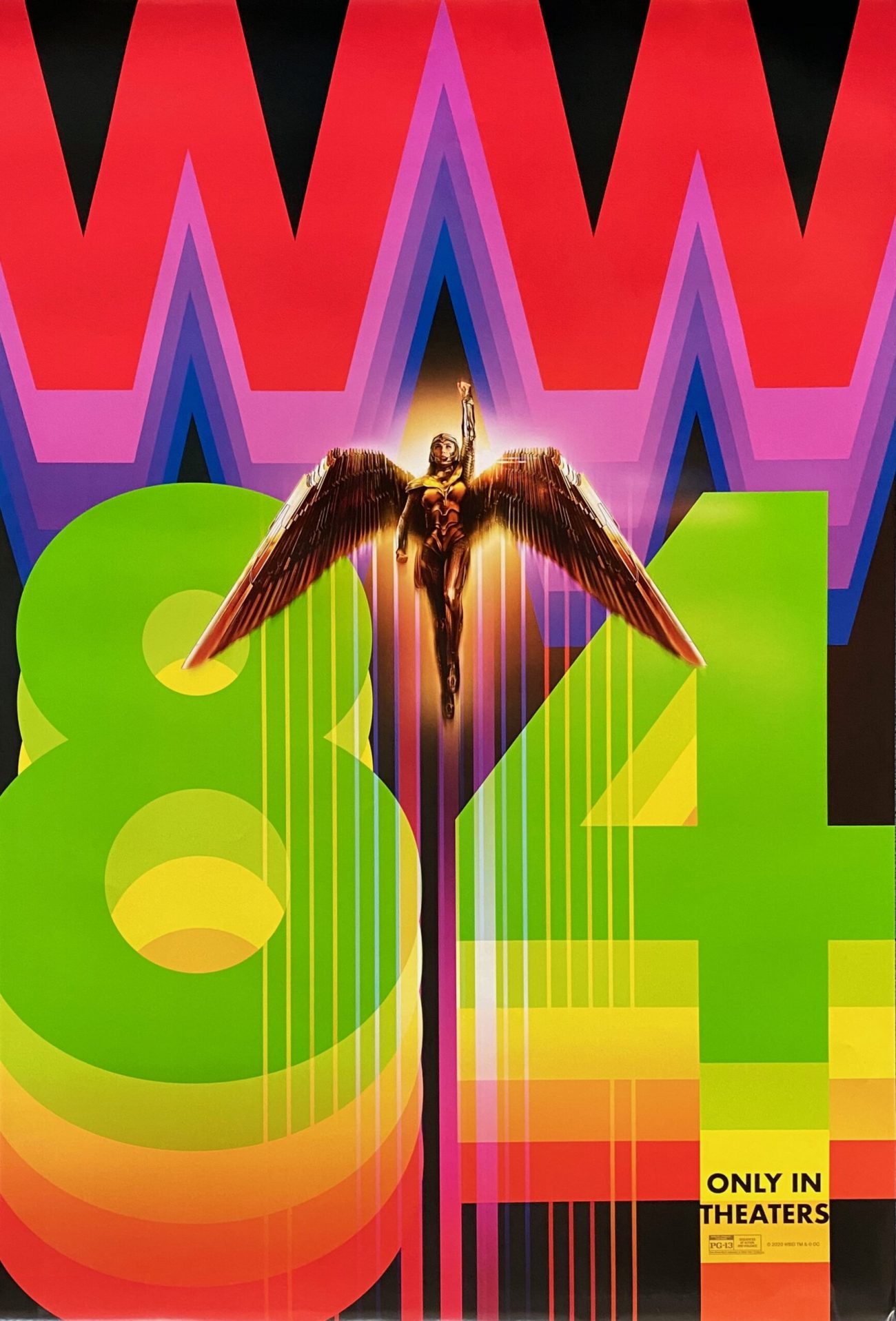 “Decent (Good) but, could be better” is a quote that could justifiably summarize this film. Wonder Woman 84 just premiered on HBO Max to polarizing reactions. Some say it was good and fun and others say it was a disappointment and some say its convoluted trash.  Well, I say….

Merry Christmas my retroactive readers… and happy New Year; the world is still changed for the worse and we’re close to emerging from our exile into the corporate funded new world dystopia just before us.

Wonder Woman 84 was broadcast to the world on HBO MAX as an exclusive for the streaming service.  No, I don’t really care if this rattles the ruffled shirts of the citizens of tinsel town – let us face the facts Theaters are OVER until further notice. Stuffing people into theaters during a supposed Pandemic just to save Hollywood is not on my to-do list and frankly Hollyweird has too many skeletons in their closets for me to care. If it streams it leads.

Wonder Woman was released on HBO and did meeeehh, sort of well. I mean some media outlets are calling it a moderate success… Well yeah considering the current condition of the world. The film cost around two hundred million to be made and as far as I know had barely made one hundred million. However, it did result in a big jump in HBO Max subscribers and we learned anything from BLACK MIRROR –that’s all that matters.  So expect a lot more of these types of shenanigans especially after everyone tunes in to watch Snyder’s Justice League cut.

Was the film good or bad?

I did like Gal Gadot.  Her acting is improving and she is able to express more emotions in this than the previous.  I did like Pedro Pascal and Kristen Wiig’s attempts to flesh out characters with their performances from a script that is so riddled with plot holes and mcguffins it might as well be a Mario Kart race track. But, that’s all I liked.

Bad news is this is isn’t a really good film. 84’ is very surface material and superficial many times during the duration.  The pacing is sluggish, the narrative is grueling and the script is lazy and doesn’t reinvigorate the things you liked about the first film. All you have is a shiny splash painting of vague nostalgia that was obviously inspired by that second Thor film, cheesy Hallmark moments and RomCom elements thrown into a Wonder Woman film were things just happen in an attempt to distance itself from the Snyder verse and revamp itself. The movie aims high but, falls on its face by the end.
One major reason for the script being so messy is because it was written by Patty Jenkins, Geoff Johns and David Callaham. The first Wonder Woman was written by Zack Snyder, Jason Fuchs and Allan Heinberg with a screenplay written by Heinberg. Geoff Johns as a scriptwriter is hit or miss and Jenkins, although a capable film maker, I feel was overly built up by the hype of the first film as a solid writer. And David Callaham should’ve never been in the writers’ room for this project. Callaham’s previous  films included the uncredited rewrite to Marvel Ant-man, all of the Expendables films, Zombieland:2 and 2005’s live action DOOM film; so tell me why he got hired. Jenkins and Johns was a rough pairing but some studio dickhead decided hire this guy to complete the triangle.

The film is sloppy. The first twenty minutes are disarming and misleading. You go into it expecting something decent and after a flashback scene setting up the films overall theme and a very fun action set piece taking place in a Washington DC mall, you are strapped in and held captive by dialogue and dialogue and there will be around a hundred minutes before the next action scene.

The film then revolves around a Mcguffin rock that grants wishes to whoever touches it. Pedro Pascal plays a financial tycoon seeking the stone to fulfill his wish for greatness, power and success fueled by his abusive and impoverished upbringing. Unfortunate beginnings that would humanize this antagonist if it were referenced earlier in the film not the climax. Maxwell seeks the wishing stone to be able to absorb the power of its potential and become the WISHMASTER. Maxwell Lord is basically a shallow self-centered materialistic dead beat father, the entire movie, willing to forfeit the entire world for his goals the whole friggin movie but, shoehorn in a hallmark ending to his character at the climax of the film to try and redeem his character. Props to Pedro Pascal for giving a solid effort here.

Trevor is back however in the dumbest way that could be unexplained in a film. So my guess is his consciousness was resurrected and implanted inside the body of some poor schlepp that looks like a Dollar Store Bruce Campbell action figure. Why this? We don’t know. Who was this guy? We don’t know. Does this vessels life matter? Fuck No; Even Diana doesn’t give a shit about this poor guys life. She is willing to basically live her life with Steve inhabiting this poor guys body forever because, “fuck it”, she wants what she wants.

Kristen Wiig who is a solid actress is also given nothing more than a rehash of Jim Carrey’s Riddler arc from Batman Forever. She is an attractive and educated woman who goes through life unnoticed and insecure in an era that is superficial and self-congratulating. Now, it would’ve been possible to do a drastic before and after wish difference if they did a Steve Rogers type transformation but, I guess “fuck it”. Wiig’s character goes from a simple ugly duckling into a super powered  and alluring swan after just one wish into the wishing stone and a quick wardrobe change instantly. Her only price is in exchange for power her humility is lost. Instead she turns into a vapid, self-obsessed villainess that like Lord will throw the whole world under the bus to retain or gain her desired greatness, elegance, strength and power.
Both characters each symbolizing the stereotypical narcissism and self-serving natures of their genders. Yes, in creating this powerful feminie antagonist to match Diana they’ve unintentionally created a villain that projects the stereotypes of the selfish entitled woman.

The story is a mess with people teleporting from one end of the earth to the other. Wonder Woman running in mid-air comically and constantly, an invisible plane thrown in for fan service, super armor that’s built up in a useless scene only to be ripped up by Cheetah and a movie that drags on and on and gives you absurd things happening that make no sense in terms of telling a coherent story while simultaneously contradicting things that have happened later in BatmanVSSuperman and Justice League. I thought she turned away from humanity after WWI? – Why is she running around doing Wonder Woman shit in 1984? She flies now? She didn’t fly in either Snyder films (Correction Justice League theater cut was directed by Whedon).  But, she now knows how to fly now cuz, well “aerodynamics”. She can swing on lightning bolts because, well “fuck it”, it’s cool. She fights Cheetah, who only appears in cat form at the friggin end of the movie in a five minute fight that you can barely see and the effects are meeeeeeehhh, the effects were okay by this point of the film. Hell halfway through the film my mind checked out and I just viewed the film as brain candy. To tell you the truth, I was laughing at things happening. 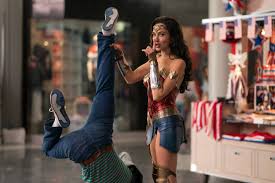 It’s not that the film was totally terrible. If you had low expectations then you might just think it is a one&done superhero viewing experience. Now if you are like the majority of mindless wave chasers then you’ll either love it or hate it. If you ask me – it was just alright for the price of nothing. I didn’t have to leave my house and spend $15 – $30 just to sit and watch this in a theater of twits and finger sniffers. I was home and saw it on a streaming service. So, it only cost me about two hours of my time.

A bad film that is bearable to watch is okay with me. The film is what it is. It is in no way worse than other films that have been released this year alone; Bill & Ted 3 is a worse film. I can’t even put WW84 in the same conversation with my most hated movies ever list. It was like laughing at a poorly executed punchline.  In no way did I become enraged during the runtime; that honor goes to films such as Birds of Prey, Cabin in the Woods, Suicide Squad and others. The problem with WW84 is not that it is bad- The problem is that the film does all the bad things I hate about Hollywood movies nowadays; it’s the most MARVEL type DC movie the WB has forced upon us. They’ve finally made a Marvel type DC film and I hated being a witness to it.

Please forgive any grammatical errors. It’s around two in the morning out here in the middle of nowhere. If you can make excuses for films like this then you can deal with a typo here n there.

In the meantime, Stay safe retro fans. Stay safe, stay healthy and keep your fingers on that REWIND button.