Created by the Italian comic book creator Hugo Pratt in 1967, Corto Maltese is a half-British / half Andalusian-Romani sea captain living in the early 20th century who routinely goes on adventures and finds himself mixed up in situations set parallel to world events in

Created by the Italian comic book creator Hugo Pratt in 1967, Corto Maltese is a half-British / half Andalusian-Romani sea captain living in the early 20th century who routinely goes on adventures and finds himself mixed up in situations set parallel to world events in history. The comics are highly praised as some of the most artistic and literary graphic novels ever written and have been translated into numerous languages and adapted into several animated films.

Here is one such animated film. I’ve chosen this one because, every one shares animation films from Japan mostly but, there’s a lot of people who never guessed that quality films, comic books and graphic novels have come from Europe. For example Metal Hurlant, Black Sad, hell even Mysterious Cities of Gold, The Incal, Metabarons and more. 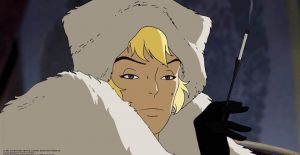 Directed by Pascal Morelli, Morto Cortese in Siberia is one of the better animated films if not the best of the bunch. With crisp animations and near R-rated action and mature themes, it grips you into it’s intrigue and drama.

With this book Hugo Pratt leaves behind the short story form he’d used for 21 interrelated tales and presents a truly epic graphic novel. In the aftermath of the Russian Revolution and the First World War, Corto Maltese is engaged by the Red Lanterns—a Chinese secret society made up entirely of women—to find an armored train laden with gold that belonged to the last Russian Tsar, Nicholas II. They aren’t the only ones lusting after the treasure. The adventure, which shifts from the hidden courts of Venice to the mysterious alleys of Hong Kong, from Shanghai to Manchuria and Mongolia to Siberia, also attracts regular and irregular armies, as well as revolutionaries and counter-revolutionaries.
– https://www.idwpublishing.com/product/corto-maltese-siberia 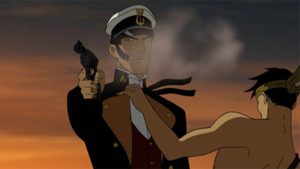 A running time of 92 minutes is long enough for this energetic and lush adventure. My favorites scene has to be the scene on the ship when Corto and his friend Rasputin (who resembles but has not relation to the actual Rasputin) are confronted by assassins. The story takes you globe trotting as they both trek in search of lost gold and glory. I’m recommending this to any and all fans of the Adventures of TIN TIN.
Below is the full playlist for Corto Maltese in Siberia.

Keep yourself safe out there and talk hard. But above all keep your finger on that rewind button.