Home / Movie Review  / Retro Movie of the Month: Beyond the Black Rainbow

What makes a film art? Is it subtext? The collage of mediums blanketed onto film with music and mood layering the textures, emotions and the suspension of disbelief? Well, the time has come. Yes, I did forget but, I remember now.  This month's Retro Movie is

What makes a film art? Is it subtext? The collage of mediums blanketed onto film with music and mood layering the textures, emotions and the suspension of disbelief? Well, the time has come. Yes, I did forget but, I remember now.

Spawned out of the grief of losing both his parents, Swedish sculptor Birgitta Ljungberg-Cosmatos and film director George P. Cosmatos (Rambo: First Blood Part II and Cobra), and funded from residuals from his fathers last film TOMBSTONE (1993). Beyond the Black Rainbow is a 35mm surreal mind-screw of colors, prolonged shots and transitions in lush panavision colors.

A young girl (Eva Allen) being studied and tested on by a mysterious scientific research corporation that is supervised by a mysterious and somewhat unhinged head of research scientist (Michael Rogers) for her untapped psychic potential. Yes, this was made before STRANGER THINGS. The runtime is 110 minutes and will feel longer due to the slow drip of tension and visuals. The shots are mostly long, giving the film a very claustrophobic and unnerving mood. 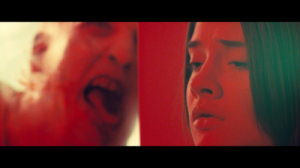 Jeremy Schmidt, keyboard player for Vancouver-based rockers Black Mountain, was invited by Cosmatos to compose the film’s soundtrack. “Evil Ball”, a track from Schmidt’s solo project, Sinoia Caves, was used by the movie’s director on a private screening held for Schmidt. A mutual appreciation for Tangerine Dream, John Carpenter soundtracks and Giorgio Moroder‘s music for Midnight Express (1978) and American Gigolo (1980) cemented their bond.[25] Schmidt also pointed out the background music from The Shining (1980) and Risky Business (1983) as musical blueprints for the Beyond the Black Rainbow score.
– Wiki

There are themes of control woven into the drama. Control being presented here via Adults controlling the young or Masculine over the feminine. Barry Nyle at the start of the film seems like a scientist with an almost paternal affection towards his test subject but, as the film progresses that veil is removed to be nothing of the sort and his true and mutilated nature begins to bubble to the surface. 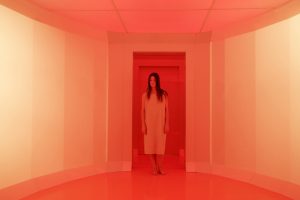 There is a very lovely film here with hints of all the films that were mentioned as musical influences to the score. The director being a fan of Michael Mann’s MANHUNTER and THE KEEP, Stanley Kubrick’s 2001 and the rest. The story of a young girl discovering her past and her strength and finally her liberation is a haunting, uncomfortable, acid-trip of a journey into the subconscious and the dark side of the third eye. Conspiracy Theorists will find a lot to chew on here within, with references to MKULTRA and a lot of the experimentation of psychedelics on human test subjects and research into psychic potential that has long been declassified by the C.I.A.

This is recommended viewing for anyone looking for something left-of-center. And a perfect start to a film career that was continued with MANDY (2018)

Keep your fingers on that Rewind button and stay loose, and stay easy…. and wear your masks.