Fort Apache the Bronx (1981) This will probably be the most serious movie I’ve ever viewed and reviewed for your nostalgic pleasure. Fort Apache the Bronx is a 1981 American crime drama film directed by Daniel Petrie. The film is about a hard-drinking, lonely veteran cop, Murphy

This will probably be the most serious movie I’ve ever viewed and reviewed for your nostalgic pleasure. 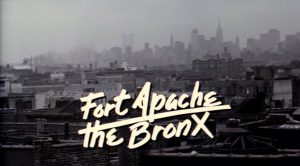 Fort Apache the Bronx is a 1981 American crime drama film directed by Daniel Petrie. The film is about a hard-drinking, lonely veteran cop, Murphy (Paul Newman), and his young partner Corelli (Ken Wahl), who work in a crime-ridden precinct in The Bronx. Although Murphy’s life takes a good turn when he falls in love with Isabella (Rachel Ticotin), a young nurse, the arrival of a new, law-and-order-minded police captain commanding the precinct, Connoly (Ed Asner) threatens to tip the neighborhood’s delicate balance into anarchy. Danny Aiello, Kathleen Beller, and Pam Grier play supporting roles. It was written by Heywood Gould and produced by Martin Richards and Thomas Fiorello, with David Susskind as executive producer.
It was filmed on locations in the Bronx.
– Wikipedia

The nineteen-seventies and eighties were turbulent times for the people of New York City. Before the Covid problem and the restrictions on society that came with it, before the towers fell and the Patriot Act open the doors and windows into our private lives, New York City was a bankrupt, filthy, impoverished and crime infested city with bombed out buildings, lack of order and neighborhoods controlled by local gangs of children from the neighborhoods. And among one of the worst areas in the city outside of Brooklyn was the South Bronx.

Fort Apache the Bronx is a very straight forward gritty 70’s style film about being a police officer in those times. Our protagonists and antagonists are all fleshed out and given motivations and flaws with some very witty and poignant dialogue. No one is truly pure in this film, it is very pessimistic and bleak but, with pockets of joy and sadness, regret and grief in the marrow of the stories and perspectives within.

Paul Newman gives an amazing performance that carries the emotional weight of the piece. 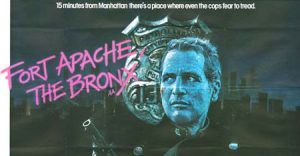 All shot on location in the BX and features legendary Puerto Rican writer, poet and actor Miguel Pinero in a minor but scene stealing role.

I loved this movie. It’s another slice of life from a time I lost a long time ago. It’s my memory lane and my nostalgic fix.
Stay safe, stay distant but don’t forget to be human beings and keep your finger on that REWIND BUTTON.