Well the time has come. A few weeks after being released in Theaters worldwide and crushing box office records internationally to become, was it reported by mainstream media as, the highest grossing R-rated movie of all time. As well tarnishing and shitting on all the 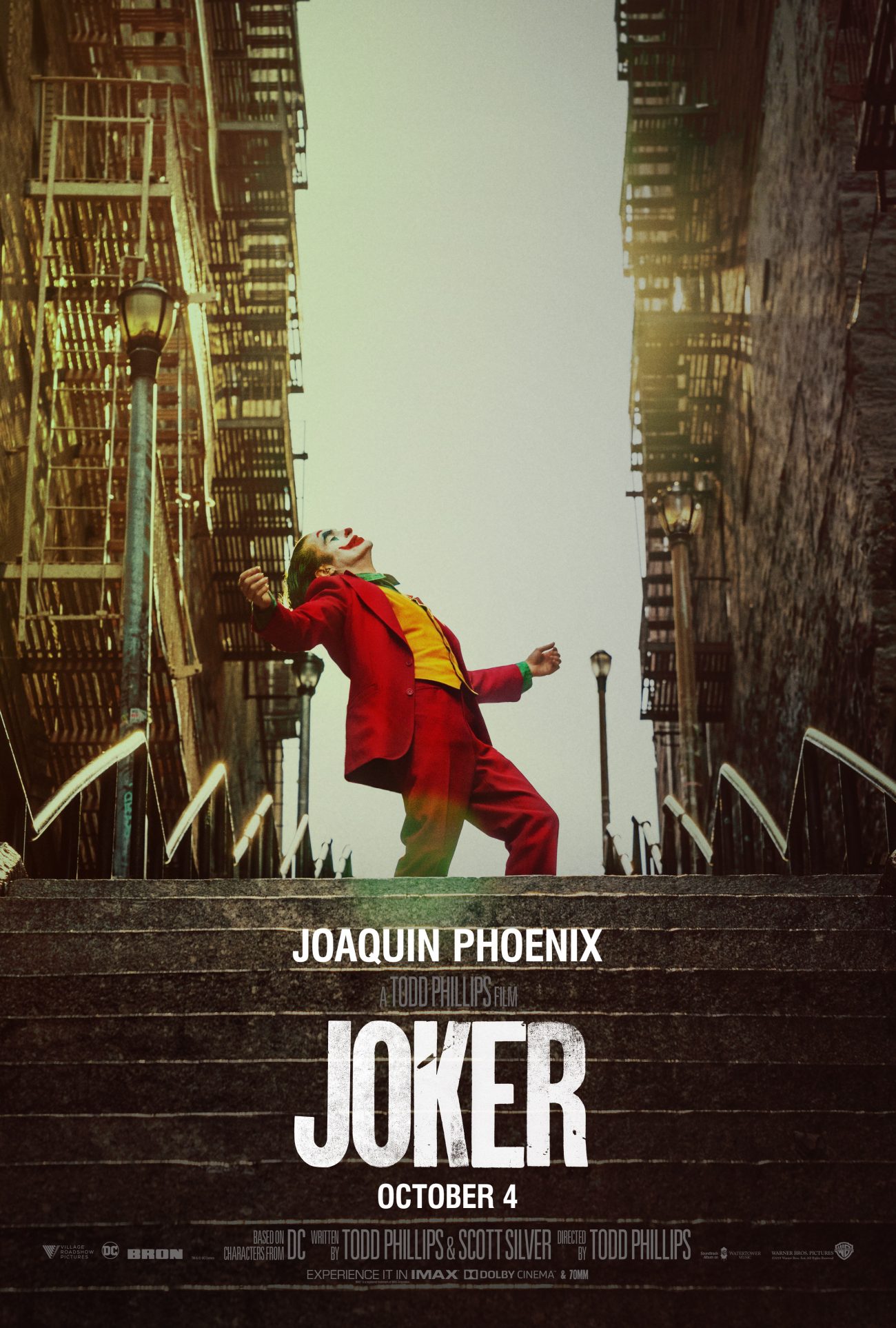 Well the time has come. A few weeks after being released in Theaters worldwide and crushing box office records internationally to become, was it reported by mainstream media as, the highest grossing R-rated movie of all time. As well tarnishing and shitting on all the hysteria and media propaganda warning people not to see this film “it’s too dangerous” and all that B.S. It’s time for my thoughts on the new JOKER film by Todd Phillips.

Now the controversy that was surrounding this film I will touch on with a smile but, I really wanted to hit the nail on the head about why this is possibly my favorite movie of the year, if not favorite throwback movie of the year. 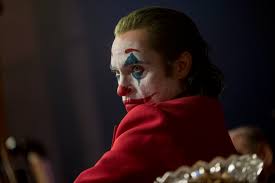 Where do I start? Let’s begin with cinematography, the film is photographed so beautifully with a smooth color palette of browns, blues, reds and set pieces all filmed on location mostly in New York City and other locations filmed in Newark, NJ. The director of photography Lawrence Sher (The Hangover, Garden State) deserves much credit for framing this film and all that goes into it as realistic and moody as it gets.

The centerpiece of JOKER is the acting. The bulk of the film rests on one persons shoulders and that one person that the film revolves around is Joaquin Phoenix. He infects every scene from start to finish with a tortured and effected performance; submitting his body and being into this shattered individual that’s merely holding together by the fingertips. The film is a character study of who, what and why an individual could become a super criminal.

Now do I think this is the ultimate and definitive Joker origin? No. Part of the Jokers appeal with fans for almost a century has been the mystery surrounding his backstory or lack thereof one.  Alan Moore’s Killing Joke did detail somewhat of an origin but, like MR.J says in the same book, “If I have to have a past, I’d rather it be multiple choice”. Whether you consider the Killing Joke or Joker (2019) to be the set in stone story is up to you. In fact the film will ask you the very same question once the Scooby-Doo ending rolls on screen – “Did this even really happen of are we the audience the punch line?”

Here is the story of Arthur Fleck, a middle-aged man suffering from a number of mental illnesses that may include Schizophrenia but most noticeable is his pathological laughter.

“Pathological laughter and crying (PLC) is a condition defined by relatively uncontrollable episodes of laughter, crying or both. The episodes either do not have an apparent motivating stimulus or are triggered by a stimulus that would not have led the subject to laugh or cry prior to the onset of the condition.”
– https://academic.oup.com/brain/article/124/9/1708/303196

“Pseudobulbar affect (PBA), or emotional incontinence, is a type of emotional disturbance characterized by uncontrollable episodes of crying and/or laughing, or other emotional displays. PBA occurs secondary to a neurologic disorder or brain injury. Patients may find themselves crying uncontrollably at something that is only moderately sad, being unable to stop themselves for several minutes. Episodes may also be mood-incongruent: a patient may laugh uncontrollably when angry or frustrated, for example. Sometimes, the episodes may switch between emotional states, resulting in the patient crying uncontrollably before dissolving into fits of laughter.”
– https://en.wikipedia.org/wiki/Pseudobulbar_affect

The latter was a result of head trauma suffered as a child. He lives with his mother, a former employee of the Wayne family, in an apartment building located in Gotham City’s version of The Bronx. Arthur works as a party clown for HAHA’s. He’s on several medications and has to appear for weekly Therapy sessions with an unenthusiastic shrink. Day after day of being detached from everyone around him and dragging himself up a tireless struggle to find his place and purpose in the world; a world that his mother has always told him he was meant to bring happiness to. His only escape and comfort is his imagination and his delusions.

The film is a descent of a man through the bowels of society and into madness, daring you to find some kind of empathy for Arthur; not so much for what he does but, for the person that was abandoned, dejected and ostracized by everyone around him. Its part black comedy, mostly tragedy but to be objectively honest is the story of someone finding purpose.
Grant Morrison once said on Kevin Smith’s Fatman podcast that Batman is the story of someone taking tragedy and finding purpose and meaning in it. Taking his symbols, attributes and resources to find purpose and meaning in this existence and that is button that Batman touches and pushes in all of us. That desire to be a hero and make meaning of our individual effections.  Now take that idea and flip it on itself; that’s the center of Todd Phillips’ Joker film, taking tragedy and finding purpose but, in a destructive way.

Todd Phillips really did craft together all the right elements to make this superb piece of art that will be deconstructed and analyzed for years to come.

Another key component of the film is the score by Emmy Award-winning composer Hildur Guðnadóttir (Chernobyl, Sicario: Day of the Soldado) which is its own character and drives the moody emotional notes of the film. The score was recorded before filming and was used on set during filming inspiring a lot of Phoenix’s performance in the film. The soundtrack gave the experience even more of a cinematic experience rather than just another comic book film. Tear inducing.

I’ve seen JOKER three times already and it’s damn near a billion dollar film by the time you’re reading this. Much deserved and earned achievement in spite of the media and what that CIA-Psyop called TWITTER had to say to mute the film for whatever reason.
Maybe all the paranoia and hysterics was instigated by Cancel Culture, maybe it was sjw’s, maybe it was sycophantic Disney fanboys obligated and compelled to protect the supremacy of their beloved brand or maybe it was just another attempt at creating a cheap incident via media, “creating the fires instead of reporting them.” It was a valiant yet impotent effort by all those CHUD’s mentiioned. Because the movie speaks for itself, it’s art. It’s fiction. It’s the origin story of a super villain and that’s what it is.
No one bats an eye when John Wick expertly and stylistically mercs hundreds of people in a franchise that is hyped and praised by the public as well myself. And I’ve never overheard soccer moms at the PARK PLACE MALL gossip and gasp over the gore, mutilation and murder of dozens of people during DEADPOOL. Actually, they line up to take their children to the film and even dress their sons up as the Merc with the Mouth.
However, I guess, if it’s violent at least make it tongue & cheek. Treat it like comedy, slap shtick, Looney Tunes, if people are going to die then dehumanize them-write them as two-dimensional bad guys, twirling their mustaches over jagged grins. Most people can only take violence if it’s sanitized, covered in sprinkles and deflated of humanity. People can only take the world if its sugar coated.

Perhaps that was the problem with the JOKER because, although there are only maybe seven deaths. Those deaths are presented as realistic as the real world can be. These aren’t demons, these are regular people living in our real world acting as apathetic and self-serving as we can and are in our society. If that’s not your behavior – it is behavior you’ve allowed and ignore on a daily basis. 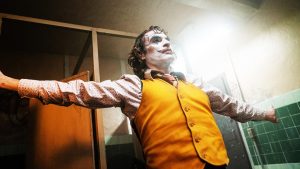 So in closing, I hope the directing, script, cinematography and acting receives all the nominations this year. And if any normie, or cinematic universe nerd try’s telling you this is too bleak and grim and isn’t a comic book movie, well I suggest you pull their nerd card and ask them, “You think this is dark? Have you ever read a Batman comic or any comic book, ever? Because, it gets pretty dark in the comic books and comics aren’t just for kids.”

It’s my favorite film of the year; unless Lighthouse (starring Robert Pattinson and Willam Dafoe) surprises me this evening.

JOKER directed by Todd Phillips and starring Joaquin Phoenix is a must see for everyone.

P.S. I love the fact that the man who made the GG ALLIN: Hated documentary back in the day is the one that directed this film in 2019. THUMBS UP, Punk rocker.