Duke Togo, the fictional adept hit man, who operates under the code name “Golgo 13” takes us back to a time when anime heroes oozed machismo.  Created by manga artist Takao Saito, Golgo 13 seemed to fill the void in Japan for a James Bond 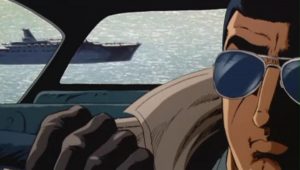 Duke Togo, the fictional adept hit man, who operates under the code name “Golgo 13” takes us back to a time when anime heroes oozed machismo.  Created by manga artist Takao Saito, Golgo 13 seemed to fill the void in Japan for a James Bond like character in terms of smoothness of operation. Duke is a stone faced consummate professional who will kill you sooner or later if you are unfortunate enough to make it to his hit list.  The weapon of choice of this legendary sniper is an M16. Apart from his personalized sniper rifle, he is proficient in a variety of weapons to get the job done or just to hunt down the hunters chasing after his life. The name “Golgo” is widely believed to be a short form of “Golgotha”, the hill near Jerusalem where Jesus was crucified. “Golgotha” is derived from the Hebrew word “gulgoleth” meaning skull, which also happens to be the logo of Golgo 13. Or to be more precise, the logo is a skeleton wearing a crown of thorns, bearing an obvious Biblical reference.  The number 13 of Golgo, who accepts a hefty fee for every kill, in this regard reminds of the 13th apostle Judas who in exchange of silver took the responsibility of assassinating Jesus. 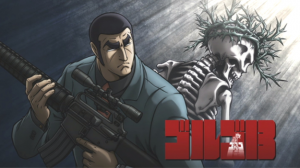 Released in the year 1983 under the much capable direction of Osamu Dezaki, “Golgo 13 – The Professional” is the maiden anime film adoption of the popular manga. Within a run-time of roughly 90 minutes, meant for mature viewers through out, it caters ample sex, suspense, plot twists and violence, all executed tastefully. The pace of the movie is apt allowing a nice flow of events with occasional dramatic pauses here and there. The animation work by TMS Entertainment looks absolutely engrossing for the most part. While critics often mock the rudimentary application of 3D CGI in the chopper scenes, the project deserves applause for being ambitious enough to be one of the earliest animation movies to employ the technology.

Use of 3D CGI in the movie 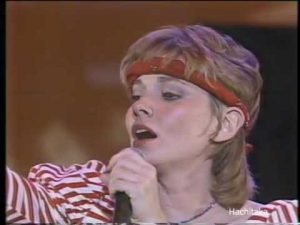 Cindy Wood performing “Pray for you”

Unknown to lot of fans, the catchy opening theme “Pray for you” was actually performed by a white American Playboy model, Cindy Wood.

The story of “Golgo 13: The Professional” is about Golgo surviving the perils bestowed on him by the oil baron Leonard Dawson who is determined to avenge the death of his son Robert, assassinated by Duke in front of him just moments after Robert succeeded him to lead Dawson Enterprises.

After successfully killing the crime lord Dr. Z in Sicily as objective of a different assignment, Duke faces several life threatening attacks orchestrated by the vengeful Leonard Dawson. From the mighty US military to the menacing genetically altered assassin Snake, Leonard Dawson would not hesitate to use all means to erase the existence of Golgo. Even the Pentagon, the FBI and the CIA were involved to help the oil tycoon avenge his son’s death.

While Golgo’s fight with Snake in the elevator has to be one of the finest anime movie duels of its time, the introduction of Gold and Silver, a formidable murdering pair on death row, comes in the form of simply awe-inspiring platinum class story telling. However, in the end it was tad disappointing. Although still extremely dangerous,  the pair proficient in martial arts did not entirely live up to the narrative. May be age caught up to them in prison, I would like to think.

The film tries to give the viewers a taste of what the legacy of Golgo 13 is all about. It does not attempt to be superficially deep or profound as it is not the purpose. Rather with excellent still shots and fluent cinematic one of a kind art work the film successfully narrates how unstoppable Golgo is even for someone like the vengeance driven wealthy Leonard Dawson who himself would stop at nothing, even if it means allowing his paid assassin to rape his son’s widow or involving his little grand-daughter with the butler to shoot Golgo in the airport. 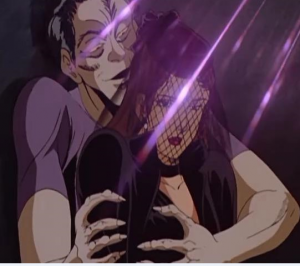 The segment which cements Golgo 13’s place as a ridiculously remarkable sniper is when he manages a near impossible roof top assassination from a beer sign. In such a short span the movie offers so much to leave one dazed.  Back in the day I was  smitten by the beautiful (and lethal) Italian blonde Cindy while she was skinny dipping all by herself, blending with the arresting nature as one. With a hunk like Golgo, a sultry woman like her added greater intensity to the intimate scenes. 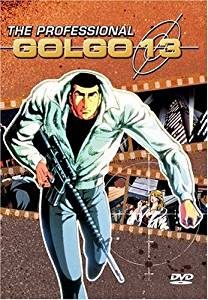 The trippy flashing lights during the car chase, the captivating sight of the neon lit urban-scape, the shimmering waters vibrating a life of their own – they all come together to make “Golgo 13- The Professional” a fantastic visual treat. My most favourite segment from the movie which has been etched in my mind as one of the most beautifully portrayed moments in anime history is when Golgo shoots Dr. Z at the sea shore making her fall from her running horse. The tide rush over her lifeless body at the shore and retreat while the rider-less horse run past the impassive Duke holding his M16. 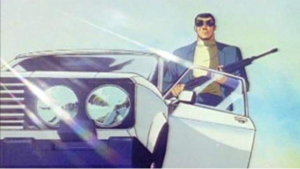 In the end when Golgo finally confronts Leonard Dawson overcoming all adversities inside his skyscraper the reason behind the assassination of Robert was at last revealed as the ultimate twist in the tale.

Those who love masculine central characters, those who crave an intense retro anime to travel back in time and lose track of it, for them the relentless  “Golgo 13- The Professional” is highly recommended.

See him shoot, watch him score and let him blow you away!