Flash Reviews of Godzilla: King of the Monsters & Dark Phoenix

The reason that these two films aren't getting their own individual review posts is because, well as quickly as I write my thoughts on each film is as fast as I forgot about them. Godzilla: King of the Monsters An actual justified purchase of a movie ticket. 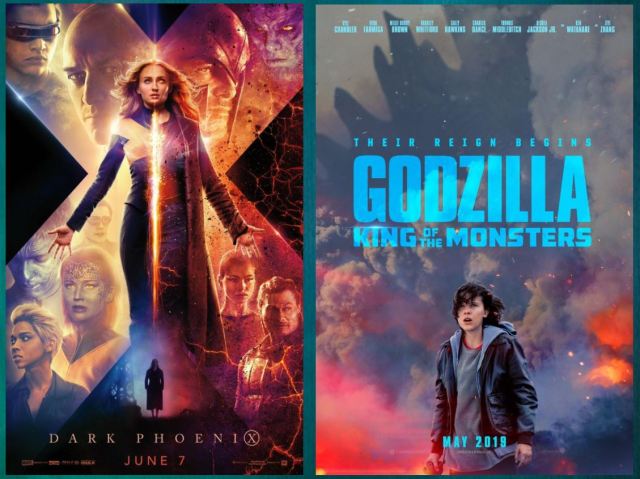 The reason that these two films aren’t getting their own individual review posts is because, well as quickly as I write my thoughts on each film is as fast as I forgot about them.

Godzilla: King of the Monsters
An actual justified purchase of a movie ticket. It looks pretty good with some really gnarly shots and set pieces. The monsters get much more screen time than in the previous film and the humans are put in their place as just serving to give the audience exposition and some comic relief. All in all a pretty cool GODZILLA film and that’s all everyone wanted.
COMPLAINTS: Too many scenes set in the dark or dark and snowy and dark and rainy. Too many cut away edits from the monster action. One scene especially was infuriating when the action is cockblocked by the obnoxious rear end of the whatever hellacarrier the humans were using to monitor the creatures.

Saw Dark Phoenix. It was meh. It was okay. The actors were okay and some of the set pieces were cool. But, it could’ve went darker, could’ve been R rated, the drama would have been effective if the the things that just happen in the film were developed in previous films instead of just being thrown together in two hours. Overall Nice try but too little n too late. I still found some enjoyment but it’s forgettable. One of the better films in the FOX studio X-Men franchise that has been majority pieces of horseshit; so the bar was set low. I liked Sophie Turner as Jean Grey and McAvoy & Fassbender are always great. It just felt like it was all too late. You can sense Jennifer Lawrence’s loathing being on set in this film n frankly who cared if she died. You started the movie not invested save for a $14 bucket of buttered popcorn between your legs just hoping for it to be passable. The writers couldn’t even remember how the last movie ended (remember the Phoenix scene). And that’s been the problem with Fox n a lot of Hollywood supe movies; a bunch of producers paying actors to pretend to be fans of the books that the film’s loosely adapt just to get your money. That’s life. So what? It’s done. It’s over. Goodbye.

And that’s that. Rewind me and throw me to the authorities.